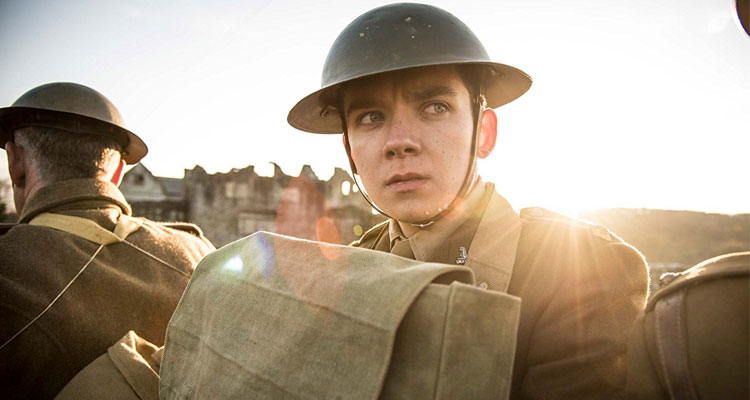 Saul Dibb is a London native whose films have included The Duchess, about British royalty, NW, an adaptation of Zadie Smith’s novel about contemporary Britain, and now Journey’s End, a drama about British soldiers during World War 1. The film stars Asa Butterfield, Sam Claflin, Paul Bettany, Toby Jones, Tom Sturridge and Stephen Graham. He told us about getting new insight into World War I and his struggles working with Harvey Weinstein on his 2015 film, Suite Francaise.

Journey’s End was a play written by R.C. Sherriff in 1923, and there have been four film adaptations of this story. It also influenced many war stories, such as Blackadder Goes Forth. What made you want to recreate it?

I haven’t seen the play – I didn’t study it at school or anything. I knew of it, but I didn’t seek out a production of it either. And there’s only been one film adaptation of it but I didn’t watch that because I didn’t want to be influenced by it. It felt like a really honest, very darkly funny exploration of experiencing war – blackly funny, in that they don’t want to talk about the elephant in the room. It seemed like a chance to make a film that was powerful and unsentimental about a war that I kind of knew about but didn’t feel like I knew it in the way it was being written. I liked the idea of focusing on this small group of men in this pressure cooker situation and getting to know them over a few days.

It’s such a fascinating portrait of life in the trenches – and different, which is impressive. Culture and society has been so influenced by World War I stories and films, we almost have a collective imagining of World War I, but this adds a new dimension.

That’s exactly it. I think we think we know it, but actually as I started to look into the details of these stories, I realised how much goes untold – or retold through films and pop culture in such a way that it affects our collective memory. By watching World War I films, I believed that trenches were built in straight lines, but they’re built in higgdly-piggidly, zig-zag labyrinthine lines. But for films, to fit cameras and tracks, the trenches are built straighter and wider. I also didn’t know that people went to the front on rotation, that they spent six days of every month there. Lots of those things, the gritty experience of it, the day to day experience of being in the trenches is lost. So I decided we should only see what the soldiers see, I wanted to limit the range and scope of vision. Often in war films you get stunning aerial shots of the battlefields, but I wanted us to experience only what the soldiers experience.

You can emotionally feel those limitations too, there’s a real sense of claustrophobia and dread. How do you create that sense of psychological tension?

I wanted to draw out things that were already there to make them even clearer: that a massive attack was coming, that these soldiers were on rotation at the front line for six days when it was likely an attack would come. I wanted to make it about these 120 men in this regimen walking towards this impending attack, not knowing when this attack would come, being drip-fed pieces of information about what other people have seen, which actually heightens their sense of dread.

A lot of war films tend to be about the action of war, but when you talk to people about their experiences of warzones, so much of it is periods of waiting, then periods of intense fighting and action that are brutal, often over very quickly, and have a huge impact – but are also hugely disorientating. I wanted to take those ideas an apply them to the film.

Your characters have such different reactions to this intense situation. Raleigh, played by Asa Butterfield, is wide-eyed and idealistic, Captain Stanhope (Sam Claflin) has become aggressive and jaded, while Lieutenant Osbourne (Paul Bettany) and Private Mason (Toby Jones) are desperately clinging to their sense of humour and normalcy.

Raleigh represents those jarheads, the fresh new recruits, coming in with idealistic ideas of heroism, but then what he comes into is a world of cynical, jaded, and seemingly very old men who may only be three or four years older than then but after all they’ve seen they’ve become twisted and bitter and damaged. And then it becomes about the psychological toll of waiting, and the effects of PTSD, which is clearly what Stanhope’s character is suffering from.

On the set of Saving Private Ryan, Spielberg deliberately made his cast train intensely – then brought in Matt Damon later so that the cast would resent him and that dynamic would play out onscreen as the jaded soldiers have to rescue a younger guy who hasn’t seen as much action. The dynamic between Asa Butterfield’s young character Raleigh and the older soldiers felt like that – did you deliberately cultivate that on set?

I think Asa was naturally tapping into that experience too, of being nineteen years old and coming on to one of his first adult films, exploring serious themes with a load of seasoned actors. It’s a very similar dynamic. He came in, knew his lines back to front and all the actors were like ‘oh god, we need to up our game now!’ But it generated a huge amount of warmth towards him, which is reflected in the film. We kept him away from some of the research and experiences where people were talking about PTSD so he had a more innocent view of everything. Everyone else had worn-through uniforms, whereas his was brand new and tailored for him, so he stuck out like a sore thumb! But that sense of care was also there, older actors like Paul Bettany took him under his wing, and you can really see some of that reflected. I’m always trying to create a set where people do feel comfortable and you can draw out those dynamics.

This film really is about how people deal with trauma and challenging situations. What has been the most challenging moment of your career, and how did you cope with it?

The most challenging time for me, and difficult time which coloured my work in the two films since and made them better, was on Suite Francaise. One of our producers was Harvey Weinstein, who was unbelievably difficult to work with, in all the ways that everybody knows. It’s all about power for him, and it was about being in control of the creative process. And since, doing NW and for this, I was in control of the creative process, and didn’t have someone trying to steer the ship in a different direction.

Obviously the reports we’ve heard have involved sexual abuse and gendered dynamics, but when you were dealing with him, was it more of him behaving in a bullying fashion?

Yeah, absolutely. My differences were obviously different than a woman’s. But what was so amazing is that there were these women brave enough, courageous enough to confront him, and that’s what no-one believed would ever happen because he’s so powerful, so litigious, and it’s obviously absolutely brilliant that it happened. And that it happened in his lifetime – often it only happens after someone has gone will this be confronted.

Journey’s End is in cinemas from February 2.