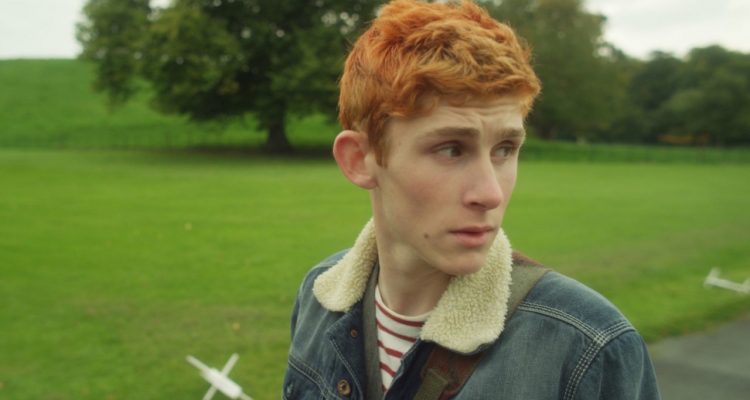 This week, Irish director John Butler returns after the success of ‘The Stag’ with ‘Handsome Devil’. Boasting an impressive Irish cast including Andrew Scott, Ardal O’Hanlon, Moe Dunford and Michael McElhatton, as well as young actors Fionn O’Shea and Nicholas Galitzine, ‘Handsome Devil’ is the story of two unlikely friends – rugby player Conor (Galitzine) and music fan Ned (O’Shea) – who, although they never struggle to accept one another, find their friendship put under pressure when peers and teachers start to get involved, and secrets come to life.

Movies.ie caught up with ‘Handsome Devil’ director John Butler to find out more about the film, what his thoughts are on rugby as a sport, and where the title of the film came from.

Where did ‘Handsome Devil’ come from?
John Butler: It’s partly autobiographical in the sense that I went to a school like that – a fee paying, rugby playing school where that kind of atmosphere prevailed – and I am gay, and I am really into sport, and I had difficulty in reconciling those two aspects of myself growing up. I always seemed to be told that you have to make a decision or a choice about one or the other; that you couldn’t everything in that regard. The wellspring for the story was that; being young and being at school, and coming under the influence of various teachers and trying to figure out how to navigate it.

So what are your feelings on rugby as a sport?
JB: I absolutely love rugby; I am a huge fan, and I am a huge sport fan in general. One of the things that I really wanted to take care of in the film was that the idea of the sport and the people who play it are respected as much as the other side, because it is a story about rejecting all those binary definitions like “jock” and “nerd”, stereotypes exist on both sides. The big thing that we did to take care of that was to get somebody to choreograph the rugby scenes who knows a little bit about it, and Brian O’Driscoll has played once or twice before, and knows a tiny thing or two about it. It was very important for me to feel like I had no axe to grind against any sport, but particularly rugby; I am a giant fan.

Did you take inspiration from any other films for ‘Handsome Devil’? There seems to be a touch of Robin Williams’ character in ‘Dead Poets Society’ about Andrew Scott’s character Dan Sherry…
JB: The most important thing for me is, in ‘Dead Poets Society’ has nothing to learn, and the story of my film is about rejecting all those binary definitions, including the one of teacher/pupil, old/young, wise/innocent. The idea is that kids are emotionally more open and accepting when they are young; they have cynicism bred into them by their environments. Unlike a film like ‘Dead Poets Society’, where the adults are these hermetically sealed pillars of wisdom, I wanted there to be weakness in the adults and strength among the children.

The film is comedic but has darker elements to it than your previous film ‘The Stag’. Was that a deliberate choice?
JB: Kind of, it was really just the next story that I wanted to tell. I knew it was going to be a comedy/drama, rather than a comedy. ‘The Stag’ is more a straightforward comedy, and this is certainly more minor key, so my eyes were open on that going in, but I am always going to make films that are somewhere on the comedy scale. I just love what comedy films can do, and I enjoy making them. It was conscious, and it wasn’t without a bit of trepidation [laughs].

‘Handsome Devil’ is a rather oblique title, where did it come from?
JB: I just wanted a title that didn’t hit any nail on the head, but was suggestive of the temptations and the power of masculine allure when you’re young. It doesn’t refer to any particular person in the film; in a way the title could, at different times, refer to five or six characters in there. The title came very early on in the process, and obviously it’s the title of a song by The Smiths.

You mentioned music, and music feels like the backbone of the film at times, was this all part of the writing process?
JB: It was really important because I think when you are a kid, clothes, hair, phone and music are the way to express yourself, and they are the only way you can assert control over your life. In every other arena of your life, adults are telling you what to do and who to be. I was telling a film that wasn’t time specific so there wasn’t any phone, and if you wear a uniform in school then your clothes are gone as an expressive tool, so then you are down to hair and music. [Music] was so important to me growing up, and it is still so important to young people; it’s a way of expressing yourself and it’s a way of discovering difference as well.

You have great actors in ‘Handsome Devil’, how did you go about casting the film?
JB: Many people I had in mind for parts when they were written, so the Andrew Scott part was written with him in mind. I was just lucky with the smaller parts; it’s really just asking friends to do a day’s work here and there, and that was the case with High [O’Conor] and Amy [Huberman] and Ardal [O’Hanlon] and people like that. It was getting really terrific actors to fill out the fringes, which I think is very important in a film; if you see interesting people in all those little parts, it makes the film feel more fleshed out.

With ‘Sing Street’ and ‘The Young Offenders’ and now ‘Handsome Devil’, there seems to be a trend in Irish cinema at the moment for telling teen stories and school stories, why do you think that is?
JB: I never really thought about that! I don’t know. I can only speak for myself, and for me, American high school films when I was young, were really important to me. I loved the films of John Hughes, I loved the Alexander Payne film ‘Election’, so all those films were touchstones for me. I always wanted to do a film in that environment, and I had this story from my past that I wanted to express so that’s where it came from for me. I would possibly think that there is a certain confidence in Irish film that exists in telling stories in those sub-genres; telling a school story that isn’t necessarily an exploration of what it is to be Irish as much as it is an exploration of what it is to be young. Irish cinema, generally speaking, has really leapt on in the last five or 10 years, and has the confidence to tell stories that it feels are good stories.

You have told two male-led stories so far, are you planning a film about women any time soon?
JB: I have written a script for a film called ‘Detox’, which is about two women who go away to a detox resort, and disastrous things happen to them. I would love to make that. I am also working on an ensemble thing with a female lead. I have to pass The Bechdel Test soon or I think I am going to be thrown out of this business [laughs]. It’s funny you mention it, because ‘Handsome Devil’ is actually dedicated to my sisters, in part to atone for the lack of female characters so far. It’s definitely on the list!

‘Handsome Devil’ is released in Irish cinemas on April 21st 2017. Watch the trailer below…