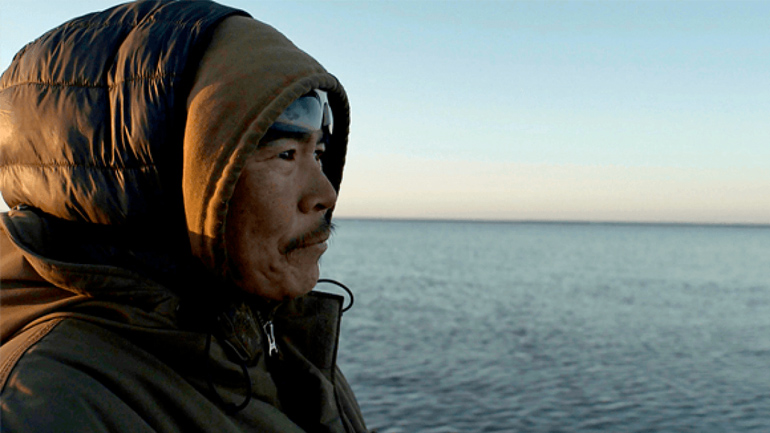 LOSING ALASKA from Irish filmmaker Tom Burke opens in cinemas around Ireland this October. It tells the story of 375 residents living in Newtok, Alaska who watch their homes disappear into rolling seas as winter storms steal their coastline and melting permafrost erodes the edges of their town. Director Tom Burke’s elegiac study follows the community as they struggle to maintain their traditional Yup’ik culture, a subsistence lifestyle of hunting and fishing, and build a new town on safer, higher ground.

How does an Irish filmmaker end up shooting in Alaska?
I read about the village in the Guardian newspaper in early 2014. They did a series of articles about this particular village of Newtok suffering from coastal erosion. Not only was the land falling into the sea, but they had also put in motion a plan to move the village. I thought that was inherently dramatic, the first element is the land is falling into the sea, the second element is forming a plan to move the village to a safer spot, the third thing was that they fell out amongst themselves along tribal lines. Those three elements together made for a good story, some of the photos from the Guardian made it look really compelling and I thought if I go over there with my camera and with that story, with those elements together, I thought I could make a very interesting and compelling looking documentary.

As a documentary film maker, do you often keep an eye out for interesting stories like this?
When you’re interested in storytelling you’re always on the look out for things that resonate with you, theres loads of good stories out there but only a certain number of stories that are interesting enough to me to devote 2 or 3 years of my life to. The thing about Newtok, especially when I read about the tribal dispute it brought home to me that really it’s that its the story of a community, and I felt its something I could take on because an earlier film I made in 2008 about the Liberties in Dublin. One of the interesting things about that film is that it tries to describe how a community works.  & I thought if I could take some of things I learnt from the Liberties and take them to Alaska I might be able to find a way through to tell the story. Its a climate change story which is a big story but its also the story of a village of 350 people. So that was appealing too, where you have a big global story told through the microcosm of a very small village.

The film is supported by Screen Ireland (the Irish film board), was it tough to get support for the film at the beginning?Screen Ireland were supportive from day one, they came up with development support which allowed me to go there twice in the early stage in 2015, that was invaluable, even to get to the village in the first place, it costs a lot of money just to send one person, we wouldn’t have been able to do it without that development support. We took another year where we tried to find external partners, international broadcasters or other partners and that was challenging because its a native Alaskan village, we found a logical partner should have been an American broadcaster because Alaska is part of America but that proved to be very challenging, so in the end we opted to keep the film small, and we went with screen Ireland support and section 481 and ultimately that gave us more control over the finished product.

How long did you spend in Alaska?
The film was shot over three years, there were seven trips between two to three weeks each. The trick there was the weather, the weather is massively important, each season does different things to the landscape and the water. So the people who live there can do different things, they hunt for different things or they move around in different ways. Their summer lifestyle is very different from their winter lifestyle, and then spring and autumn are a traditional lifestyle. In winter its all snow machines, ice fishing and heavy clothing, then in summer time its boats and outboard engines and long camping trips. The reason I went so many times was to capture as many of those lifestyle changes as possible. I first went in March when the average temperate was -35 degrees, they lived a certain way in that month, the next trip was in late July & they lived a completely different way, it was all about Salmon fishing and heron fishing that month.

What for you was the toughest part of making the film in those conditions?
It was difficult being on my own, ordinarily when you’re with a crew or you’ve got collaborators, you find the film through talking with the people that you’re working with. Even if its your sound operator or camera operator or producer, you’d have these discussions after a days work, you’ll try figure out together what you achieved that day and what it all means, being on my own we didn’t het to have those conversations on the ground. That on one hand was hard but on the other hand, because I had no one else to talk to I was welcomed in to the village more throughly, so people would bring me over for dinner or invite me over to play volleyball and basketball, so you ended up learning more. Greater intimacy was possible because I was on my own and to a certain extend they took pity on me. The relationships and friendships were deeper than had I gone with a big crew.

What was your initial discussion like with the people of Newton, did they get the idea/ concept for the film from the beginning?
They were very welcoming, they were particularly welcoming to an outsider who wanted to communicate their situation to the rest of the world, but on the first trip they thought I was just a news-reporter and they’ve had several of those down through the years. That model would be a news crew flies in, stays for a day or two then gathers up enough for a 2 minute news report and heads off. On day one and tow it was easy to get people to talk to me because thats what they thought I was doing, but on day three or four people were saying ‘Oh you’re still here’ and all of a sudden different doors would open up and the second conversation would happen and the third door would happen. Which then you really get into the meat of it, particularly with the tribal dispute , they wouldn’t have spoken about that with someone who was only there for a couple of days. it was only after day 10 that they began to open up about the two factions. Getting the access wasn’t particularly hard because they do want their story to be told but spending a lot of time there meant that access deepend over time.

How has the film been received around the world so far?
Has it played in Alaska, what was the reception like there?
Its done a very good festival run over the last 12 months, it premiered at IDFA in Amsterdam last year, its one of the big documentary festivals in the calendar, I was nervous the I learnt that they had scheduled it for five screenings, I thought we’re never going to sell those. But for whatever reason everyone of those screenings were full. That was a real stamp of approval for festivals in Sweden and Germany and Russia. So the reception at festivals has been very good. More importantly I brought the film back to the village last December, I flew there without cameras and we projected the film onto the wall of the gymnasium at the school. Half the village came out to see it on the first night and the reaction was very good, people were very happy with it with one exception, the old tribal leader Stanley Tom who was not happy, but I don’t think he was ever going to be happy with any film. I always think its very important at the end of a documentary process that you’re able to go and show the film to the people who are in it. They’re the ultimate test audience, they’re the ones who have to look it and recognise it as their story, thats important for me to hear that so I know I’ve done a truthful job or something that they are willing to stand over.

Are you still in touch with the villagers and how is their situation now?
There is some progress, the end of the film shows progress at the new site but the feeling is that its a bit too slow. I was talking to them last week, they are continuing to make progress at the new site but they still haven’t reached that point of critical mass where people could move over. The existing village is still in the same vulnerable state that it was at the end of the film.