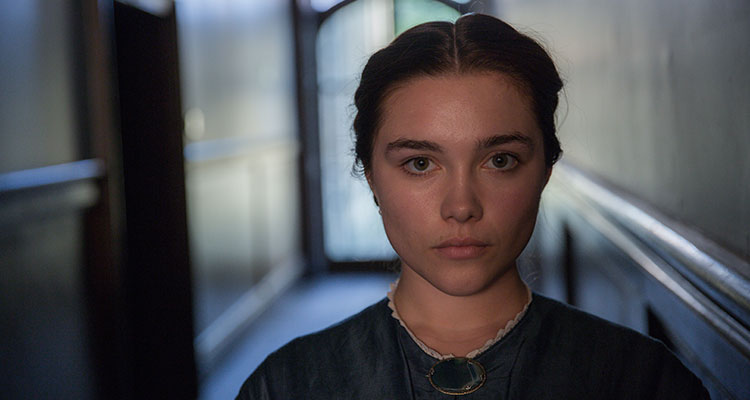 This week, William Oldroyd’s feature length debut, ‘Lady Macbeth’ is released in Irish cinemas. Based on the 1865 novel ‘Lady Macbeth of Mtsensk’ by Nikolai Leskov, the film is sure to make a star of its leading lady, Florence Pugh, who recently won Best Actress at the Audi Dublin International Film Festival for her work on the film.

‘Lady Macbeth’ follows Katherine (Florence Pugh), who is sold into marriage with Alexander (Paul Hilton), a caustic and rough middle-aged man who is unable to consummate their marriage. When Alexander and his father are both called away from their isolated house, Katherine at first roams the halls like a ghost in crinolines, but soon begins an affair with a farm hand; an affair that has far reaching consequences. We caught up with director William Oldroyd to find out more…

‘Lady Macbeth’ is based on a Russian novel. How did it come to be made in England?
William Oldroyd: I met Alice Birch, the screenwriter – we share the same agent in London, Giles Smart – and when I started working with Giles I said “Can you please introduce me to some of your writers?” So he sent me some scripts, and one of them was a play that Alice had written, and I thought it was fantastic. We met for a cup of coffee, and in her bag she had this book. She said “I heard you want to make a film. Why don’t you read this and tell me what you think?”, and it was ‘Lady Macbeth of Mtsensk’ and I knew there was an opera that Shostakovich had written the music for, so I knew a little bit about it. When you read it though, it’s a great story. What she does, and how modern she feels for the time, so I said to Alice “If you want to write a screenplay of this, then I would be delighted to direct it”.

Was it a long process to get the film from page to screen?
WO: Yes, but I have heard some development takes ten years! We applied through a scheme called iFeatures, which is an initiative for emerging filmmakers; it’s for people who have had some experience in shorts or commercials or theatre or TV, we knew there was a two year window before they have to get the next lot in, so we knew we would have to make it within two years. It’s good to have that kind of pressure; it really really focuses you. If we had been in development without a firm deadline, we could still be developing it now. At some point you have to just jump [and say] it’s good enough to send to cast, it’s good enough to shoot, and if it’s not we’ll work it out.

This is the first English language adaptation of ‘Lady Macbeth of Mtsensk’, how challenging or freeing was it, to have almost free reign on it?
WO: It’s great! Any theatre work I have ever done, I have tried to understand the writer’s intentions, and help actors to realise that, so that there is always a respect for the written word. The thing everyone kept saying to me was “You don’t have to worry about that because you’re the author now”. As a director that can make you feel very uncomfortable if you are not used to that, but actually I found it ultimately freeing in the edit; there’s no estate bearing down on us. It was great! We could take the best bits of that story and use it in the way that we thought it would be useful; if anything was not moving the story along we could trim and change, and adapt it.

When moving the story to the UK, what made you decide to set it on the moors in the north of the country?
WO: The book is set in Russia, that isolation is so key to her predicament, so what could we do in the UK? We found that Northumberland has always been the least populated county in the UK, so actually we needed somewhere that would look a bit like it did 150 years ago, that hasn’t changed that dramatically, and also help to create that isolation that we needed so desperately for her; so that she couldn’t just jump on a train. There wouldn’t a village very nearby where she could go and get help.

Did the Northern English landscape help to get the feeling of isolation in the film?
WO: Yes! We were in the middle of nowhere. That’s the great thing; we were on location for the whole shoot. We were staying in a village down the road but we were shooting in that place. Durham was 20 minutes away, so if you wanted to go to town you could, and go out and have a drink, but otherwise, when we were filming if you went and ran off in the woods, then there was nobody there… Apart from about 30,000 pheasant!!

Your cast is wonderful, in particular Florence Pugh who is just mesmerising. How did you go about assembling this cast?
WO: Shaheen Baig was our Casting Director and she had cast Florence in a film called ‘The Falling’. What we loved is that she obviously has this very very strong natural character; she’s feisty by nature, but she also could find that youthful optimism that we Katherine have at the beginning. There’s a transition, she becomes Lady Macbeth without being that person from the beginning, and what [Florence Pugh] can transmit and show is just wonderful. All of the actors are very very emotionally open, and that’s the best thing. They want to listen, they are finding things in each moment; it’s not premeditated, which makes it very real and honest.

There are times when the film is almost silent, but when the dialogue does come in, it is delivered in a coarse and violent way. How did you find this balance?
WO: That’s the hard thing, to write dialogue that feels vital but is also period. Luckily we are not having to resort to ‘Thee’ and ‘Thou’, which would be a big problem. There are different ways that people could contemporise period drama, you either go for electric music, or you go for quite radical camera movements. Very often everyone starts swearing all the time, and what we decided was we would contemporise it differently; perhaps in the way we had cast it, perhaps in the way in which we edited it. The other elements we would keep as faithful as possible.

Katherine’s transition from young and innocent, to someone darker and more cruel is very subtle. How did you create this?
WO: That’s Alice really; she’s so clever. In the development of this script so many people asked us “Why has she become so cruel? Why does she do these things? Why does she not befriend [her servant] Anna and actually have an ally?” That sort of violence, when you are living there, do you adopt the behaviour of your abusers, and I think that was definitely something. Is it bred in her or is it just by the fact that she is in that house and going through that ordeal herself.

You have several black actors in the film, and it is never made into a big deal, or even remarked on that there are black actors in this period drama, where one might imagine everyone was white. Was that a deliberate choice?
WO: We met everybody for all parts. That was something we wanted to do because in theatre it’s so common, so we thought we should reflect the reality of the time; it [was] far more diverse than people expect it to be. Because, to this point, period dramas up until this point have mainly had white people in them, there is a sort of white-washing of history, which was actually not what we were seeing when we were looking at photographic records. It was far more diverse at the time, and we thought we should reflect that in the film. We were meeting some people who were coming in to audition, who said “I have never done a period drama”. Golda [Rosheuvel], who played Agnes, said it was the first time she had ever worn a corset!

Obviously at the time you set out to make this film, you could not have known what was going to happen in terms of the recent Women’s March. Do you hope this is a line people connect in the film?
WO: I think that Alice always wanted to write the character of Katherine, she saw something in her that was so thrilling; that a woman would act in this way when pushed. The film you see is written by the person Alice is, if that makes sense, and so the fact that it [was] chosen to be at the UN Women’s Festival in London is not something that we had planned to do, but is so good that it has been taken to be screened there. That people see something in it that hey think is useful, that it adds to the debate.

What’s next for you?
WO: There are a couple of books… One I am very excited about, but it’s going to take a long time to be adapted. The other one is a contemporary story, it’s African-American, set in New York, written by Walter Molsey called ‘The Man in my Basement’, and it’s very very interesting. You could call it a chamber piece.

‘Lady Macbeth’ is released in Irish cinemas on April 28th 2017. Watch the trailer below…