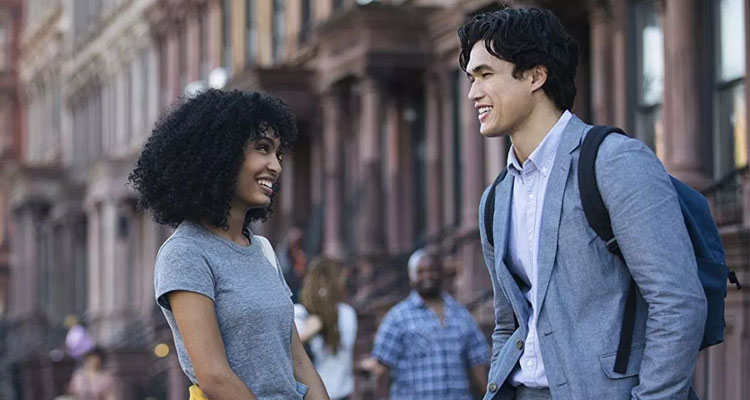 Based on a true story that found fame as a popular Young Adult novel, THE SUN IS ALSO A STAR follows a young couple, Natasha & Daniel, who struggle to stay together in the wake of Natasha’s family facing deportation back to Jamaica. We caught up with director Ry Russo Young to chat about the movie in advance of its opening in Irish cinemas on August 9th 2019.

Did your involvement come from reading the book, or did the producers come to you first?
They came to me with the first draft of the script and after I read it, I read the book. I loved the first draft of the script and then when I read the book, I was amazed by it. I thought there was just so much there, so much richness and cultural specificity. It felt like a story that needed to be told now. It is a great big, relevant love story.

Did you have any fears or challenges about adapting a beloved book?
I think there are always challenges when you are creating something where you want the book fans to be able to connect with what they see on screen. There was synchronicity there though because I loved the book and so there were certain things, that as a book fan, I wanted to be able to bring to the film. In the book, we fall in love with the main characters Daniel and Natasha so I needed the audiences to fall in love with them as well. The actors, Yara Shahidi and Charles Melton, really brought the characters to life. They fully captured their essence perfectly.

Daniel and Natasha are real people and the book tells their story. Was it hard to find actors who matched their real-life counterparts?
I thought it would be, but we found Yara and Charles quite easily and they really are perfect. They share a lot in common with the characters so they were able to bring so much to them. The first time I saw them together I was 100% that they were the right actors.

They have so much chemistry onscreen. Did that come naturally between them or was it something you worked with them to find?
I am a big believer in doing a lot of rehearsal before starting a shoot so they got to know each other through that, but that chemistry was natural and there from the start. There is an energy, a magnetism between them. You just can’t manufacture that. It was like they charged off each other. Rehearsal is so important though, to get actors to be comfortable with each other and to help them really understand the material. That can really help when it comes to shooting out of order, which happens a lot in filmmaking.

Are you a hands-on director or someone who likes to watch what the actors come up with themselves and then tweak it?
I am more of an actor’s director. I like to see what they do first. I am very collaborative with the actors. I cast actors for what they can bring to a role, not what I am going to do with them. I work by seeing the strengths each person has and then leaning into those strengths. I like collaborating because it lets you get the best from everyone. Take Yara for example, she was a millennial teenager not that long ago, she understands that way better than I do. I asked for their input into costume and music. I encourage participation. It makes things fun and makes everyone feel really part of something. It takes time to get to that really collaborative point. It’s a process.

The soundtrack is great and so relevant, is music important to you in a film?
Music is such a big part of my process; it is so important to me. Each choice is the result of an exhaustive search and involved so many decisions to make sure it was right for the scene, right for the tone and right for now. I have been working with the same music supervisor for 10 years and all of my films really use music. It is something we work on from very early, as soon as we get the script, we start sharing playlists. We didn’t want this to be the typical young adult movie that talks down to teenagers. We wanted to make this a fresh and relatable love story for today’s generation.

Did you spend much time with the real Danial and Natasha, Nicola and David Noon?
The first time I met with them we had lunch and it was such a privilege to see the real them. Seeing how close they are together helped me understand what I needed from the actors to work to recreate that bond. It allowed me to get into the truth of the story. We kept them in the loop throughout the process. They both understand that not everything from the book can be portrayed, you just can’t do that in film, it is such a different medium. It is about capturing the essence of the spirit of the book and hopefully, we have done that. They are psyched to see their story on screen.

The film is as much a love letter to New York. You use lots of locations we don’t normally see in film. Was that to give us a broader sense of the city?
Well, I love New York. I grew up there. When I was a teenager, I went to the café that Daniel and Natasha go to, I knew it had a history of poetry which is something important to Daniel. I am a big fan of films set in New York and I love the iconic sights that we see in them, but there is so much more to the city and I wanted to give audiences the chance to share in that. It was very exciting for me to be able to add to the screen lexicon of sights. And I would agree that it is a love letter to the city and to the diversity of the city. There are over 800 different languages in New York. It is the most diverse city in the world.

I love the lengths you go to show the diversity; it is so vibrant; we really feel the massive melting pot of cultures. It feels more important than ever to show that, but more than that telling the story of migrants is so relevant.
The first thing I look for in a script is the gut reaction I have to it and the next thing I do Is question, why now? Why does it need to be made right now? It has a huge effect on why I decide to do a project or not. I felt an urgency with this story. It is exactly what the world needs right now. It addresses issues that are really important to the moment we are in right now. It deserves to be shared.

There is a lot of history and backstory that literally comes on screen as still photos, where did that idea come from?
In the book, a lot of characters tell their story, almost as a monologue. We learn a lot about cultures through this, but there was no way we could have that many characters in the film so we came up with the idea of projecting it onto the screen as photo montages with voice-overs. We didn’t plan to do it, but halfway through shooting, I knew we needed something so that all that wonderful culture could be highlighted.