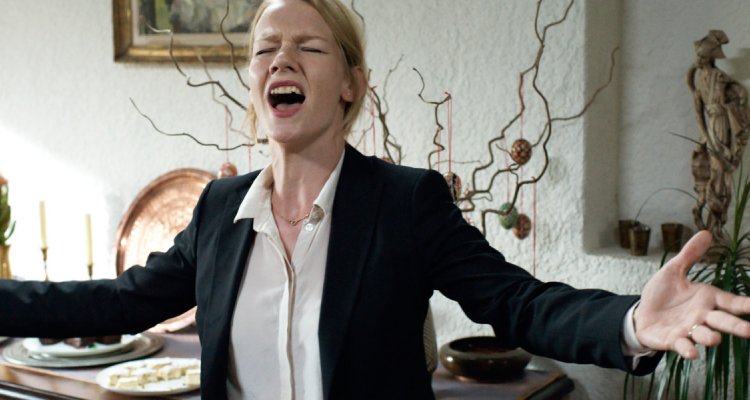 Fresh from being Oscar nominated for Best Foreign Language Film, German film ‘Toni Erdmann’ is released in Irish cinemas this month. An examination of the relationship between father and adult daughter, ‘Toni Erdmann’ tells the story of Winfried Conradi (Peter Simonischek), a man who loves a practical joke; painting his face, and putting in false teeth and convincing the postman that he is his own twin brother; a man named Toni Erdmann. When Winifried’s daughter Ines (Sandra Hüller) returns home from Bucharest – where she lives for work – a quietly observed moment makes Winifried realise how little he knows his daughter, so he sets out to try to reconnect with her the only way he knows how; with his alter ego Toni Erdmann.

Movies.ie caught up with director Maren Ade at the Cannes Press Conference of the film, to find out more about ‘Toni Erdmann’ and why she wanted to tell the tale of fathers and daughters.

In the film we hear that family is so complicated. Was that the starting point for the script and for the film?
Maren Ade: Yes I had the wish for a long time to make something about this family topic; about the roles everybody played, about all these ritual things that repeat themselves again and again, and to tell something about the wish to break out of this, to maybe start from zero. I found this father, this jokester, who brought in the possibility to tell this.

How do you write the script? Is it a collaborative process with your actors?
MA: First I work very long on the script, and when it’s almost finished I do a casting, and then, on the basis of the script, the work with the actors starts, and it’s very extensive and very long process too. Usually I leave a time after the casting to make the characters suit what I cast. I think, in that case, there were not so many changes, but I tried to go with them. Also during shooting I rewrote certain things. We had a long process of rehearsing and it is good that [Sandra Hüller and Peter Simonischek] are both theatre actors, very radical theatre actors, so they are used to this process.

The film is very subtle and emotionally clear, even though it often veers on the absurd. How did you approach creating this on screen?
MA: I found out during writing that a father/daughter thing is a very emotional topic. There’s a lot of secret aggression, secret longing, secret fears in that, so I could use that very well. The most important thing was to be precise about what happens with the characters, I try to think everything out of the characters so much that it’s maybe sometimes not very likely, but it should always be possible, and that the impulse is perfect, in a way. We worked very hard to have the emotional transparency so that you could understand the inner conflict or the insight of the characters, but on the other side, to be very precise in terms of the story.

The film was so well received at the festival screening, that there was applause when Sandra’s character sang The Greatest Love of All. How does that feel?
MA: I thought about it when editing the film, or even before when we were shooting the Whitney Houston scene, and I thought “Might there be applause?”, and I was not sure how I would like that. I was like “What would that mean?”. It’s a great thing when people applaud your film.

How do you feel about ‘Toni Erdmann’ being a German film at Cannes?
MA: For me, it’s my third film and it’s a great honour. To be here is what you always dream of as a filmmaker. It feels good because I have a feeling that they might give me carte blanche for the next film! [laughs] It feels good because there are so many great directors this year, a lot of them that I like a lot. If I can make the German film industry happy, it’s also good.

‘Toni Erdmann’ is released in Irish cinemas on February 3rd 2017. Watch the trailer below…