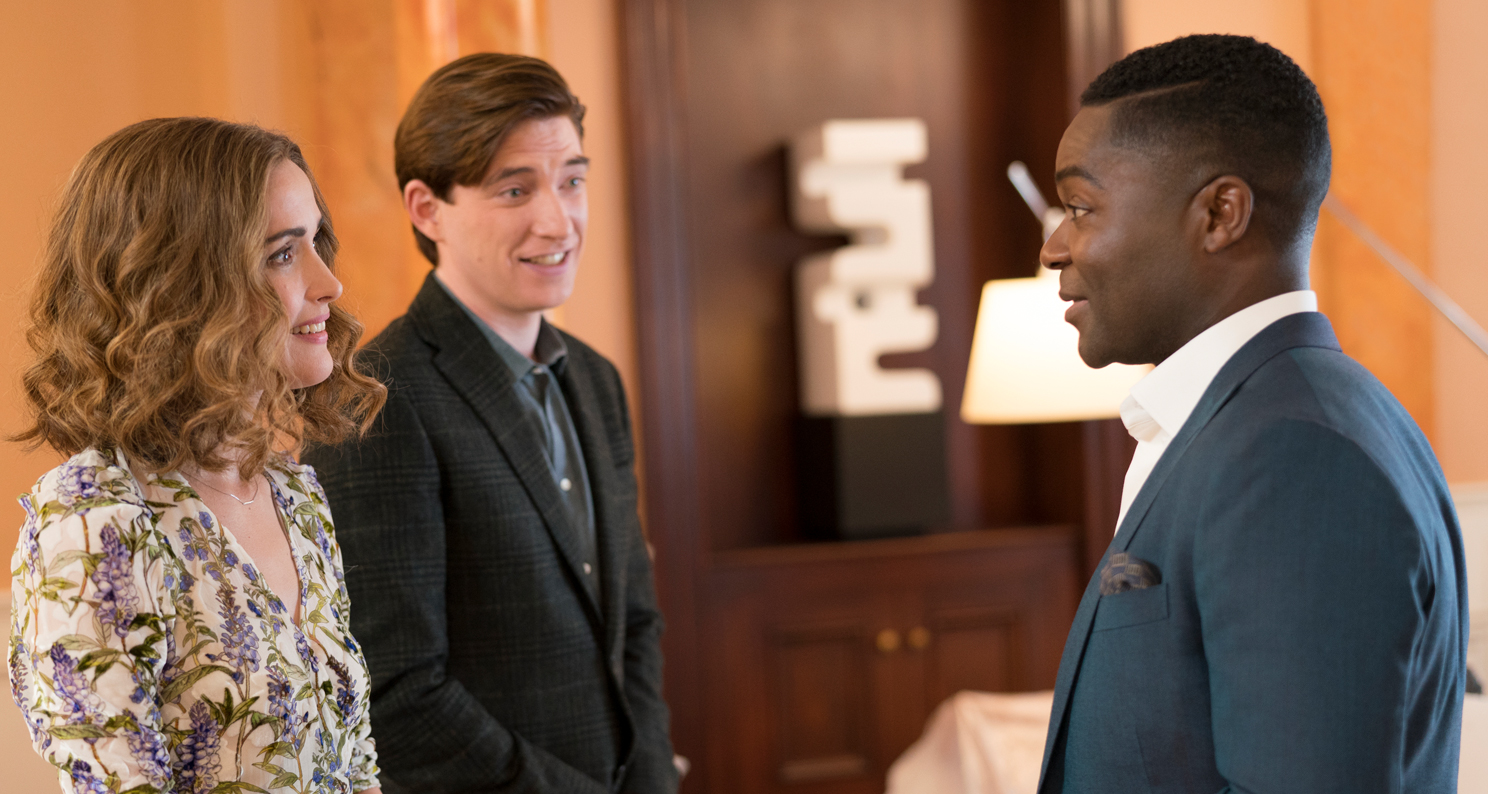 Based on the writings of Beatrix Potter, ‘Peter Rabbit 2’ see’s Peter back on the big screen trying to shake off his mischievous reputation. This time around the villain of the movie is David Oyelowo, who was convinced to take the role by his young daughter.

We were lucky enough to visit the film-set to see the magic of the film being made and we got the chance to talk with David about how he prepared to play a baddie in this highly anticipated sequel opening exclusively in Irish cinemas in June 2021!

David, Your daughter is a big Peter Rabbit fan, is that right?
Yes, that would be a huge understatement for her. We had all seen the film together and we really loved the film. But I’m about to direct to film and when this lovely offer came in, I was debating whether I could fit it in, just with the prep for my film, and my daughter overheard the conversation with my wife and freaked out and said, ‘Dad, you have got to do that movie, you cannot not be in ‘Peter Rabbit 2’. Oh, my God. We then immediately started watching it again on a loop, so there was just no. Basically, it’s the only film I think I’ve ever done that they’re truly excited about.

You’re the villain in the film. How did your kids feel about that?
I didn’t want to shut down their excitement. Yeah, my daughter in particular is going to be very upset with what I do to the rabbit. Let’s just say that my character does not have the rabbit’s best interests at heart.

Is there a balance for playing a character like that in a kid’s movie, that you have to make them mean, but not too mean, that you might scare kids?
Will Gluck, our director is just brilliant with the balance generally of the movie. I think what I really loved about the first film is that, they’re based on these Beatrix Potter characters, which I certainly grew up with. But the film has a contemporary feel both in terms of the humour and the music and  some of the themes within the movie. Being someone who has four kids myself, I really appreciate a film that I can truly see with my family and there’s nothing in there that I sort of having to cover their eyes or their ears, but it’s also has a little bit of edge to it as well.

Did your kids like the  Beatrix Potter books as well as the film?
My kids are indicative of what is the case for a lot of people with these films, I think Beatrix Potter and Peter Rabbit was more pervasive when I was younger. And it’s now introduced them to the books, but its probably more to do with them having seen the film than the fact that it’s now a staple for kids and my kids are growing up in America, so they’re even less likely, but now I know that they are far more aware.

With your daughter being a fan Has she had the opportunity to come on set? Or do you find it isn’t as interesting as you might think, because the animals are only added in afterwards.
Oh, no, quite the opposite. No, we we filmed most of the film in Sydney and my, my two younger kids came, and it’s the first time I’ve seen my daughter starstruck, not for the rabbit but for Domhnall Gleeson.  She saw him and then got very shy and sort of hiding behind my leg, and she’s just not that person. Because she’s been on so many film sets and she couldn’t care less of who anyone is, and she was just acting really weird asking ‘is the man who blew up the rabbit’? He’s the only person I’ve ever seen her excited to take a photograph with. So yeah, that tells me how much she loves the film.

Can you tell us about the physicality of the role? Also, how has it been acting with cardboard cutouts? How do you prepare for doing that?
Well, on the page of the role felt far less physical than I anticipated. (Laughs) I certainly didn’t anticipate falling over doing backflips, falling out of cars, being kicked in the groin by rabbits. As much as has been the case, and that’s a lot of fun. In my career thus far, there hasn’t been a ton of that, you know, physical comedy, comedy in general. But it is quite the learning curve, because I did a film called ‘Rise of the Planet of the Apes’ where you were interacting with figures you knew were going to be computer generated afterwards but you still had Andy Serkis in a costume with dots on it. So you were reacting to that. With these rabbits it’s an extension of that where we act in a bubble but very much being guided by Will.

Does it take a little moment just to get into that zone?
Yeah, it definitely took a moment for me, but the great thing was that all my scenes are with Domhnall and Rose, either together or individually and they are pros now, having done it once before. I’m a quick learner and so watching what they were doing. The tricky thing is initially you are acting with the sort of mannequin, of the rabbit there. So you are at least interacting with something. But then they take it away and do some sort of ghost pass. And that’s when it’s really terrifying because you’re suddenly now a mime artist, because there is nothing there and you’re having to interact spacially with something that you have to imagine what you’re going to do. And these incredibly clever people from animal logic, of course, are going to take it even further. And so you’re trying to really find that balance to give them creative room that you’re not locking it down, but also being truthful in the moment. So yeah, even just explaining it is terrifying, but fun doing that kind of stuff.

It sounds like a very pure form of acting in a way?
It can be,, it’s a lot of fun, but honestly, it wouldn’t be if Will didn’t have such a clear vision of what he wanted because then you can feel silly acting very energetically with something that isn’t there. But he absolutely knows what he’s looking for and so that that makes it all right.

What advice did Domhnall and Rose give you being the new kid on the set?
Yeah, Rose & Domhnall have been very smug about the fact that I’m the newbie. They could they could see me floundering initially with the rabbit. But no, they were great of course, to be honest, just watching how much ease they both have interacting with the with the rabbits was great, but also quite humbling. You can look at these actors doing this film and then you have this reminder of the film is called ‘Peter Rabbit’. I haven’t met the star of the movie yet, and now they’re doing his close up, but he’s not there.

Apart from him being a villain, what can you tell us about your character in the film?
Yeah, I can tell you his name is Nigel basil Jones, which for any black person on planet Earth, you know that that’s an affectation. I didn’t know any black person called Nigel basil Jones. So that probably tells you something about him and his estimation of himself, right? And he’s a publisher, who is very enamoured with Bea’s first book and therefore has, shall we say big plans for the book going forward.

Is there much research you can do for a role like this? Would you go and watch maybe some classic films from from kids movies, maybe Hugh Grant in ‘Paddington 2’ or someone like that to to see how you might channel your your character?
Well, what I’ve found about playing any kind of, quote unquote villain, is you don’t want to play a villain, you just want to play a real individual who has his own desires, wants, and rationale for why they’re doing what they’re doing, and leave it to the audience to decide whether they they’re a villain as it were.

Unlike playing a historical figure or something like that, this is definitely the kind of role in my opinion, you don’t want to go and study what other people have done in a sense, because it’s a very fine line playing the antagonist in anything, because at the end of the day, you’ve got to like them as the actor, you’ve got to understand them and you’ve got to play the truth of them. Thats the only way it really works. If I go in there and I start twiddling my moustache and arching my brow. I’m dead. So no,  it was it was what was on the page was watching the first film just to get the tone and the feel of it and then just being very open to two worlds direction.

How has it been going in preparing to direct your own film?
Every opportunity you have as an actor, if you’re interested in directing being on set is a learning opportunity. And actually, I’ve heard it said that actors have the best training to be directors because they’ve been on more sets than any director. Really I am blessed  to work on as many things as I have. So it’s actually been great, you know, to be on set, especially working with a director who’s very clear about his vision that’s been exemplary for me.

PETER RABBIT 2 is at Irish cinemas from June 2021