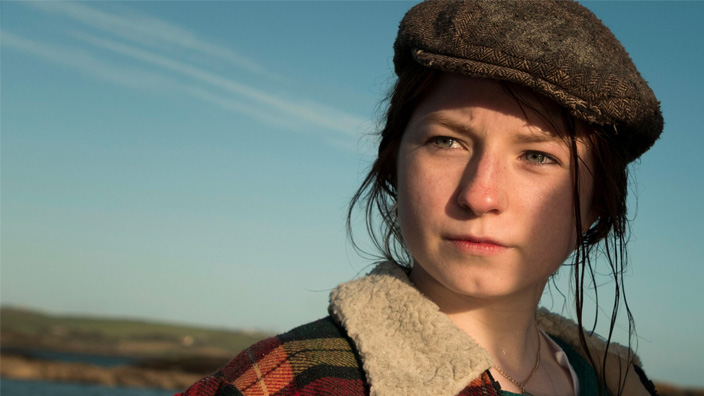 INTERVIEW – Carmel Winters talks about FLOAT LIKE A BUTTERFLY

From the producers of ONCE and SING STREET, FLOAT LIKE A BUTTERFLY is a powerful and timely story of a girl’s fight for freedom and belonging. Written and directed by Carmel Winters, the film stars Hazel Doupe, Dara Devaney, Johnny Collins, Hilda Fay, Lalor Roddy, Noelle O’Regan, Packy Lee, Michael Collins.

What inspired you to celebrate the strength & bravery of women in the Irish travelling community?
I wanted FLOAT LIKE A BUTTERFLY to be a film that celebrated all women’s bravery and strength.  And I think it’s about time we saw a Traveller girl in a heroic role in Irish film.   Traveller women have endured, survived and overcome so much in real life, I think it’s vital to reflect that onscreen.  I worked with wonderful, inspiring Traveller girls and women in making this film.  It meant the world to see how proud they are of our film.

The film has been described as a gender reversed ‘Billy Elliot’, what do you think of the comparisons?
‘Billy Elliot’ was a hugely entertaining film with a big heart – and it’s also supremely skilful in how it delivers its meaning, so I’m glad FLOAT LIKE A BUTTERFLY inspires comparison.

You developed the story in the early days of Katie Taylor’s rise to fame, how much was the Irish boxer an inspiration for the story?
I don’t think FLOAT LIKE A BUTTERFLY would exist without Katie Taylor flying the flag for a girl’s right to fight.

You’ve mentioned the film is about the underdog in all of us, can you tell us more about that?
Frances has to dig deep to find the strength and courage to stay true to herself.  I think at some point in our lives every one of us – no matter how privileged – will find ourselves up against something bigger and more powerful than ourselves.  Something that makes us summon strength we didn’t know we had in order to overcome whatever it is that threatens us.  I hope FLOAT LIKE A BUTTERFLY affirms people in their struggles, and gives them courage.

Can you tell us about the casting of Hazel Doupe?
Casting director Louise Kiely introduced me to Hazel.  I was gobsmacked.  She reminded me of Jodie Foster when she was young – the same blisteringly intense focus and extraordinary mature talent in someone so young.  I am so inspired by Hazel.  The world is a better place for having her.

Lead actress Hazel plays an expert boxer on screen, what type of training did she require for the role?
She brings immense dedication to her craft as an actor.  She trained prior to her audition and when she got the role she trained with a boxer Clara Fraher who used to train with Katie Taylor.  But Frances her character isn’t an expert boxer – we had to remain true to that.  She wants to fight but she has never been trained, never had a lesson – it’s very much a raw passion for justice she has.  A want to fight back and stand up for herself and her family.

The film has played at festivals around the world, what has reactions been like from global audiences?
Audiences of all ages and gender have responded to the film with great love and emotion.  There are lots of gasps and tears and cheers and we’ve had lots of standing ovations too.  Audiences are so roused by the film, it’s gorgeous, and it’s always one of the top scorers in polls of audience favourites at festivals.

You married production designer Toma McCollim just before the film’s premiere at the Toronto Film Festival, how did that come about?
Well as my mother said, after 18 years together it was about time!  And we figured that if we could survive making a film together we could survive anything!

What challenges did you have setting the film in Ireland in the 60s/70s?
There are so many changes even in the landscape – the fencing and wiring is so different and the cows all have those big yellow tags in their ears now.  But I absolutely loved the world of the 60’s and 70’s in Ireland so it was well worth the effort.  Toma McCullim the production designer roped in the entire community around Ballydehob to share family heirlooms and whatnot so everything you see on screen is the real deal.  And audiences I notice really respond to that.  Especially people in their 40’s like myself or older who had similar items to the ones they see on screen.  It’s a real trip down memory lane.  “Oh I had exactly that hat!”  “I had one of those perfume bottles”.   “My father made a pot stand out of horse shoes the same as that one!”

What type of research was involved to create the look of the Irish traveller community in the 60s/70s?
Luckily there are so many different photographic collections to draw from, taken during that period.  Photographers from here and also from all over the world captured wonderful images of everyday Traveller life so we had wonderful detailed, authentic blueprints to work from.

The film is shot close to your home in West Cork, how did you write the area into the story and were you excited to showcase the scenery and landscapes of the area on the big screen?
Well when you put places you absolutely love on screen I think there’s a good chance the audience will love them too.  And it’s a source of great pride to everyone in West Cork to see where we live and love looking so beautiful and magical on the big screen.

Your family were also in the film, including the horses and dogs, tell us about their involvement?
It was a case of all hands on deck.  There are lots of horses in the film and my brother Michael Winters is a very well loved horse trainer in Ireland – so he plays the horse trader.  I needed someone who was a very capable rider for the character who is found as a match for Frances so I auditioned several great riders and cast my nephew Finny Maguire, a super-talented up and coming jockey.  My nephew Kealan has a small part as another bareback horse-rider.   As well as lots of other dogs, my own two dogs are in it, Lucky and Brutus.  Brutus was killed by a car a few weeks ago so I get very emotional when I see him on the screen now!

You recently had the opportunity to have writers room placement in LA, with access on shows like ‘The Big Bang Theory’ & ‘Jupiter’s Legacy’, how was that experience?

It was fantastic to see top talent in action together.  I’m very keen to write large scale television dramas, and to bring great teams of writers together to really support and prompt each other to make the most live and relevant drama we can.

FLOAT LIKE A BUTTERFLY is at cinemas from May 10th