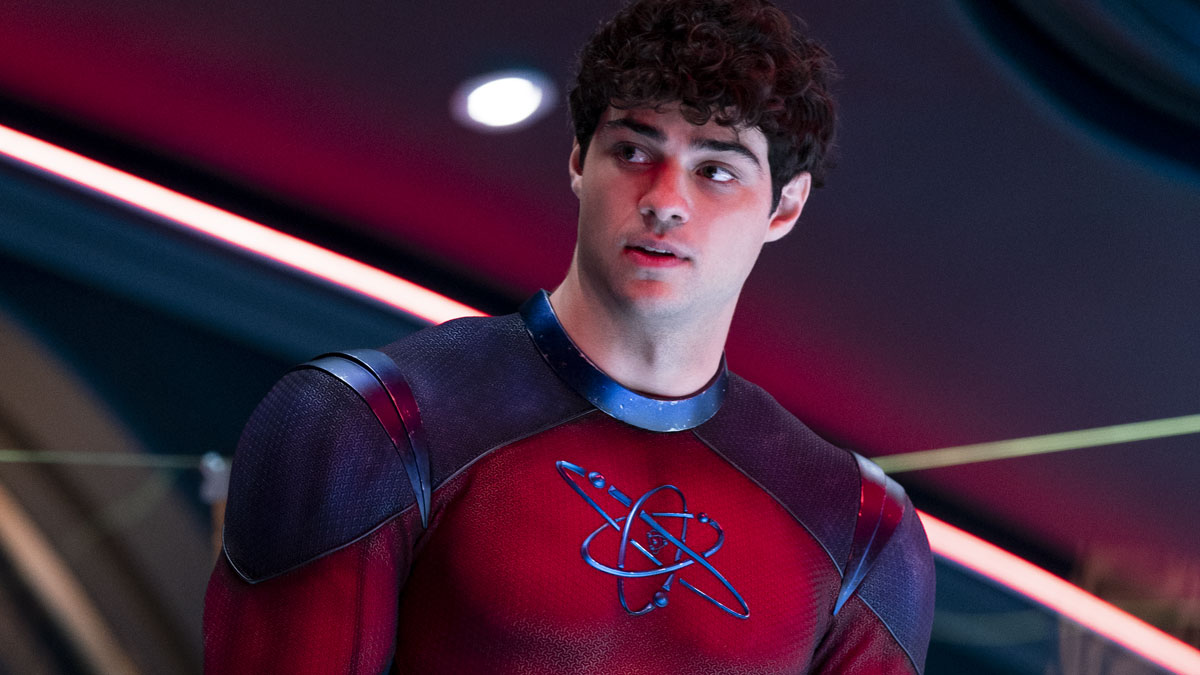 ‘Black Adam’, a passion project of actor Dwayne Johnson, gets a big screen release this October with an all star cast that includes Irish actor Pierce Brosnan as Doctor Fate. We caught up with actor Noah Centineo, who plays the role of Al Rothstein / Atom Smasher, a young superhero who can transform his molecular structure to grow in size to towering heights.

How excited were you to get the role in ‘Black Adam’?
I was over the moon man! One, to be able to play in a world of superheroes was phenomenal. Two, to be a part of a Dwayne Johnson project is absurd and three, to come together with this cast and step into the action world and a new character I’ve never played before. It checked all the boxes.

How was getting your own super suit and getting to don the mask?
It becomes so real. It really does. The first time I put it on, the four-year-old in me, had a field day, the four-year-old me just like clawed his way out in bursts. He was like, ‘oh, my God, this is so cool’. And then you can take that, and you use it. It helped.

Did you chat to Pierce Brosnan & Dwayne Johnson about anything you could learn from them?
You know, working with them was the lesson. Watching them go through takes, watching them, analyse themselves, watching them analyse the characters, other characters. This is Dwayne’s passion project for over a decade. So, he knows these characters intimately inside and out. Their roles in the overall narrative their relationships to each other, you know, the power dynamics. He understands it all.

How was it going to San Diego Comic Con for the first time and introducing yourself as the first live action Atom Smasher?
It was spectacular, what an experience. That room lit up; Dwayne lit that room up. The energy was infectious, we actually got to watch five minutes roughly of the finished film, fully effected, fully coloured. It was magnanimous, and the room freaked out. Usually when they go to the clip, everybody leaves the stage, we laid down on the stage and watched it with the audience, because we hadn’t seen that.

Your character is very much suited for the big screen with Atom Smasher’s abilities. How was it getting to go through the process of utilising the size-manipulation & the superhuman strength from an acting point of view?
The best part about this is I actually got the superpowers. It was phenomenal. So, none of my effects are practical, almost none of it Because Albert grows. He gets big. So, a lot of it came afterwards when we did performance capture, and it was so fun.

And, I got to sit down I had a conversation with Andy Serkis. He was gracious enough to give me his time.  He’s the guy that played Gollum in ‘Lord of the Rings’, Caesar in ‘Planet of the Apes’ as well as his work on ‘Godzilla’. I’m very grateful that he was so gracious with his time and his experience and his knowledge. He just kind of imparted all this practical knowledge onto me.

What can you tell us about your characters relationship with the other members of the Justice Society?
They provide fresh, young new perspectives into what the process of being a superhero is when joining a team. They also have very different perspectives on the central ethos of the film, which is Black Adam’s ethos on morality. What is good, and what is bad. So their dynamic is ‘if we’re going to figure out this world, let’s figure it out together’.

What does Albert see in Black Adam?
In this film, you watch Atom Smasher be open-minded. He really considers what’s right and what’s wrong and I love that so much. And the rest of the Justice Society is like, ‘this is not chill’. I think Kent is a little bit more understanding or I should say Doctor Fate is a little more understanding. Overall, though, the Justice Society is like ‘We don’t kill people; That’s not what we do, we rehabilitate people, we put them in prison’. Which I think is always personally the right choice. I think you see Albert question and go, ‘why is that always the case’?

What do you hope audiences will take away from Black Adam when they see it?
I hope they’re energised. I hope they walk out of here hyped up and ready for more.

BLACK ADAM is at Irish cinemas from Oct 21st