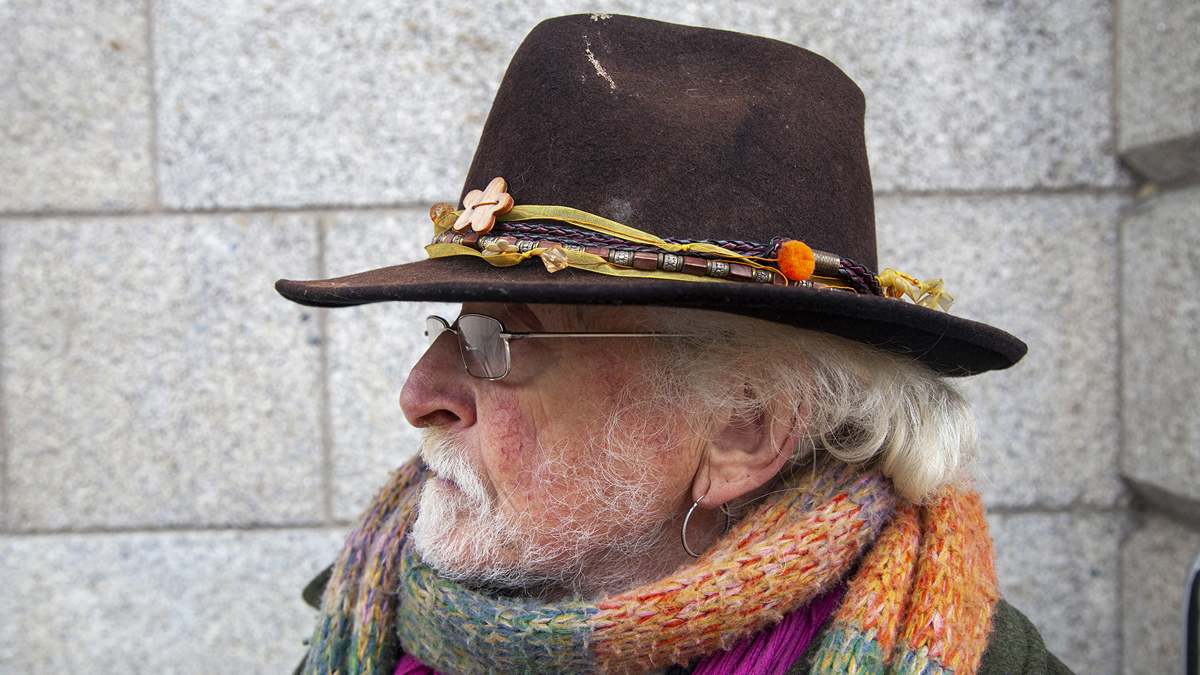 Pat Ingoldsby is one of Ireland’s most prolific poets. A maverick with great humour, Pat was a children’s television presenter and playwright before turning his back on the conventional approach to writing and working. He has written almost thirty books, all self-published and became known to many as the man on the corner, as he sold his books on the streets of Dublin. Director Seamus Murphy gives a remarkable insight into Pat’s life and the changing landscape of Dublin city centre through interviews with Pat, now aged 80, his family and friends, and well-known contributors, including Imelda May.

Why did you want to tell Pat’s story?

In 2013, I was making a short film about Dublin for The New Yorker. I finished it, but it was missing a voice from Dublin. I had never really seen Pat on television, but I’d heard a lot about him. I knew he was a poet and thought he might be worth looking into. I met him outside the Bank of Ireland, where he used to sell his books. People warned me that he is difficult to approach with a camera. That stems from wanting to be respected. People would come along, take a snap, and then run away. He hated that. I went up to him, and he asked first if I would buy a book, which I did, and we started talking. I told him what I was trying to do. He was interested, and we just took it from there. I used some of his poetry in that short film and got to know him. People either knew him, or he was such a part of the street furniture that you won’t realise he’s there until he’s not there anymore. Dublin is full of those things. One minute there’s a barber shop on a corner that’s always been there; suddenly, it’s gone. The same with pubs. Pat is another element of that. On top of all that, I’m a massive fan of his poetry, and I was bewildered by how many books he was able to publish in 27 years. He wrote 23 books in that time, all self-published, all sold on the street. The more I got to know him, the more I came to realise there was a big story to tell. He’d been to England for several years and wrote poetry about that. He comes from Malahide and talks about old Malahide in his poetry. He has been able to document living his own life. I wanted to make a film that featured his poetry in such a way that the poetry tells his life story and the story of life on the street. He has great empathy for people that have problems because he had mental health issues from an early age. He’s got profound respect and understanding for those people; he loves them, and they love him. I also wanted to make something about Dublin, like a love letter to Dublin. I left in 1983, and it’s changed a lot, in many ways for the better, and I wanted to do something a bit deeper about Dublin and what better way to do it than through the poetry of Pat’s life?

How much time did you spend with Pat, and how did you conduct the interviews?

Pat liked the short film for the New Yorker, but it was funny because when we talked about making a longer film, he said, oh, God, don’t make a film about how Dublin used to be. He didn’t want a retrospective on a lost Dublin. I told him I wanted to do something different, and he liked the idea. I teamed up with Tom Burke, a director who agreed to produce the film and work together. Initially, Pat would not be interviewed; he also said he didn’t want to appear in the film. I had ideas about how I would do it without him. In the short film, he never appears; it is just his voice, but that doesn’t work for a feature; you can’t sustain the narrative for 90 minutes with narration. After a while, Pat saw how much Tom and I were putting into it, and he enjoyed the process. It reached a point where I said I have to have your voice in the film because nobody delivers your poetry as well as you do. He’s a great performer. He agreed to record as many of his poems as possible. For this to work, I knew Pat needed to be comfortable, so I started recording in his home. I’d go to the local coffee shop, buy coffee, bring it in, and we’d go through poems. Bit by bit, he would tell a story about the poem, tell me another story about what happened to him that morning, and then tell me a story about his cat. Next, we’d be in Kerry or Mars or wherever Pat’s stories would take us. It was the guts of the film, and I wanted to introduce a camera, so I brought it in, and he didn’t react. He knew I was filming, but it was okay as long as we didn’t name the elephant in the room. I live in London, so I’d have to travel over to Ireland to do this. At a certain point, Pat said if you want to interview me, let’s do it. Tom and I got some great footage, and then the pandemic hit. I continued to talk to him on the phone and kept things going, and then when restrictions were lifted, I came back to shoot more. I also wanted to do something I have done in other films. I shoot stuff that happens on the street, see something, maybe something banal and follow it with my camera, and I thought that would work well in the film with Pat’s poetry. He is observing, and I am observing, both looking at life in Dublin. After that, there was a mammoth task of putting it together and editing, so I spent a summer doing that.

How did you edit so much material?

It was a huge task. I worked with an editor who edited most of my work, including the short film, so he was aware of my process. Some of the material I shot in 2013 for the short film ends up in this film. I caught some moments that were unique and worth using for this. The key was trying to keep the atmosphere. Pat tells a story with incredible poetic technique, it’s beautifully weighted, and he has a real sense of whether a sentence is working or not working. He’s bloody funny. Pat has self-published all his life, he is totally in control, but he had to let go and hand over control. There is a great responsibility to do him justice.

Has Pat seen it?

He has, and he loves it, thankfully. I thought parts of it might be challenging for him, but no. Honesty is important to him. He can be quite blunt. When he’s not happy with something or feels somebody is disrespecting him, he’ll call you out, but he loved the film.

As he speaks, you have many closeups of Pat’s eyes, which capture his sense of mischief. Was that why you shot him at that angle?

Yeah, it was to capture that. Pat is incredibly observant, whether it’s a caterpillar on a leaf. He’ll look at it, write about it, and invent a name for the caterpillar. He has incredibly bright, childlike eyes and a childlike mind. When he speaks, you look into his eyes because they see everything. You’re listening to what he’s saying but looking for clues for what he sees. I wanted to capture the glint in his eye, so I went for the close shots.

I heard that Imelda’s father used to read Pat’s poems to her when she was a child. I spoke with her agent, who said Imelda would love to be involved. She was living in Hampshire, and I drove up and met her to do the interview; she bought various books of Pat’s poetry. Imelda reads a lovely poem from a book she had to get online. It was very expensive because it was so rare, but it shows how much of a fan she is. She read some other poems too, but I couldn’t include them all; there isn’t time in the film. Imelda gave me a few hours, and we had a great time. It is fantastic to have her contributions in the documentary.

How did you choose the film’s wonderful title?

It took a long time to decide on the title because I had other titles in mind. Pat has a great poem called I Who Amn’t. It is so Irish, so absurd and would make a great name, but it is a hard title to sell. Pat has a book of journalistic essays called The Peculiar Sensation of Being Irish, so I took it from that. The film is about his inner world, his life in Dublin and his public life. It has a poetic ring to it.

Was there anything that surprised you about Pat?

I thought he had working-class origins because of his affinity with Dublin street life, but he was middle class; his father was a headmaster and middle class. Pat left that behind; he left a job at RTE, took to the streets to sell his books, and spent more time there than anywhere else. He was searching for harmony and found peace with the people on the street in Dublin. When one of the street sellers needed to take a break on Moore Street, Pat would take over the stall for a few minutes. When gentrification came to Dublin, and the council moved the women selling stuff from prams, he wrote about them. They had a great love for each other. That is the most surprising thing, he wasn’t born into this life, but he chose it; he felt an affinity for it.

What would you like audiences to take from the documentary?

I would love people to enjoy the film because Pat is great company. He speaks directly to you, has a lot to say, and will make you laugh. If you spend an hour and a half with Pat, you come out more informed and empathetic to the people around you. I’d love them to enjoy the film, but I’d love them also to look into his poetry and not be put off by the word poetry because it’s not like other poetry. The great gift that the film could give is that people discover his poetry, but first, enjoy his company. I had the privilege of spending a long time gathering this material to put it together in such a way that it represents Pat fairly, so that’s what I would love if people took that away with them.

THE PECULIAR SENSATION OF BEING PAT INGOLDSBY is now showing!