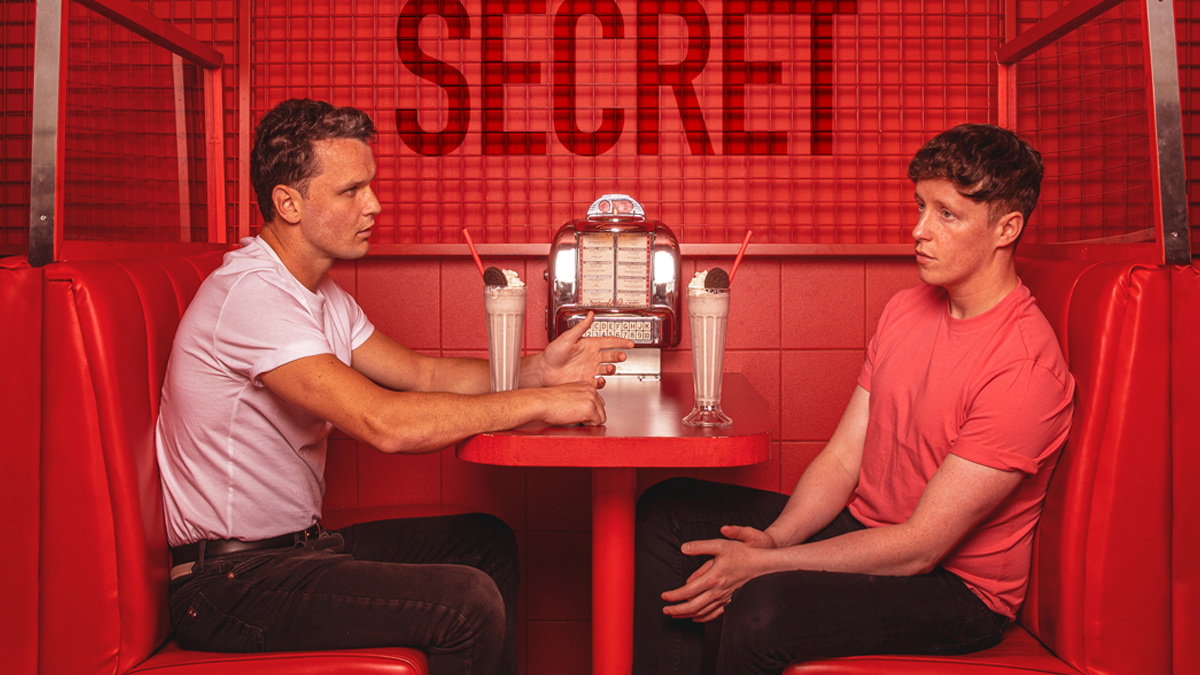 Irish Documentary How To Tell A Secret (Dir. Shaun Dunne & Anna Rodgers) uses a myriad of storytelling techniques to give a rare, at times heartbreaking and ultimately uplifting insight into people living with HIV in Ireland today. AJ O’Neill sat down with co-director Shaun Dunne to find out more.

Could you tell our readers what the film is about and what your role was in getting it made?
Shaun: The film is about HIV disclosure in Ireland today. It’s a hybrid film based on a documentary theatre project that we started in 2016 and the cinematic version is looking at a pivotal point of change in Ireland where more and more people are starting to live openly with HIV and our film captures that journey and that process. It’s a celebration of the community today. And it’s also looking at storytelling and how to tell your own story so it’s a very layered piece.

When did the film version come about?
We’ve been filming it since 2021 or thereabouts and it’s being released on World AIDS Day which is December 1st.

It’s a very powerful film. Did you find it surprising that it’s still this difficult for people to disclose their HIV status in Ireland in 2022, given the push for social change over the last decade?
I mean for me I think it’s important that in Ireland today there are not many people speaking up about HIV, who are going down the media route, etc, but within our film there are people who are self-representing and there’s people who are not ready to do that. And there’s more than one way to tell your story which is kind of what we’re trying to articulate with these retellings that are slightly more abstracted.

By that you mean the rehearsal and performance scenes in the film where actors portray real people and discuss their roles in interpreting and giving voice to these anonymised participants. An interesting, meta take on storytelling that I found very effective by the end.
Thank you. Yes. The film is about a journey that the community is on and it starts with the play where people perhaps weren’t prepared to self represent and the journey is one towards living openly and freely with HIV and I think it’s a journey that the community is on.

As an Irish queer person, I find that heartening
For me what has been interesting in terms of touring the film around and going to different countries with it is that I don’t think it’s a particularly Irish situation. I don’t think we should let ourselves take all the blame because we’re so Catholic and all that. Obviously our context is important… who we are as a country has resonance with this particular subject of course… but there are people living with HIV secretly all over the world.

For the same reasons as in Ireland?
Yes. It’s often because they’ve experienced stigma, they’ve experienced conversation that hasn’t supported them and allowed them to feel safe. So I think that the film creates a space where HIV positive and HIV negative people can sit together and we can sit in the subject for a minute and hopefully start to reprocess and move on. And any sort of inherited shame or stigma that we have as people we can start to leave behind in the past.

I think the film handles that well. You as a director and an interviewer have a very light, supportive touch. In the film at the start of the rehearsals you remind the audience as well as the actors that they are not just playing parts, they are giving voice to the voiceless who want these stories to be heard. That’s beautiful and gave the whole thing a real gravitas and poignancy I wasn’t expecting. How much of it was directly lifted from the play?
The conceit of the play was that stories move through bodies like a virus does and it was about finding that parallel. And that is how we structured how the testimonies were delivered. Anna Rogers my co-director of the piece was really interested in that conceit and it was something we dug into in terms of how the visual language of the film would work. That idea of rhythm between people was something we were working towards the whole time.

There are some lovely visuals in the film. There’s an initial shot I loved where Veda goes into a dress maker’s workspace in a glass-walled and roofed basement and the camera is waiting for them before it glides to find them in a reflection when they are seated looking at the Dice Man’s outfits for inspiration. I loved that framing.
My co-director Anna will be chuffed to hear you liked that cause she really pushed for that shot (laughs). She and the director of photography had worked together before and they have this really interesting symbiosis and work nicely together, setting up worlds and characters. It was a real pleasure when we were shooting.

One of the scenes has an anonymised storyteller with her face in shadow watching a younger woman telling her own story back to her, in her own words, from the lit stage. She’s talking through this young woman and witnessing it. It’s gorgeously handled. Really interesting. As is the story of Aaron – What can you tell people about Aaron without spoiling the film?
Aaron was one of the key stories in Rapids, the play that this was based on. Aaron is one of the first people that (HIV campaigner and advocate) Robbie Lawlor gave peer support to back in 2014/15. So when Robbie and I began to work on the theatre project the first person I sat down with was Aaron – the real person behind Aaron as that’s not his real name and we make that clear from the outset. I really related to Aaron, their instincts and how they communicate. The experience that they went on was so interesting and so profound that it kinda became the spine of the play. So the play begins with Aaron and resolves with Aaron and the cinematic structure that we’ve gone on is kinda the same, funnily enough. I represented them in the theatre each night and I’d know when they were in watching but the audience wouldn’t know that they might have been sitting next to them. Without spoiling anything, I think we bring it full circle in the film.

I think anyone who has ever felt that they aren’t allowed be their authentic selves because of the place they live will find the journey of some of your participants inspiring. No matter where they live, Ireland or elsewhere
Yeah thank you. I think it’s just about not letting other countries off the hook.

How to tell a Secret is on limited release across Ireland from December 1st, World AIDS Day