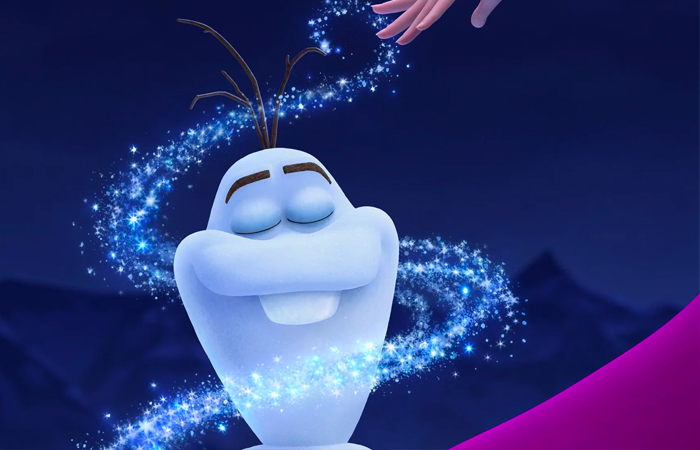 Interview – Behind the scenes on Disney’s ONCE UPON A SNOWMAN

ONCE UPON A SNOWMAN is an all-New Animated Short showing exclusively on Disney + this month. The previously untold origins of Olaf, the innocent and insightful, summer-loving snowman who melted hearts in the Academy Award®-winning 2013 Disney animated feature, ‘Frozen’, and its acclaimed 2019 sequel, are revealed in this animated short.

We caught up with film-makers Trent Correy (Director/Writer), Dan Abraham (Director/Writer), Peter Del Vecho (Creative Consultant), Becky Bresee (Head of Animation) to find out more about the behind the scenes process on the film.

Can you tell us where the idea for an Olaf short came from?
Trent Correy: My first film at Disney was the first ‘Frozen’. I started as a crowd animator during the first one and my very first character was Olaf and then I was very lucky to get to animate Olaf for the rest of the run. Right at the beginning, we saw Elsa make Olaf, but we don’t see what happens next. She creates life and she walks away. From day one I knew there was a story there. We saw his first steps and then he is off-screen for 20 minutes. At the time I had ideas about Olaf learning about who he is and what it means to be a snowman. Last year when we found out we were partnering with Disney + I thought right then that it was the perfect opportunity to have more Olaf. When the idea was pitched I was so happy to be able to tell more of Olaf’s story.

Dan, how did you come to partner with Trent on the short?
Dan Abraham: I had just finished working on Frozen 2. I storyboarded some Olaf scenes. I guess they liked what I had done with the Olaf song and his lost in the woods sequence. I was asked to partner with Trent and when we talked about it we knew we could co-direct. We were very arm-in-arm on the project and it was such a ball to work together.

Peter, what was it like to go straight from ‘Frozen 2’ to the Olaf story?
Peter Del Vecho: I’m sure Trent, Becky and Dan can attest when you make these movies you get to know these characters really well and you become a family. As hard work as the movies are to make, it is always enjoyable as well so it’s hard to step away when the film is made. I think the fact that the treadmill was still running meant that we could build on that enthusiasm and bring all that skill and momentum that we had as you finish a movie, bring that right into the short.

Would you like to work on any future projects with the character, perhaps future shorts, or maybe even a series?
Trent Correy: If I could work with Olaf for the rest of my life I would be okay with that, he is so fun and it’s about working with the team behind him too. The team behind Frozen is just fantastic.

Becky, you have been head of animation on the three Frozen projects, What is it about the Frozen world that speaks to you as an artist?
Becky: When I started on our first Frozen I was really in it for the fairytale. I’ve always loved fairy tales and Disney and the fairy tale element spoke to me. So, first, it was the princess element, but as it developed it started to become a sister story, and then it spoke to me in a very different way because I had sisters. Then I had daughters and I was invested in another way. That’s what drew me to Frozen. That is what is so wonderful. This was a reflection of the love between these two sisters. When it came to this, it was Olaf. He is such a wonderful character. It is not often we get to revisit characters in such depth and this allowed us to do that with Olaf. We got to continue with his story and that’s very special.

Everyone loves Olaf, but what do you think makes him a fan favourite?
Dan: I would say that it is his overwhelming optimism and sincerity and that just never gets old. It’s something that we all sort of aspire to and sometimes fall short, but Olaf is always there charging ahead with just this eternal optimism and sweetness that I think is a part of all of us, but maybe we wish we had more of it.

Peter: I think we can all relate to his sort of innocence. I know that that’s a slightly naive look at the world, but in doing so he can really hit on some profound, emotional things. He can zero in on things that maybe as adults we miss.

What was it like working with Josh Gad again?
Trent: He is just as funny in the movie and on his Instagram and social media as he is in person, he is hilarious. Dan and I were in the recording booth and the hardest part about that was trying not to laugh so we didn’t mess up the tape. We were having a blast. He is so generous with his time. He came in right after Frozen 2 to record this with us. He gives you so much as an actor and a comedian.  I just loved working with him. I’ll tell a quick story. Josh came to the wrap party and we watched the film. He brought his family and his little kids. His little daughter came up to me. I’m not sure how old she is, but she came up to me and she shakes my hand and she says: “I didn’t like the short. I loved the short”. She is Josh Gad’s daughter. Her timing was perfect.

Peter: I also liked how genuinely appreciative he was of all the work on the films and the short. He often talks about how he is out in front of the public but he very much recognizes all the work that is put into these films, the animation, everything behind the scenes. He sees it as a true partnership.

Some Easter Eggs are hiding in the film, can you tell us what to look out for?
Trent: There’s a lot of little fun tidbits throughout the short because we’re showing it from a different perspective. Look out for a particular dress in a shop and when you see some postcards look closely.

How did you decide what areas to expand on from the films?
Dan: We watched them over and over and over and over and over again. We looked for the little things we could weave. One of the things I always wondered is why is he obsessed with summer? He doesn’t know he would melt. How does that work? How does he know what summer is? We decided to explore why and there was a very logical explanation for that. The explanation kind of wrote itself.  I’ll speak for all of us here and say, we’re all fans of the Frozen franchise. It was fun for us to go and find those little areas of Olaf’s life and figure them all out.

ONCE UPON A SNOWMAN is now available to watch on Disney +