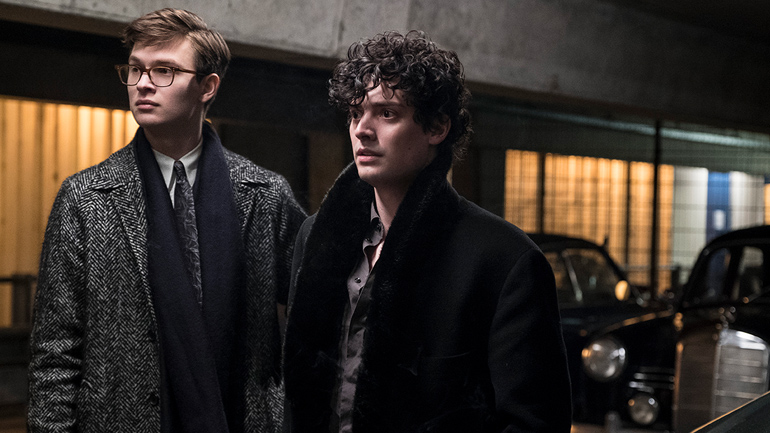 Academy Award nominated Irish director John Crowley returns this month with a beautifully wrought coming-of-age story, based on the best selling novel from Donna Tartt, which won a Pulitzer Prize for Fiction. THE GOLDFINCH tells the story of Theodore “Theo” Decker, who was 13 years old when his mother was killed in a bombing at the Metropolitan Museum of Art. The tragedy changes the course of his life, sending him on a stirring odyssey of grief and guilt, reinvention and redemption, and even love. Through it all, he holds on to one tangible piece of hope from that terrible day…a painting of a tiny bird chained to its perch. The Goldfinch.

What can you tell us about the movie?
It is about a 13-year-old boy, Theo, whose mother takes him to the Metropolitan Museum of Art. His mother leaves him for just a moment, but at that moment, there is a bombing and his mother is killed. There is an elderly man who is dying of his injuries and he tells the boy to take a painting, The Goldfinch, and to keep it safe. Theo takes it, but it leads to guilt and all sorts of pain. The younger version of my character Boris, played by Finn Wolfhard, steals it. Years later Theo and Boris meet again and the story of the painting continues on bringing Theo to different places. They are the fundamentals of the story. It is the type of story you get caught up in from the start because of the pacing. There is a lot of back and forth, the film moves from the past to the present and the present to the past. There are plenty of things to make the audience ask questions. It’s all built on relationships – good ones, loving ones, abusive ones. It’s also about people learning to deal with things. It’s a very human story.

What drew you to the part?
I always wanted to work with John Crowley, the director, and I relished the idea of working on a complex role with him. When I was first given the script, it felt like the perfect opportunity to work my socks off and get to work with a great studio and great creatives. The role itself is very complex. There is a lot going on with this character that is never said on screen. There is a lot of damage in him, but also a lot of fun. He isn’t the good guy and he isn’t the bad guy. He is dangerous because you never know if he will pull out a gun or pull out a shot of vodka instead. It is a great place to be with a character as an actor. You really have to work hard to be comfortable to play a character like him, to take risks.

What was it like working with Irish director John Crowley?
I love his work and I really love what he did with this film. When I watched I got completely lost in it, except when I was onscreen and then I switched off. I really hate watching myself, but watching what he did with everyone else is really incredible. The performances he got from the other actors are sensational. There are some key John Crowley moments in this, but some new things as well. He has brought his filmmaking to another level.

You just mentioned that you don’t like to see yourself onscreen. Why is that?
The first time I saw myself I just thought no, I don’t need to see that. I enjoy the process so much that seeing myself up there makes we want to go back to filming and to relive it all again. I’m also really OCD as an actor and I never stop trying to make myself better so when I see myself, I just see things that I want to change but can’t. I do a lot of prep work and then it is about playing with the work on set and that is where I really enjoy the process and have fun. I don’t need to see the result. I’ve already gone through the part I enjoy.

Did you work with Finn Wolfhard so that young and older Boris would be in sync and believable as the same character just at a different age?
The first time I worked with Finn was after I worked with a dialect coach and John Crowley, on the character’s accent. Once we figured out what we wanted it to be we recorded it and gave it to Finn so that  he could work on it to make sure we were plausible as the same character. Both of us instinctively played Boris the same way just with a slight difference. Tim played him with more naivety to reflect his youth, I added a riskier edge which suits older Boris and what he has been through.

The film is based on a book by Donna Tartt. Did you read it or do you prefer to work from the script?
I read the script first and then the book. I took things from the book that we weren’t using in the film to add subtext to my character and to get deeper into the role and then I left the book alone. At that point, it becomes playing with the character that I had built with John. He guided me and pushed me and then I pushed back so we could get the best possible version of this character that we could get.

You have starred in a number of period pieces. Is that a coincidence or is it a genre you are particularly drawn to?
It is a bit of a coincidence. I do love the older pieces, there is so much weight to them and it’s a challenge. I base my decisions on the character and the people I’ll get to work with. I always want to push myself further. I always strive to do that no matter what genre I work in.

The Goldfinch is your second time to work with an Irish director. You worked with Ciarán Foy on Citadel.
He was great to work with. I have a lot of love for the Irish. There are so many talented people. I am Welsh and I think we have a lot in common with the Irish.

Your role in Citadel was so intense, were you completely exhausted by the end of filming?
I was playing such a messed-up character, I really do get drawn to these people. I wanted to really understand what it was like to be that character. He has agoraphobia and insomnia so every day after filming I would go to the gym for at least two hours and run. I would just keep going, I would get very little sleep and I would get picked up at 4 in the morning to start working again. It wasn’t exactly method acting, but I wanted to feel the weight of that exhaustion.

You come from a coal mining background, were your family surprised when you decided you wanted  to act?
So surprised. My dad, my uncles, my grandfathers all worked in the mines. My mum and all my aunties worked in a factory. That is where I was heading because the Valleys have been left behind. They have been neglected and people from there have very little choice about what to do with their lives. My family really supported me when I decided to do this. I met someone who was in a youth theatre and that changed my life. There is no connection to acting where I am from, no way in for someone like me. It’s a one in a million chance and thanks to the help and support from my family we made it work.

You have done a lot of theatre work. Do you have a preference for stage or screen?
I love it all. I like to change it up when I can but I go where the roles are, be they on stage, tv, or film.  I don’t want to be typecast. I want to be the type of actor that people are interested in and wonder what I will do next. It makes me strive to be better. I want to do better.

You have also worked in musical theatre. Is there any artist whose life you would like to portray in film?
Oh, there are so many. Jobs like that don’t come up very often, but I would jump at the chance to be in one. I don’t have time for much singing these days, I just do it privately, but I would love to be able to bring that out to the forefront again.

THE GOLDFINCH is at Irish cinemas from Sept 27th