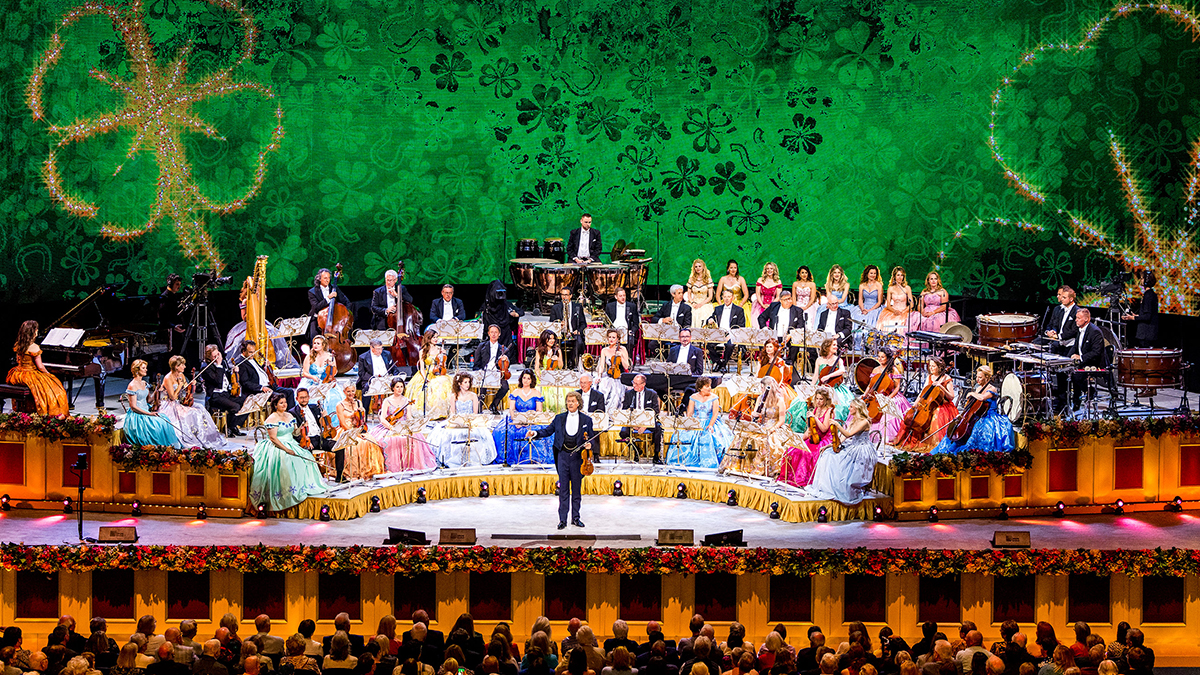 Kick off 2023 in style with André Rieu in Dublin – André’s celebratory concert is exclusive to cinemas across Ireland and is the only way to start the new year with your family and friends for one weekend only on 7 th and 8 th January!

It has been over 20 years since André first recorded a concert in Dublin, so André Rieu in Dublin is an occasion not to be missed!
“New Years is always such a special time, looking forward to the future, coming together with friends and family and toasting the year ahead! This will be a wonderful concert for everyone to kick off 2023 with a waltz or two! My fabulous Johann Strauss orchestra and I look forward to seeing you in the cinemas and sharing this special time with one another” reflects André.
André has been performing around the world with his Johann Strauss Orchestra for 35 years and has since become one of the most successful violinists and conductors in the world. He performs for a live audience of over half a million each year, spreading his love and passion for music to fans across the globe and now bringing it to the big screen for even more to enjoy.
André’s cinema events are adored by fans, Happy Days Are Here Again was André’s last cinema show which hit the No.1 in theIrish Box Office in August.
For full list of cinema screenings visit: WWW.ANDREINCINEMAS.COM

Is Christmas Time your favourite time of year?
I’m very fond of Christmas; throughout the whole year I’m on the road with my Big Family (all my orchestra members, who are very dear to me). Christmas is the time of the year everybody wants to spend with their own Small Family: in this particular case, it’s my wife Marjorie, our sons Marc and Pierre with their wives and, last but not least, our five grandchildren. While Maastricht is covered with snow, grandpa André is cooking for all of them, the rest enjoys each other’s company.

What do  you enjoy the most at this time of Year?
Being together with my loved ones, unpacking Christmas gifts and relaxing. But first of all, I have a couple of Christmas concerts in Maastricht to look forward to: the beginning of a new home town tradition, I hope!

When bringing in the New Year any traditions that you and your family do ?
We’re enjoying a dinner together, taking a nice stroll in a wintery Maastricht or watch a nice movie together (like Home Alone or Mary Poppins). When the boys were still toddlers, we used to watch the sketch “Dinner for One”, which Marc and Pierre imitated the day after – that was so cute and even more hilarious than the original one on TV!

What’s different about Irish Audiences ?
They’re the most humorous audience in the whole world! Never met such wonderful sense of humor. I remember telling the tragic story of Madame Butterfly, who fell in love with an American sea captain and was very unhappy when he didn’t show up anymore. But the Irish audience couldn’t stop laughing out loud about the story I told them, and at the end I had to laugh, too. They simply didn’t believe me nor my tragic story telling.

Any New Year wishes for 2023?
To stay healthy, to discover new places for concerts and to make as many people as possible happy with the music my orchestra and I will play