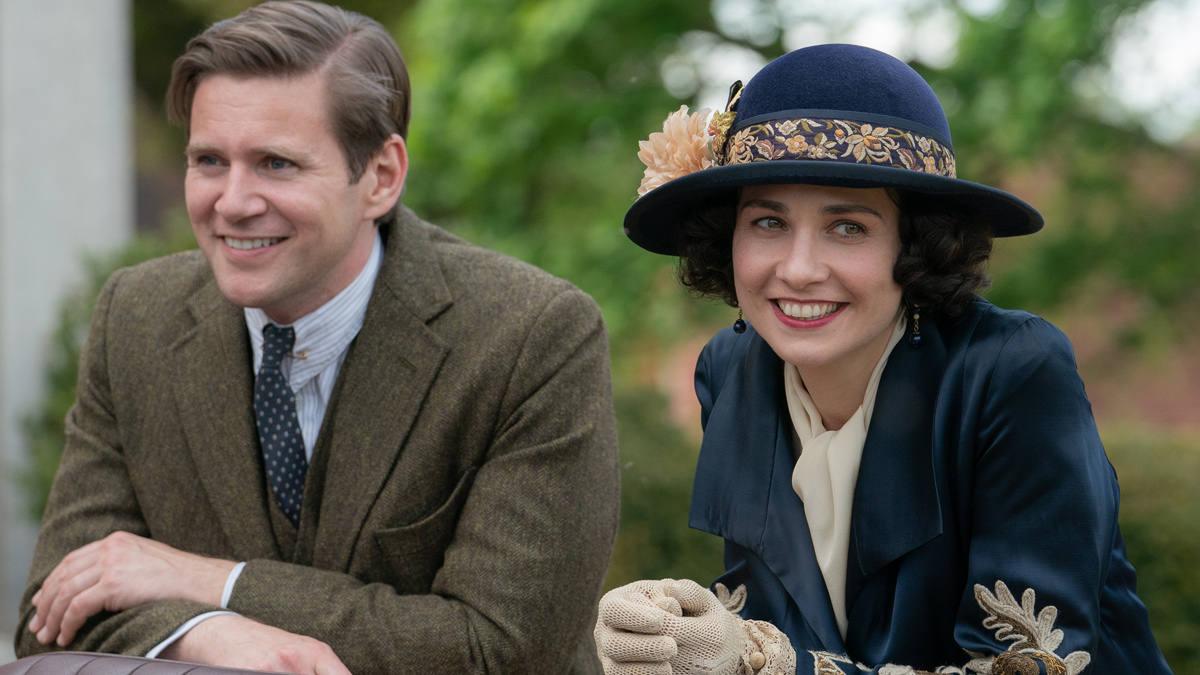 The much-anticipated cinematic return of the global phenomenon reunites the beloved cast as they go on a grand journey to the South of France to uncover the mystery of the Dowager Countess’ newly inherited villa. We caught up with actor Alan Leech who plays Tom Branson in the film to talk about moving Downton Abbey to the French Riviera.

The big question is, did you just sign on for Downton 2 because you knew it was filming in the French Riviera?
Ha, no! If Julian [Fellowes] came to me and said we’re doing another movie, it wouldn’t matter where it was if I got to be back with these guys. It was great fun. We genuinely have come together as a family because of the success of this show. Being able to experience what we have over the years has just made it such a joy. Julian could write, Branson opens one door, and I would be there.

Branson has had some big storylines, but this time he gets to have a big, shiny Downton moment with his wedding to Lucy. What was it like to film that after the many hard times that Branson has gone through?
I loved it. You play a character for this long, you genuinely get invested in their story and journey. I was so happy to read the script, open it, and see that Tom got happiness; it’s something Tom has been missing for a long time. He’s valiantly tried to find love for other people, but he never really found it for himself, so I was delighted that he had that moment. To have a special occasion like that, when you get all of the cast together, is always great fun for us; it is probably less fun for the crew; I think it’s like herding cats mainly because we’re just trying to catch up and see how everyone’s doing. It was special filming this because it was my 40th birthday, the day that we shot the wedding scene.

Does that mean there was real champagne in the glasses?
No, in fairness, we’ve never done that, only because of the amount of takes we do. I think you’d find us rolling around on the floor, but I also had to film a driving scene on the same day. Every time they put me into one of those cars, I’m amazed that no one at that point in history decided we should really decide where the pedals are going to go, each one is different, and they’re really complicated things. The director said, ” Can you look like you’re enjoying yourself”, but I was trying not to kill the other actors beside me. The original car I drove when I was the chauffeur was a 1910 Renault, and there was only one in the world. It had a leather clutch, which I managed to drop out of the car on my very last day of filming the first season. I didn’t change gear properly, and the thing couldn’t hack it. I literally coasted to a stop, and they went, that’s a wrap, and I was like, I’m getting out of here.

Is it true that Branson was only ever meant to be in three episodes?
Yeah, I was hired just to be the chauffeur in the first season. Branson was also not supposed to be Irish. When I first got the cover letter for Downton Abbey, he was John Branson, a Yorkshire chauffeur. I went into the audition, having practised my Yorkshire accent. Julian Fellowes, who I had worked with before on a movie called From Time to Time that also happened to have Maggie Smith, Hugh Bonneville, and myself, said, I have an idea, and I genuinely think it was in that moment that he thought let’s play him Irish. When I got the part, I said I wanted to play him as a Yorkshireman because I wanted to branch out. It was only when Julian got on the phone and said, stop fighting this, I think I’ve got a great idea here. I played him Irish in three episodes, but it wasn’t until the show came out in America that I got the call to say we’re going to ask you back.

The show was a massive success, and then the first film was a huge box office hit. Did you worry if a second film could hit those levels, or did you have complete faith in Julian to hit the mark again?
At the end of the show, when they said we were going to make a movie, we felt the pressure of that. How do we take this from the small screen to the silver screen? How do we make this big enough to be cinematic? I think we did a great job, and it really did do the transition very well, but then we’ve got another movie, and we have to up our game again. I feel that this new one is the best Downton has ever looked. It’s so beautiful. It really is cinematic. Andrew Dunn, our Director of Photography, has done an amazing job.

Branson is from Bray. As a Bray reporter, I have to ask, why is that and not somewhere better known outside of Ireland?
That is a great question. Julian has a connection to Ireland; his brother lives in Kerry. He wanted Tom to be from Bray because he wanted him to be closer to some of the larger estates in Wicklow. Branson talks about how he used to drive for a family in Ireland.

There could be a spin-off: Branson’s connections to somewhere like Kilruddery House?
A spin-off, or we go back in time, and Niall Horan could play young Branson; everyone keeps saying we look alike.

Does the novelty of working with the great Dame Maggie Smith ever wear off?
To be honest, no, it can’t because she’s such a joy to be around and watch work and then listen to her career stories. She’s absolutely brilliant. I hope the novelty never wears off and that we get to work together again somewhere down the line.

Downton has comedy, is sometimes a little silly, and has big emotional moments. How important is the mix to the show’s success?
I think it’s one of the things that people love about Downton because you do have these moments, as you say, of great joy, great happiness, and comedy, and then it’s intertwined with incredible sadness. You never really know what’s coming around the corner. I think that’s why people keep coming back and keep tuning in because they want to see what happened to these characters. And then when something tragic does happen, we’re the ones who end up getting it from the fans whenever you meet them. They’re like, I can’t believe you let that happen. After the premiere in Dublin, my mother turned to me and said, I’m very upset with you about something that happened. I didn’t write it!

The cast is extensive, and there are many characters, yet everyone gets their moment to shine. Is that down to Julian’s writing or the actors really knowing their characters and being able to pop and shine?
Julian has juggled these characters for six seasons and another movie before this. He has a great way of writing. He writes a very British story in a very American style, so we get these smaller scenes. The great thing about his writing is that you could take the names of the characters out of the script, and you’ll know who’s talking because they all have very distinctive voices. And I think that helps us as actors to be able to come up and, as you say, pop up, do your bit, and then recede. That’s the great thing about being part of such a fantastic ensemble. We’re all equal. And the great thing about Julian’s writing is he gives you as much about the kitchen maid as he does about the lord of the manor. And I think that’s one of his great gifts.

Do you think we will see these characters again?
That’ll come down to the fans, but I think you could ask any member of this cast, and they’d happily come back because it is such a special thing that it is so loved. It’s unique to be part of something like that in anyone’s career. So, I think as long as the fans want it, I’m pretty sure you’ll see all of us come back.

What do you want audiences to take from the film?
I want people to enjoy these characters that I’m sure they’ve known and loved for 12 years, continue on this journey. It’s wonderful escapism, I think as well, at a time when people really need it. A lot of people who have seen it have said it was just wonderful to just disappear into this wonderful world into the 1920s and just get lost. So, I really hope that they can escape and enjoy it.