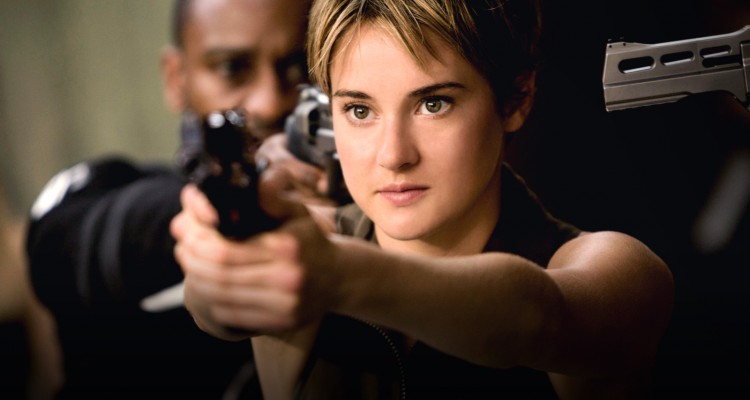 INSURGENT (USA/12A/119mins)
Directed by Robert Schwentke. Starring Shailene Woodley, Kate Winslet, Octavia Spencer, Naomi Watts, Theo James, Ansel Engort.
THE PLOT: Having evaded Jeanine (Kate Winslet) and her hostile takeover of the factions, Tris (Shailene Woodley) and Four (Theo James) are on the run, and take shelter in Amity; the most gentle and forgiving of the factions that make up their world. When Jeanine’s forces arrive at their door, however, a member of their shaky alliance turns on them, and Tris finds herself teaming with fellow outcasts to bring the system down from the inside.

THE VERDICT: DIVERGENT, the first film in the series on films based on Veronica Roth’s books, was a fun and light fantasy adventure. However, with the departure of director Neil Burger, and the story getting more and more involved, it seems a lot of the fun has been removed from INSURGENT.

Shailene Woodley carries on her strong work from the first film, but seems a little less comfortable in the role of Tris than she was the first time out; perhaps this is because there seems to be a desperate attempt to make the character sexy, which doesn’t sit well with the rest of the film. The rest of the cast pick up where they left off; Theo James as ‘scary boyfriend’ Four, Miles Teller as the fickle Peter and Kate Winslet as the cold and overbearing Jeanine. Naomi Watts joins the fun as Evelyn, the leader of the Factionless, and is joined by Octavia Spencer and Daniel Dae Kim.

Brian Duffield, Akiva Goldsman and Mark Bomback’s screenplay takes a very different path than the book, although both end up at roughly the same place in the end. This is where the trouble arises with the film; in trying to wrap up the loose ends from the first film, and set up the final instalment in the trilogy, INSURGENT is stricken with ‘middle film’ syndrome. Instead of telling its own story, INSURGENT gets too caught up in the setting up the finale, meaning the film drags its heels and, when the epic set piece finally does come, it’s too little too late.

Robert Schwentke does what he can with INSURGENT, but never manages to drag the pacing out of the doldrums. There are plenty of stylish moments in the film, but making the film a 3D creation seems to have been to benefit the final set piece, which looks good, but this doesn’t justify the choice, when the 3D is forgotten about during the rest of the film. As well as this, with so much focus given to the simulations that Tris finds herself in, INSURGENT begins to feel more like a video game than a movie.

In all, INSURGENT is a film made for the fans, and designed to wrap up DIVERGENT before moving on to ALLIEGANT, the final film(s) in the franchise. There are worse ways to spend 2 hours – the film is stylish and thrilling at times – but INSURGENT is definitely one for the fans.

Review by Brogen Hayes
2
One for fans