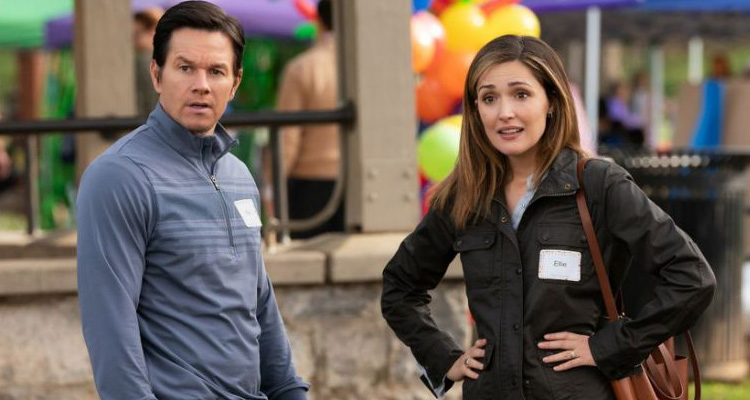 The Plot: Pete (Mark Wahlberg) and Ellie (Rose Byrne) have been doing just fine in their marriage. Something is missing though. The patter of little feet around the house and the sound of a child’s voice. When Pete catches Ellie looking at an adoption agency website, he gradually comes onboard with the idea. After attending the training period at the agency, they warm to sparky teen Lizzy (Isabela Moner) and discover that she comes with a bonus – her two younger siblings Juan (Gustav Quiroz) and Lita (Julianna Gamiz). They take the trio into their house as foster parents in the eventuality of adopting them, as their birth mother is a drug addict in prison. As expected, chaos ensues around the house, not helped by Lizzy’s rebelliousness and loyalty to her birth mother. Slowly but surely though, they all bond…

The Verdict: Cosy American comedy Instant Family comes with an ‘inspired by a true story’ tag. That’s about it though, as you can imagine the real life story being far more credible and less pedestrian than this lacklustre effort. You only have to look at the predictable casting of Mark Wahlberg to suss out what it’s going to be like in advance. Even with proven comedy credentials in the likes of Ted, Wahlberg is better at playing the hardman than the cuddly father. He reunites with his Daddy’s Home director Sean Anders for this one. What we have here is a chaotic would-be comedy about two put-upon adults, two cute kids and a feisty teen who is smarter than all of them combined (of course). All under one roof, as they try to adjust to life together despite their many differences.

Lizzy takes every opportunity to remind Pete and Ellie that they’re not real parents. Juan is accident prone, while Lita will only eat crisps and throws a tantrum if she doesn’t get them. It sounds like the ideal recipe for a sitcom, which is what this film really should be. Instead, it’s 2 hours of shouting, running, support groups and parental exasperation along with interludes from oddball characters (hello Joan Cusack). Some of it is quite charming and funny, like the way this instant family gradually bonds. In one scene, Pete allows Lizzy to take out her anger with a sledgehammer. Smart move. What works less well is the fact that this family-friendly comedy isn’t so family-friendly. It’s surprisingly crude at times and even ventures into darker territory – an uncomfortable plot development which comes across as misjudged and squirm-inducing. Was that really necessary?

Wahlberg and Byrne are merely going through the motions, repeating previous roles and don’t have any new material to add here. It doesn’t matter that much though, as, they’re both acted off the screen by the superb Moner. After impressing greatly as the tough-as-nails kidnapped girl in Sicario 2: Soldado, she easily shrugs away the standard-issue rebellious teen that’s on the page and gives Lizzy some real personality, spark and depth of emotion. It’s just a shame that the rest of the film isn’t up to her standard. While Instant Family is feel-good fare, it’s entirely predictable fare too. There are good laughs to be had here, but unfortunately they’re few and far between. A lot of it comes across as mawkish sentimentality, the kind that a film about foster parents and their new-found children should ideally seek to avoid. Real life isn’t like this, is it? It’s such a movie-movie family. You know what you’re getting with Instant Family, which is passable but… instantly forgettable.