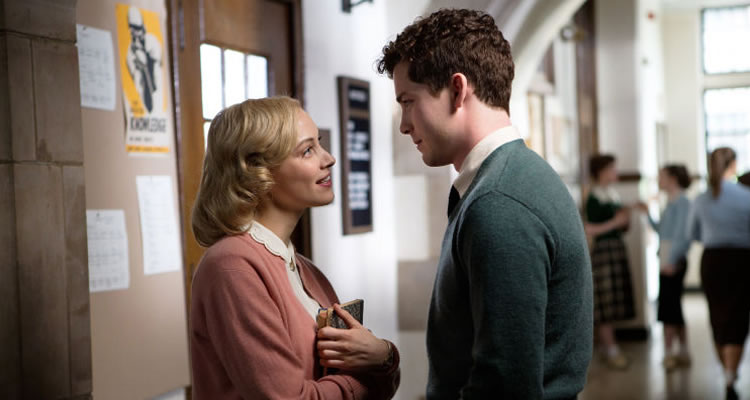 INDIGNATION (USA | China/TBC/110mins)
Directed by James Schamus. Starring Logan Lerman, Sarah Gadon, Tracy Letts, Linda Emond, Ben Rosenfield
THE PLOT: Marcus (Logan Lerman), a working class Jewish boy from New Jersey is awarded a scholarship at Winesburg college in Ohio in the 1950s. Beliving this to be a place of study, learning and free expression, Marcus throws himself into this new life, but it is not long before he has caught the Dean’s (Tracy Letts) ateention for not socialising, is questioning authority candidly and falling in love with the beautiful but troubled Olivia (Sarah Gadon).
THE VERDICT: Based on Philip Roth’s novel of the same name, ‘Indignation’ is the author’s 29th novel, and the second to come to the big screen this month after American Pastoral. The book is semi-autobiographical and based on Roth’s time in college, and is obviously a personal project for long time writer/producer but first time director James Schamus.
Logan Lerman leads the cast as Marcus, and this is the most grown up and assured role that the actor has played to date. Lerman handles arguing about Bertrand Russell’s essay “Why I Am Not a Christian”, religion and sex easily, and it is clear that this is a young actor who has developed range and a taste for interesting projects as he has got older. Sarah Gadon fares less well as the charming, beautiful but unruly Olivia Hutton; the subject of Marcus’ infatuation and cause of confusion for him. Gadon never truly gets the chance to explore her former alcoholic, suicidal character on screen, instead all of this is hidden underneath a veneer of composure that never seems to slip, other than the times when she is unexpectedly sexually open and promiscuous. Tracy Letts – perhaps better known for his work as screenwriter on ‘August: Osage County’ and ‘Killer Joe’ – mades Dean Caldwell imposing and strong, and a natural foil for Marcus’ more hopeful and revolutionary ways of thinking.
As screenwriter, James Schamus has stayed true to the feel of the novel, and allows the film to drift until the final 15 minutes of its 110 minute running time, when the threads of the story begin to come together. There are times when the film feels as though it is drifting from one scene to the next, rather than telling a cohesive story, but the performances of the actors go some way into bringing it all together on screen. As director, Schamus coaxes wonderful performances from his cast, but never gives the pacing a sense of urgency, meaning that the film never truly grabs or engages audiences until it is almost too late. That said, ‘Indignation’ has some wonderful scenes – such as Letts and Lerman’s first meeting – but there are not enough of these throughout the film to bring it together in the end.
In all,’ Indignation’ is a film populated with strong performances from Logan Lerman, Tarcy Letts and – to a lesser degree, since she is never really given a chance – Sarah Gadon. The story of the film feels loose and drifting, and although it all comes together in the end, this comes as too little too late.
RATING: 3/5
Review by Brogen Hayes