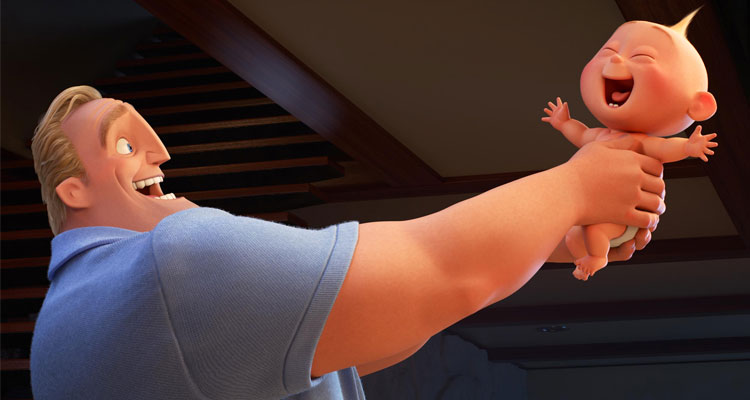 The Plot: The super-powered Parr family of Bob (Craig T. Nelson), Helen (Holly Hunter), Violet (Sarah Vowell) and Dash (Huck Milner) find that saving their city and possibly the world isn’t all that it’s cracked up to be. Insurance agents tell them that it would have been cheaper to not intervene and not cause citywide destruction while taking down super-villains. Supers like the Parrs now find themselves outlaws. However, tech company brother and sister team of Evelyn (Catherine Keener) and Winston (Bob Odenkirk) approach the family with a new angle to revitalise the image of supers. Helen / Elastigirl is the key to this and she’s tasked with tackling a new villain called the Screenslaver. Bob has to swallow his masculinity and is left at home with the kids, but discovers baby Jack-Jack’s wild newfound superpowers…

The Verdict: 2004’s The Incredibles was what this reviewer regards as mid-range Pixar. Action-packed and fun, but not exactly a classic in the well-refined gold-standard mould of Toy Story 2 or Wall-E. Having developed their projects inhouse, director Brad Bird brought this idea to them, inspired by his love of spy and superhero movies. The Incredibles was 14 years ago and quite some time has passed, in which superhero movies are all the rage. Why go back, said Bird? Only if he could find an idea that worked or was better than the original. He certainly succeeded on that point with Incredibles 2, which is undoubtedly a superior sequel in every respect.

Preceded by cutesy if somewhat oddball short Bao, Incredibles 2 gets straight into the action with a dazzling opening sequence which picks up where the previous film left off. Something is immediately apparent. The film not only looks better but sounds better – an upgrade of 14 years in CGI animation. The equivalent of going from an old, indestructible Nokia 3310 to a latest generation smartphone. That’s another reason for Bird to return to this story – some of the things he wanted to do visually the first time around weren’t quite achievable with the technology of the time. As Edna Mode might say, the film looks simply fabulous, darling.

The technical side isn’t the only department to receive an upgrade. Bird’s script is sharper and more in tune with his superhero characters. He fleshes the Parrs out in much greater detail, giving them a wealth of witty dialogue and situations that test them. Bob has to take a back-seat for a change, as Helen gets to do her superhero thing. In a year in which women’s voices in the film industry have rightfully grown more prominent, it’s a welcome reversal of familial and gender stereotypes. Then there’s Jack-Jack. There can’t be enough of him after seeing this film. A stand-out sequence, which was there from the beginning and is pure Pixar, sees Jack-Jack taking on a furry critter alone. Violet and Dash also get their moments to shine, so that this super family mostly work in tandem (along with some customary dinner table bickering, of course).

Bird’s direction and his editing with Stephen Schaffer is snazzier, belying the fact that the film is 2 hours long – the longest CGI animated feature to date. Whereas the original dragged in spots, the sequel zipped past like Dash, leaving this reviewer breathless and gasping for more. Michael Giacchino’s rousing score is even more Bondian than before, building up to a climactic sequence that must surely have been inspired by Thunderball. Incredibles 2 is that rare thing – a super sequel that is bolder, faster and more imaginative than its predecessor. Critics and fans of Pixar have bemoaned the fact that the animation giant has churned out bland, unnecessary sequels like Cars 2 and 3. That’s not evident with Incredibles 2. The secret ingredient here is Brad Bird. True to his name, he makes his film soar.