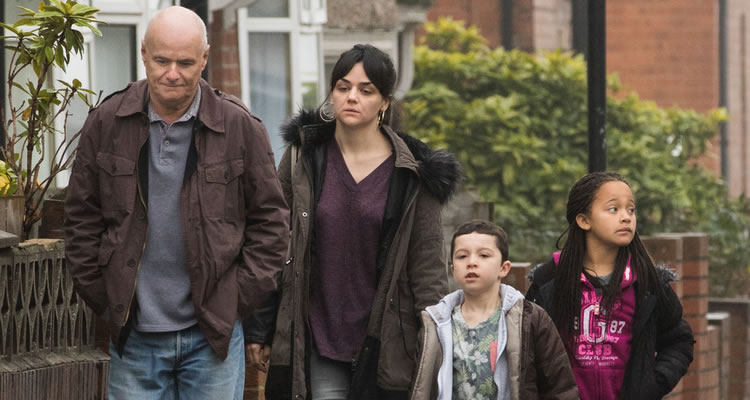 I, DANIEL BLAKE (UK | France/TBC/98mins)
Directed by Ken Loach. Starring Dave Johns, Hayley Squiares, Dylan McKiernan, Briana Shann, Kate Rutter.
THE PLOT: Daniel Blake (Dave Johns) has worked all his life as a carpenter. After a heart attack puts him out of work he tries to claim benefits until his doctor deems him fit to go back to work. Excluded from claiming benefits since a “health care professional” considers him fit to work, Daniel finds his efforts to appeal frustrated. When he meets Katie (Hayley Squires), a young woman with two children who is also being denied benefits, the two strike up a sweet friendship borne out of adversity.
THE VERDICT: Ken Loach returns to the Cannes Film Festival with a a powerful film about those who find themselves ignored by the institutions put in place to help them. The characters at the heart of the film are engaging and warm, but this is a film filled with tragedy and heartbreak.
Dave Johns and Hayley Squires lead the cast here as ordinary people who don’t want to be in the situation they are in, but find it nigh on impossible to get out. Johns makes Dan a gentle man whose constant source of frustration throughout the film is the feeling that he is being treated as a statistic rather than a person. It is this that leads to all of the character’s justified anger, as well as a fierce desire to protect those he sees as victims of injustice. Haley Squires plays Katie – a woman from London who takes a house in Newcastle for the sake of putting a roof over her kids’ heads – and makes the character strong in her convictions, but overwhelmed by the system that seems determined to ignore her. Both actors’ performances feel honest and raw, and the chemistry between them is sweet and warm. The rest of the cast features Dylan McKiernan and Briana Shann as Katie’s young children, Kate Rutter, Sharon Percy and Kema Sikazwe.
Screenwriter Paul Laverty shines a light on the benefits system in the UK, and those who want nothing more than to be self sufficient, but their cries for help are ignored by the State. The dialogue feels warm and comfortable – although the Newcastle accent was subtitled in both French and English for the Cannes audience – and the story plays out in a simple but engaging manner. Tragedies are relatively small in ‘I, Daniel Blake’, as characters find their dignity eroded by a system that ignores them, but this is why these tragedies are so heartbreaking.
Director Ken Loach – whose statement that he has made his last film seems to have been premature – makes ‘I, Daniel Blake’ feel like a look into the lives of ordinary people. The highs of the film are emotion based, as are the lows, and it is this that makes the film so powerful. A feeling of hope in the face of helplessness permeates the film, making the audience root for these likeable characters that could well be any one of us if our luck were to change. There are a couple of issues with pacing here and there however, and some jumps in the timeline toward the end of the film are a little jarring.
In all, ‘I, Daniel Blake’ is a powerful and damning look at what happens to people when the system ignores them. Dave Johns and Hayley Squires are phenomenal in their roles, making ‘I, Daniel Blake’ an emotional gut punch that is heartbreaking in its sincerity.
RATING: 4/5
Review by Brogen Hayes