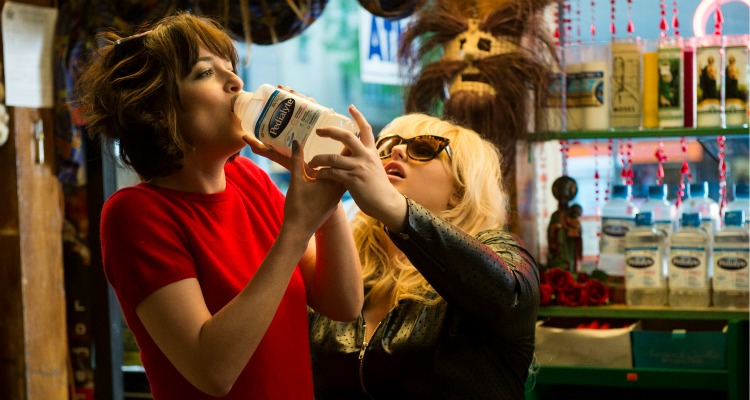 How to be Single

HOW TO BE SINGLE (USA/15A/110mins)
Directed by Christian Ditter. Starring Dakota Johnson, Alison Brie, Leslie Mann, Rebel Wilson, Anders Holm.
THE PLOT: Newly single after several years in a relationship and believing she wants to discover who she is while alone, Alice (Dakota Johnson) starts her new life in New York City. Although she quickly befriends Robin (Rebel Wilson), she quickly learns that the single life isn’t quite all that it is made out to be. Meanwhile, Lucy (Alison Brie) is so desperate to get married that she has created an algorithm to find the perfect guy, Tom (Anders Holm) goes from one one night stand to the next, and Meg (Leslie Mann) is trying convince herself that she is fine on her own and definitely doesn’t want kids.
THE VERDICT: Dakota Johnson plays Alice as the wide eyed girl new to the city – Taylor Swift’s “Welcome to New York” playing over her arrival into the city and everything – who sets out to have new life experiences. There is not a lot to Alice other than indecision and an annoying innocence, so Johnson manages the role fine since it is below the skill she displayed in ‘A Bigger Splash’. Rebel Wilson reprises her role as the loud mouthed slutty friend, Anders Holm plays a sleazy bartender, and Alison Brie plays the manic pixie girl obsessed with getting her white wedding, although not a hint is given that marriage is the start of something, rather than the end. Elsewhere, Leslie Mann does well enough with a role as a workaholic doctor who has convinced herself – rather badly – that a baby is not in her plan, Damon Wayans Jr plays David, a man unable to let go of the past, and Jake Lacy tries his best to buck the trend of stereotypes by playing a young man who has always dreamed of being a stay at home dad.
‘How to be Single’ takes its name from Liz Tuccillo’s novel, but other than a character named Alice, the film seems to have little to do with the story of the book. Instead of a character who travels the world looking for herself and finding a way to be happy on her own – cliché, but it could have been better than the finished result of the film –screenwriters Abby Kohn, Marc Silverstein and Dana Fox have reduced the story into stereotypes; the slutty friend, the ingénue, the wedding crazy one, the commitment-phobe and the workaholic. The dialogue sounds as though it is taken straight from a self-help book or – even as it notably takes the mick from ‘Sex and the City’ – a column written by Carrie Bradshaw 15 years ago. In trying to create an aspirational message in the film, the story dissolves from women not needing to be in a relationship to be fulfilled into one about women somehow feeling the need to apologise for not being in a relationship by the time they leave college. Thankfully, we are all one read of a book by Cheryl Strayed and a magnet on a pulley to help us open our dress zippers away from being self-actualised The story jumps throughout the space of a year, with motivations disappearing in the wind as scenes need to be played out. Arguments happen seemingly because the script says they should, and slut-shaming, relationship shaming and women shaming abound.
Director Christian Ditter, who last brought us the clichéd and half-baked ‘Love, Rosie’, brings us another clichéd and half-baked film in How to be Single. The story jumps through time seemingly at will, characters disappear and reappear at their own discretion and although the film could have been seen as Ditter’s apology for the clichéd and insulting ‘Love, Rosie’, it somehow ends up more insulting to women who want careers, don’t want children or are perfectly fine without a man, thank you very much.
In all, ‘How to be Single’ is a film that, on the surface, seems to celebrate women and the choice to be single, but instead succeeds in women being shamed for their choices, slut-shamed and reduced to stereotypes, while men are allowed to be as promiscuous as they like without fear or repercussion. The laughs are few on the ground and, while New York City looks fantastic and there are some good songs on the soundtrack, by the end, who really cares?
RATING: 1/5
Review by Brogen Hayes