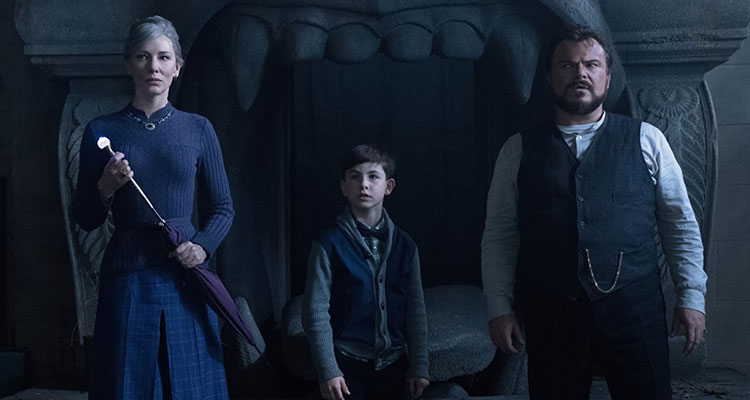 The House With A Clock In Its Walls

The Plot: Michigan, 1955. When his parents are killed in an accident, 10-year-old Lewis (Owen Vaccaro) comes under the wing of his uncle Jonathan (Jack Black). The off-kilter Jonathan has a rather unusual magic-laden house, which has a ticking clock in its walls at night. He is actually a warlock or ‘boy witch’ and is keen to discover its secrets left behind by the previous, now dead warlock Isaac (Kyle MacLachlan). Jonathan enlists the help of witch neighbour Mrs. Zimmerman (Cate Blanchett) and an enlightened Lewis to stop the clock and the potential end of the world…

The Verdict: Based on the book by John Bellairs, The House With A Clock In Its Walls is an unusual step forward for director Eli Roth. Best known for his gorefest Hostel, he doesn’t come across as the obvious choice for a family-friendly adventure like this one. Has he gone soft in his middle age? No, it seems. He always had a hankering to do an 80s-style Amblin family film. He’s got his wish with this film, since it’s produced by Amblin. True to his style of filmmaking though, it’s a ghoulish treat – but all within a PG safe zone of course. The ickiest, funniest moment comes courtesy of vomiting animated pumpkins which then explode.

Its nearest contemporary is Goosebumps, which revelled in a childhood love of movie monsters and creatures. There are plenty of them here, from a sofa with personality to a giant snake to a hedge griffin and talking cadavers. It’s a colourful film full of gorgeously-realised production design that extends into the inner walls of the house, as Lewis digs deeper and taps into his own sense of magic. The film slides easily from slightly harsh reality into fantasy with ease, led by Roth’s own child-like sense of wonder about this world. That talk that Roth had with Steven Spielberg certainly stuck, as the direction is playfully spooky and crowd-pleasing.

Black and Blanchett throw themselves into their witchy roles with gusto, heightening their performances just enough to make them acceptably and endearingly hammy. Actors sometimes come across as talking down to their child co-stars, but Vaccaro is more than a match for them and there’s a mutual respect and rapport between the trio. More of MacLachlan’s doomed warlock backstory would have been welcome. There could also be less of a bizarre gag late in the film involving Jonathan. It’s a trick that is too similar and too soon after Deadpool 2. The CGI looks ropey in that sequence anyway. If it didn’t work in Deadpool 2, then it’s not working here either.

Still, there are many treats to be had here. The House With A Clock In Its Walls is a suitably ghoulish pre-Hallowe’en treat that should delight children and parents alike, especially boys that grew up on the magic of movie monsters like this one.