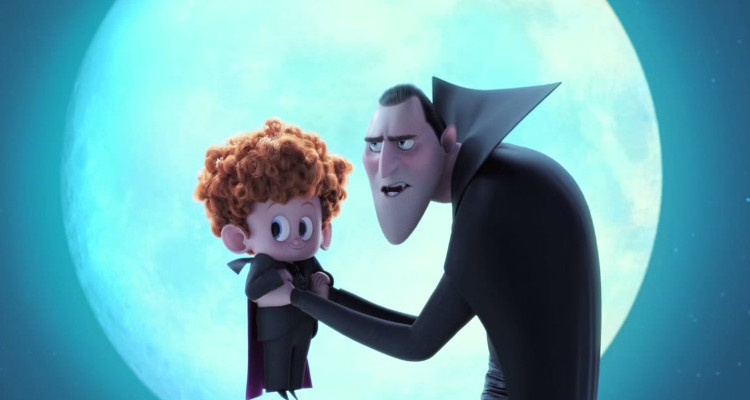 HOTEL TRANSYLVANIA 2 (USA/PG/89mins)
Directed by Genndy Tartakovsky. Starring Adam Sandler, Selena Gomez, Andy Samberg, Kevin James, Rob Riggle, Steve Buscemi, Megan Mullally, Nick Offerman.
THE PLOT: It’s time to return to the hotel for monsters, ghouls and vampires this October, with the sequel to 2012’s ‘Hotel Transylvania’. Dracula’s (Adam Sandler) daughter Mavis (Selena Gomez) has married her human love Jonathan (Andy Samberg), and when their son Denis (Sunny Sandler) is born they have until his fifth birthday to discover whether he is human or vampire. The trouble is that if Denis is not a vampire, Mavis wants to leave the hotel and go to the human world, something that Dracula is dead set against.
THE VERDICT: ‘Hotel Transylvania’ was a decent enough idea for a film, which lost something in translation. This new sequel seems to be aimed at the smallest of the little ‘uns in the audience, which is all well and good, but there is nothing here for the adults who will invariably find themselves watching the film.
Adam Sandler returns, doing his best Steve Carell impression, and the rest of the cast pretty much pick up where they left off, and for the most part, Steve Buscemi, Selena Gomez, Andy Samberg, Kevin James, Rob Riggle and David Spade do fine. Newcomers Nick Offerman and Megan Mullally are good in their roles, playing on the natural tones of their voices, and Keegan-Michael Key takes over the role of Murray from Cee-Lo Green.
The story is fairly straight forward, but comes across in strange ways. At times it is difficult to tell whether Dracula wants to hold on to his only daughter or protect the Dracula family line, so obsessed is he with his young grandson. The film spends a lot of time jumping in and out of the hotel, but much of the time events seem to just be a gateway to a musical montage, which quickly grows tiresome. As well as this, the idea of an over protective father holding on to his family, and the traditions that he grew up with has been seen on screen so many times, that there is little here that feels fresh or new.
Director Genndy Tartakovsky, who has also returned to ‘Hotel Transylvania 2’, seems to want to make the film as manic and madcap as possible. Colours, lights and 3D whatsits fly toward the camera throughout the film, the music is bubblegum pop on loud and the slapstick gets a little tiresome after a while. There are some nice hints to vampire flicks of the past – including Francis Ford Coppola’s ‘Dracula’ adaptation – and vampire lore, but there is very little going on under the surface here, and surprisingly few laughs.
In all, ‘Hotel Transylvania 2’ is aimed at the tiny kids. There is no shame in this, but there is very little new, sophisticated or engaging for the older members of the audience. The voice cast do fine, the story is silly and the whole shebang feels like being thrown headfirst into a pile of glowsticks at a tween party; loud, bright and superficial.
RATING: 1/5
Review by Brogen Hayes