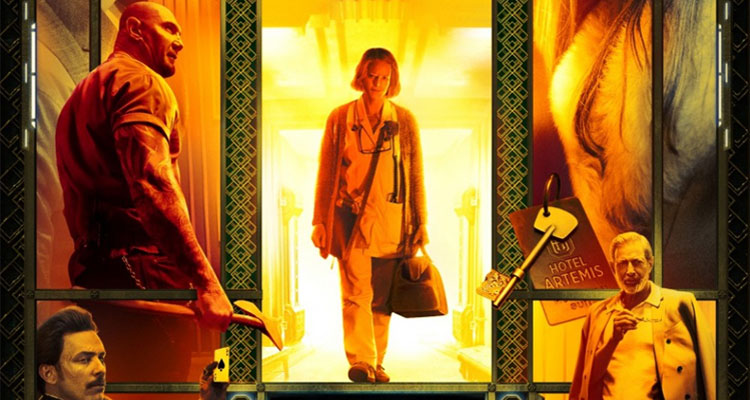 HOTEL ARTEMIS (UK / USA / 16 / 94 mins)
Directed by Drew Pearce. Starring Jodie Foster, Sterling K. Brown, Sofia Boutella, Jeff Goldblum, Charlie Day, Dave Bautista, Zachary Quinto.
THE PLOT: Los Angeles, the near future. Law and order has broken down, as the city is once again in the grip of violent riots. The only refuge for criminals is the secret, mythical Hotel Artemis. Run by The Nurse (Jodie Foster) and her hulking help Everest (Dave Bautista), it’s a safe haven for fully paid-up members – as long as they respect the rules, such as not killing each other. This is where we find bank injured robber Waikiki (Sterling K. Brown), slinky assassin Nice (Sofia Boutella) and the mouthy Acapulco (Charlie Day). There’s more on the way though: Mr Big himself, the Wolf King (Jeff Goldblum), is en route and rules are about to broken, along with some body parts…
THE VERDICT: At first glance, it might seem that ‘Hotel Artemis’ is ripping off John Wick’s ‘Hotel Continental’. There are notable similarities between them, such as the ordered world in which a misfit bunch of criminally-inclined characters find themselves having to being civilised. However, ‘Iron Man 3’ co-screenwriter Drew Pearce’s directorial debut is a somewhat different beast. It’s less of a hotel and more of an emergency operating room, where criminals can go in discretion to have their bullets removed through hi-tech methods. As The Nurse amusingly points out at one point, she’s been dealing with bullets, day-in, day-out, for 22 years.
She’s the calm at the centre of this whirling maelstrom, firm but not unsympathetic, ballsy but vulnerable, funny and serious often in the same scene. In a stroke of genius atypical casting, who better than a graying Jodie Foster to play this complex, colourful role? She brings some gravitas to what might otherwise have been a trashy crime thriller, with the other actors responding to her presence and upping their game too (even Day’s knucklehead criminal is bearable). That’s just one aspect of this entertaining thrill ride, which spends time establishing its characters (named after their rooms) and their quirks, such as a fantastic put-down by the Wolf King towards his overly protective younger son Crosby (Zachary Quinto).
Pearce’s script is sharp enough to know when to hold back on its characters, revealing their dangerous sides when things start to heat up. There’s a firm sense of world building here, establishing a confined environment and an outer problem that adds a sense of urgency. It’s a ticking clock thriller, which then irreverently blows up the clock. Predictable and safe aren’t keywords that apply to Hotel Artemis. It’s slightly off-kilter and is all the better for it. If there’s a fault here, it’s the running time. The pacing is short, snappy and to the point (of a gun barrel). However, this reviewer could easily have had a late check out. The plot threads are tied together a little too quickly at the end. Still, it’s worth checking into the stylish and ultra-cool ‘Hotel Artemis. It packs a punch… or two.
RATING: 3.5 / 5
Review by Gareth O’Connor

Review by Gareth O'Connor
3.5
Worth checking into