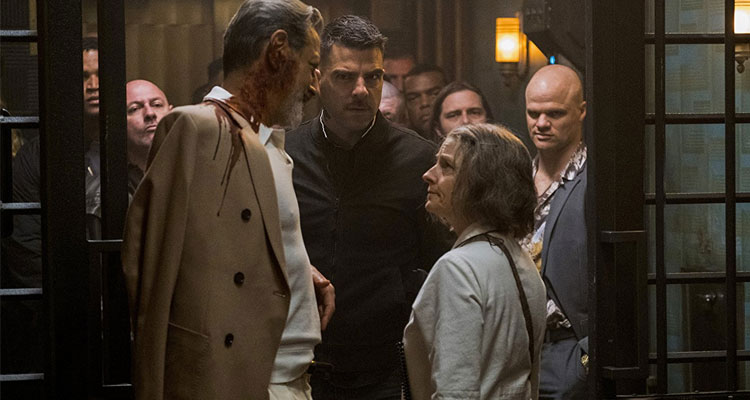 Boasting one of the strongest casts of the summer, HOTEL ARTEMIS is a futuristic sci-fi movie set inside a members only hospital for criminals. Starring Jodie Foster, Sofia Boutella, Jeff Goldblum, Dave Bautista, and Zachary Quinto. We caught up with writer & director Drew Pearce to chat about his film-making debut.

You’ve written scripts for big blockbuster movies like ‘Iron Man 3’ and ‘Mission Impossible Rogue Nation’. What was it about ‘Hotel Artemis’ that made you pick it as your first directing job?

I wish I could pretend it was the first movie I’d written to try direct but I’d written a few and the last one was a thing called ‘The Long Run’ that nearly happened, but it was a much bigger movie. So this was an idea I’ve had kicking around since around 2012, it was always stuck in my head, this idea of a secret hospital for criminals, I felt like it was the size of a movie that could be made as an Indie so I could make it my own and a bit more idiosyncratic than the bigger studio movie. People responded to the script and we managed to entice this fantastic cast to come on board, so it ended up being the one that was my first directed movie.

There’s so many layers to the film, was it a tough script to write?

The way I write is pretty specific, I have a little notebook, when I have an idea I scribble down something like ‘Bad Guys – Hospital’, that idea started to stick. I then write things down over the next two years, then I start a Dropbox folder and start to add in pictures that feel like they belong in the world of the movie I’m putting together, then a start a playlist and overtime accumulate songs that make me think about the movie. At a certain point they all accumulate into an idea that I have to sit down and write. Then the way I work is I write a really long outline, and I really do a lot of figuring out of the film in that, so that when I come to write its really quick and I don’t have to do any of the heavy lifting, I can just live inside the characters and enjoy them talking to each other. I wrote the first draft of the script in 19 days but the build up to it is like three years.

Jodie Foster surprised you by signing up for the film before you even sent out the script. What happened there?

We were preparing to send the script out and got a phone call saying Jodie Foster would like to meet about the role. She was too young for the role but ,,, she’s Jodie Foster, so of course I went and met her and we ended up speaking for three hours and she was incredibly enthusiastic about the script and also overall very helpful for me as a first time director. At the end of the meeting she said, ‘Look, I know you’ve not been out to anyone else yet, you need to go and talk to other people but please just know that I’m here and I really want to do it’. I said ‘Thank You’ and got in the car to phone my producer saying ‘We’ve got to get Jodie Foster in this film’.

Jodie is a director herself, did she have any advice for you or add any extra pressure?

It’s a bit of both, there’s definitely a pressure when your star has also directed because there’s a sense whether or not she might be looking over your shoulder thinking ‘oh God why is he doing that’ but she never actively did that, she was incredibly respectful, there’s also an aspect to it where she’s a wonderful resource. The advice that she gave me about being a director and releasing a movie was incredibly helpful. At the end of the day, she has been acting for 52 years, directing for 25 years and she’s been on more film sets than I will ever be on, so I’d be crazy not to listen to her.

The movie is set entirely over one night, what are the challenges of keeping to a specific 24-hour time line?

The movie was made on a small budget, and it would have been ambitious even on a bigger budget, the challenges of making something this ambitious on a small budget are mired. First of all none of the actors are really getting paid, so you have to schedule them in two days or three days and then you lose them again, similarly, we couldn’t afford to build a full floor for the hotel, we only had two rooms, so every few days, we ripped out the big picture, put a new one in and repainted the thing, that means as a director you can never go back and reshoot stuff. You’re always fighting time & the fact you’ve got no money, that stuff is all really difficult, its already really difficult directing a movie and that stuff doesn’t help. However, what’s interesting because it’s a movie that happens over one night, and there’s a certain tension in the movie, some of the tension gets baked into the process and it helps get into the DNA of the film.