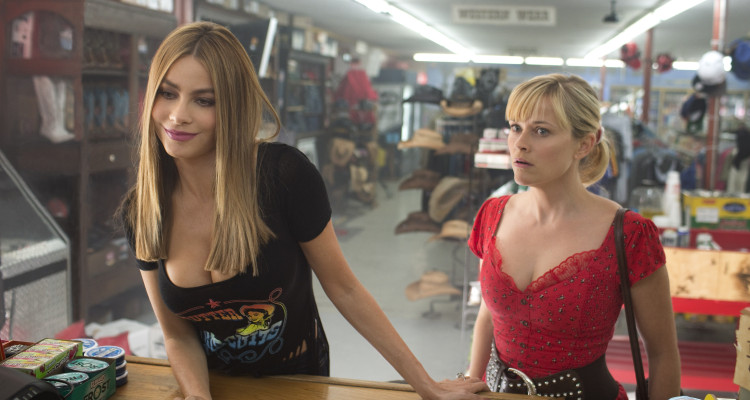 HOT PURSUIT (USA/12A/87mins)
Directed by Anne Fletcher. Starring Reese Witherspoon, Sofía Vergara, Michael Mosley, John Carroll Lynch, Matthew Del Negro.
THE PLOT: Uptight and by the book Texas cop Rose Cooper (Reese Witherspoon), who just happens to be on desk duty for over reacting to a simple statement is sent on protective detail for Daniella Riva (Sofía Vergara), the widow of a man who was set to inform on a dangerous drug boss. Things do not go according to plan, however, and the odd couple find themselves fleeing for their life from hitmen and crooked cops.
THE VERDICT: HOT PURSUIT sounds like a film that should work on paper; an odd couple comedy starring an Oscar winning actress whose breakout role was in a comedy (Witherspoon), and the hottest comedic actress on TV right now (Vergara), but the trouble is that the film is just not funny.
Witherspoon does her best with the uptight, rule following Cooper, but the character is so broadly written as to be ill defined, and there are times when her character arc just does not make sense. Vergara plays a loud Latina woman who is quick to fly off the handle and filled with fire and passion. There is no subtlety to the fact that Cooper needs Riva to help her to mellow out in life, and both Witherspoon and Vergara’s characters play so well into racial stereotypes throughout the film that one cannot help but wonder what the film would have been if the actresses had switched roles. The rest of the cast is made up of Matthew Del Negro, Michael Mosley and John Carroll Lynch, who have very little to do.
David Feeney and John Quaintance’s screenplay seems to have been hugely inspired by the odd couple cop comedy THE HEAT – which starred Sandra Bullock and Melissa McCarthy – but the jokes don’t land. Seriously, not once during the film is there cause for even a smirk, let alone a decent belly laugh. The chase across the state of Texas is also ridiculous, with the women dressing in a moose costume, hiding out in a casino and being somehow forced into a faux-lesbian embrace to fool a man into thinking they are not the women whose images are all over the news, even though their sole effort to disguise themselves is a costume change.
Director Anne Fletcher – who previously brought us STEP UP, THE PROPOSAL and THE GUILT TRIP – seems to have little grasp of comedy, and seemingly encourages her actresses to simply shout in the hope that this will be perceived as funny. As well as this, the pacing of the film is a mess with the women blundering from one stupendously silly situation to the next with no let up or time for the characters to develop.
In all, HOT PURSUIT is a hot mess. Witherspoon and Vergara are not given a chance to show off their comedy chops, the script is not funny, and the situations ridiculous. Fans of both actresses will be disappointed with their turns in this film, which feels like a cheap knock off of THE HEAT.
RATING: 1/5
Review by Brogen Hayes