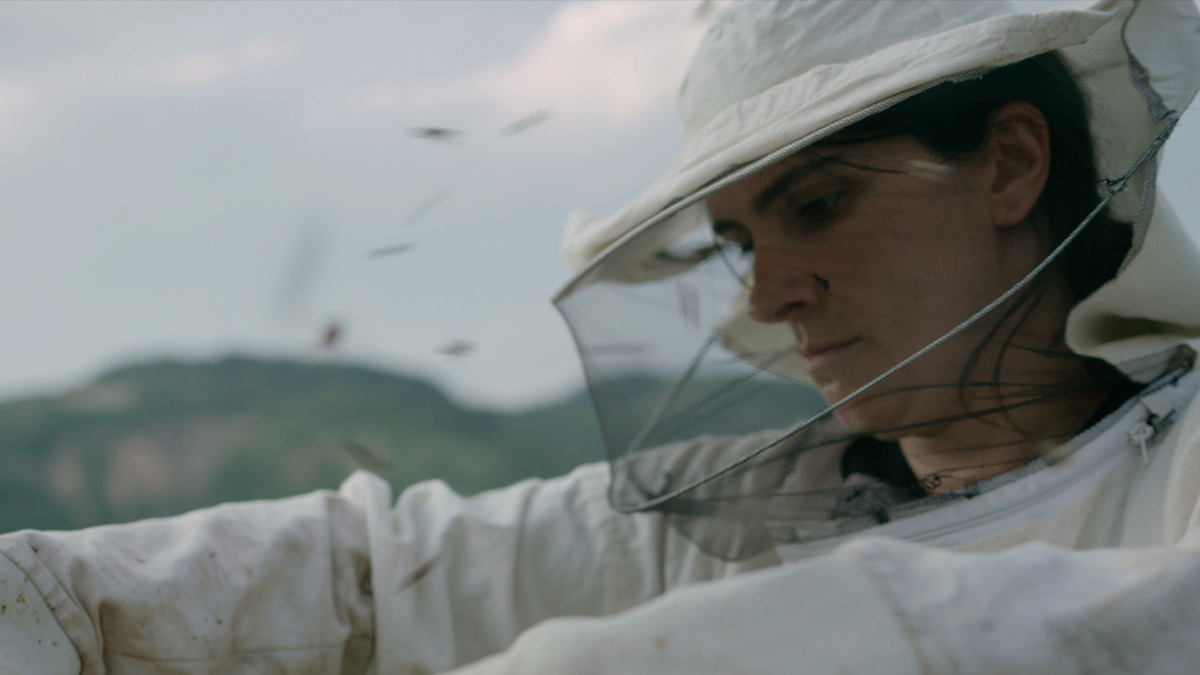 Blerta Basholli’s Sundance triple award winner Hive will be released in UK & Irish cinemas 18th March. The powerful drama is based on the true story of Fahrije (Yllka Gashi) who, like many of the other women in her patriarchal village, has lived with fading hope and burgeoning grief since her husband went missing during the war in Kosovo. In order to provide for her struggling family, she pulls the other widows in her community together to launch a business selling a local food product. Together, they find healing and solace in considering a future without their husbands—but their will to begin living independently is met with hostility.

The men in the village condemn Fahrije’s efforts to empower herself and the women around her, starting a feud that threatens their newfound sovereignty—and the financial future of Fahrije’s family. Against the backdrop of civil unrest and lingering misogyny, Fahrije and the women of her village join in a struggle to find hope in the face of an uncertain future.

How did you find the story of Fahrije?
Thank you, first of all, and yeah, well, we heard my then boyfriend, my now husband, he heard a story on TV while we were still in living in the US, because I lived there for a couple of years while I was studying. And, at that time, I was writing another script, which I thought was going to be my first feature film.

And we heard the story of Fahrije on TV and really believed on the story. The same year, we came back from visiting Kosova so we can and want to see Fahrije in person. And when I met her in person, it was more her character, her attitude, her personality that impressed me more. So, it was then when I decided that really, this is going to be film based on her story, her character driven drama, and I really want to focus the story on her and hopefully as realistic as possible.

And you spoke to us on meeting Fahrije. What was it like casting her? Because you say yourself, she’s a very impressive individual.
Well, interestingly enough, with this film, I think the hardest decisions were made the fastest because I really believed in it. Then with Yllka (Gashi), gosh, I had shot a short film while I was studying in the US. I knew her as an actress before, I think sometimes it really helps when you work with somebody, and you really know how they take direction. You can do that through auditions as well. However, it’s different when you work for a couple of days, and you get to know people and you get to really know how they work and how much they love their job as well.

For me, that’s also important. Besides being a good actor or actress and besides being professional in terms of like being prepared and all that, it really for me, it also matters when people love their job and love what they’re doing. And she is that person and so when I went to meet Fahrije, I got Yllka to come. So, we both met Fahrije together. She was kind of cast before even having the permission from Fahrije. So, in that sense, that for me was a fast decision.

And you know, the story of Fahrije is a deeply sad one, the backstory of it all is just so tragic. How long did it take you to kind of write that? I imagine it was quite a challenge to encompass all this story into quite a short film. I mean, it’s 84 minutes and you pack a lot in there a lot to digest for audiences.
Yeah, well, that was the hardest part because for me initially I didn’t after meeting Fahrije which was in 2011 and I didn’t start writing for a couple of years, because I was graduating. Then I had my first kid, then my second. After that I was working on other productions and around 2015, I started writing and even in the first meeting we spent like five or six hours with Fahrije so she could tell us her story and what she went through, and it is really a lot because she had gone through a lot during the war.

So that’s a whole movie in of itself. How she left the village and how she came back to search for her husband and never found him again. So how she dealt with her children during the war, she lost her daughter, and then found her again. Maybe because I also have been through war, I kind of had this, especially for that part, I kind of wanted to touch upon it a little bit at the beginning of the film. Not only that it was in the first draft of the script. I also wanted to see the husband. Of course, the water scene was not at the beginning in the script, and I had a little bit of them just seeing each other for the last time because I wanted that moment of seeing the husband’s face in the film. Then as you said, it was a lot of things and way too many things, even more things to digest for the audience. For us who have been through it, maybe we could have got it. For me, it was a lot about thinking what I want the audience to focus on. What do I want the audience to get from Fahrije’s story? So, I had to really take some distance because we always want to talk about work because we we’ve been through it, and I think we need to talk about it. But then I was like, I need to focus on the film. And what do I really want to say with this film. So, in that sense, I cut out the scene with a war because I also wanted the film to be present and realistic, rather than have a time passage or have a flashback or things like that. So, I kind of really wanted to stay in the moment. And that’s why I decided that the husband should be seen maybe through a dream. And that dream should be in the water because the characters doubt that the husband has been thrown in the water.

Sometimes in dreams when we’re looking for someone we miss, we can’t even see their faces, unfortunately, properly. So, for me, that was a stronger choice that I thought would work better than having a flashback or having something with a war. Then we decided to cut some scenes that were really distracting from her struggle to move on. At the end of the day, that was what really impressed me. That she could, after all that happened to her that she could stand up and move on.

Hive is a beautifully shot film. There is a sorrowful beauty to it whenever Fahrije is alone. There is a lot of scenes where she is in fields or by the river and the scenes seem to reflect how she feels.
I don’t think she ever had a moment to herself, besides when she’s in the bathroom, or at night when she was smoking or in the field or by the river. So those kinds of moments, I really didn’t want to use a lot of words to explain things because of the culture because what’s expected from these women to not express their feelings.

So, I wanted to really these moments reflect what she feels either through silence or through her intimate moments when she can actually be by herself. I think that sometimes when you are with a lot of people around you, I don’t think you can even think or feel or reflect for yourself in a way.

So, I wanted these kinds of images to portray how she’s feeling and maybe have a moment of her as a character to reflect and make decisions because sometimes we have a moment before she may like that before she makes another decision. So, it’s like, really for her also absorbing and making another decision. I try to do use these moments to reflect on what she feels and in what situation she is at that moment.

Your film has already started making history with the fact that you have won the three main awards at the Sundance Film Festival. How was that for yourself as your first feature?
It feels great, because, I mean, when we were working on this film, of course, we had a lot of obstacles during the process, financial and then shooting then while we were editing the pandemic happened. So, a lot of things happened throughout the process. Sundance was always important because I wanted to send the film there. We tried not to think much about festivals and awards while we were working because I just really wanted to do the best, I know I can. So, in that sense, we worked with that kind of thinking throughout the entire process.

We all really gave our best to it. We really tried to put everything we had in it. Then when Sundance happened, it was really a reward of everyone working on it. But mostly, it was unbelievably great. The whole of Kosova is proud of the film and everybody’s cheering with us, so it really comes with a lot of responsibility and a great satisfaction that people are really proud. Now we are shortlisted for the Oscars, and everybody is super excited about it. We really are making people proud but for me, it’s really what I’m the proudest of is the story itself and the story of these women, their community and their empowerment because they did it without any help. And I really wanted this community’s story to be heard and told around the world.

What do you hope audiences around the world get from the story of Fahrije and her story?
Well, I hope they will learn that if you try and continue no matter what you will make it. For me, that was the lesson I learned from Fahrije. If you try, if you work hard, you’re going to make it wherever you want to go. Giving up was knocking on her door every day in every moment. And she didn’t choose to give up and she had all the right to give up here. She had the pain for her husband. She had the entirety of the community on her back.

As well as that the women were resisting her at the beginning. At every moment, she could have given up and nobody would have blamed her for that. However, she chose not to. So, I think we should not choose. I mean it’s okay to give up sometimes and we all give up at some point. But hopefully we can get together and stand on our feet and move on because Fahrije did and if she could do it, we can all do it.