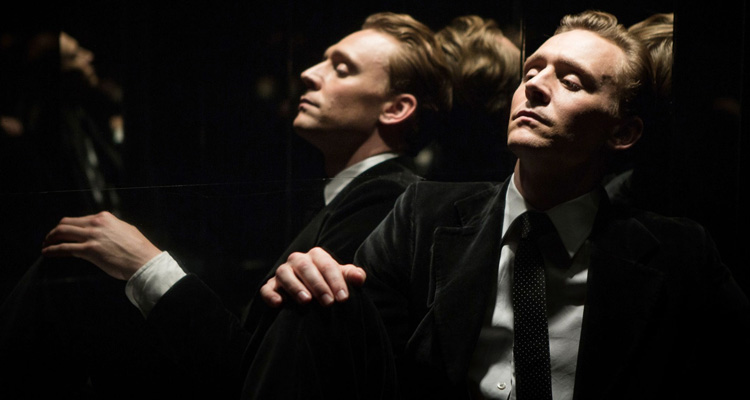 With High-Rise, the acclaimed British filmmaker Ben Wheatley who gave us ‘Kill List’ and ‘Sightseers’ takes on J.G. Ballard’s famous novel with unsurprisingly bonkers results, as you would expect from the pen of J.G. Ballard (the late British sci-fi novelist who also gave us ‘Crash’ and ‘The Drowned World’). It’s a droog-eat-dog world when we first meet Tom Hiddleston’s Dr. Robert Laing, reduced to living off his questionable wits after the experimental high-rise community he’s moved into goes feral. From the very poor at the bottom to the very wealthy up in the penthouses, not even the great architect behind it all (Jeremy Irons) is able to maintain any kind of law and order once the water, food and electricity dries up and the crazy kicks off.

How would you describe this film to the uninitiated?

It’s one of those novels that people kept telling us that, hey, you can’t adapt this novel, it’s unfilmable. But that’s nonsense. Ballard is very visual in his novels; it’s just the darkness that blinds people. They almost don’t want to address the nightmare that Ballard has created. But this isn’t ‘The Naked Lunch’. It has a plot. The three perspectives of the three men, and the building itself is a good structure to hang your drama around.

That dangers of being dependent on technology is even more relevant forty years later, of course, dealt with recently too in Stephen Fingleton’s The Survivalist. Part of the attraction for you…?

Yeah, that, and the class system was also an interesting element here. The division of rich and poor is far more depressing than our increasing reliance on technology. Much of technology is great – emails are wonderful, getting to read whatever you want at any time is marvellous – so, that’s not the main problem. It’s the gobbling up of all cash and all resources by a very small number of people is the real problem. And it’s managed to happen in a reasonably short span of time, and you have to ask, how can we redress that?

The seventies seemed to be the start of that happening, as far as I can see…

Haven’t read the book, so, is this entirely faithful to Ballard, or is there some Wheatley & Jump in there too?

I think there is. Comedy and tragedy are all over the other movies we’ve done, and pathos. And I like all that stuff, because that’s life. I like mixing the dark with the comic, either a comedy that tries to upset you or a horror film that makes you laugh. But this is more of a challenge, because compared to A Field In England was really about a point in British history when everything changed, and this is another point, in a total different time in British history, when everything changed again. And then, also, what attracted us to it was that we were both born in the ‘70s, so we have a trace memory of this. The shag-pile rugs, the parties, the formica. That point of time has been talked a lot by people who were adults at the time, but not so much the children of that time.

Empire referred to you as the hottest director in Britain recently – is that something you feel you have to live up?
Well, ‘High-Rise’, I wouldn’t say, is really a commercial film. I’m sure most Hollywood studios would just throw it out the window, but we wanted to be true to the book. That was our job here. Our next film, ‘Free Fire’, is definitely a step towards something more mainstream, but that’s not to say I’m heading in a particular direction. I’ve always enjoyed all kinds of cinema, and that won’t change, no matter how big a budget or a star might be. If it’s the right fit, I’m happy.

Tom Hiddleston is a big part of the jigsaw here, and his presence will give you a shot at a big audience, but there’s no denying the mixed response. And the stubborn darkness of the film…

We’ve always had big divides when it comes to our films, with only ‘Sightseers’ kind of tipping over into more positives than negatives. I couldn’t make a film for everyone, even if I tried. So, you make the work that you make. I make these films for an imagined audience that’s like me. I’m not a focus group kind of filmmaker.

The reviews have been really weird though. One review will pick up on things they hate, and those very same things will be loved by someone else.

The great thing about one of High-Rise’s most memorable scenes – when someone decides to use a certain film award as a weapon, after his mate shouts, “BAFTA him!” – is that you now have your very own BAFTA.

Yeah, they made one especially for me, because of that scene. I need never worry now about winning one, as I’ve already got that sorted. It’s got my name engraved on it!

Due out later this year, Free Fire has all the signs of being a cult favourite, and given that it’s basically a shoot-out in a Boston warehouse with a bunch of cool actors – Oscar winner Brie Larson, Cillian Murphy, Armie Hammer, etc – it could very well be a big hit…

Yeah, that one’s going to be a lot easier for audiences to unpack. It’s mainly just a whole lot of fun, but it’s also definitely a movie that Amy and I have made. It’s got a lot of elements in it that I really enjoy it – shoot-outs, action, all that – and it’s been a really satisfying itch to scratch. We’ve got a lot of different projects lined up, and difference is the key. We don’t want to repeat ourselves, taking on stuff like remaking Wages Of Fear, and a romcom, and a sci-fi actioner. It’s all good…