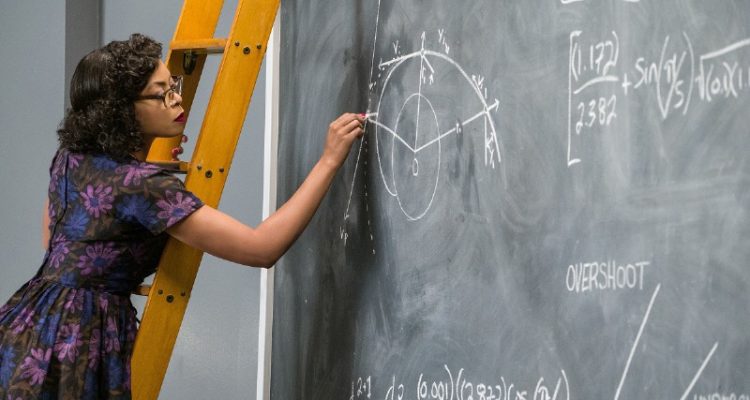 HIDDEN FIGURES (USA/PG/127mins)
Directed by Thoedore Melfi. Starring Octavia Spencer, Taraji P. Henson, Janelle Monáe, Kevin Costner, Jim Parsons
THE PLOT: In 1960s Virginia, when segregation was still very much in effect, three African American women, Katherine Johnson (Taraji P. Henson), Mary Jackson (Janelle Monáe) and Dorothy Vaughan (Octavia Spencer) not only defied expectations and rules, but helped NASA with the mathematics to launch the first successful US space missions.
THE VERDICT: Based on the book by Margot Lee Shetterly, and nominated for three Oscars, ‘Hidden Figures’ is a worthy and groundbreaking story, told in a light, engaging and almost frothy manner that not only makes the film engaging and utterly entertaining, but feels old fashioned in the very best of ways.
Taraji P. Henson leads the cast as the smart, tenacious and reserved Katherine Johnson. Henson makes the character the least outspoken of the three lead women, but makes her story engaging and enthralling. The audience knows from the start that Katherine is a woman more than capable of the mathematics to get a man into space, but she is stymied by her race and her gender. Henson makes sure that Katherine is just outspoken and tenacious enough to be taken seriously, without making her brash or abrasive. Octavia Spencer plays Dorothy Vaughan, supervisor of the “Coloured Computers” in everything but pay, and makes the character respectful but firm, with an eye for detail and opportunities. Janelle Monáe rounds out the central trio as the outspoken, funny and kind Mary Jackson. The rest of the cast features Kevin Costner, Kirsten Dunst, Mahershala Ali, Glen Powell and Jim Parsons.
Allison Schroeder and Theodore Melfi’s screenplay is based on a true story, which was explored in Margot Lee Shetterly’s non-fiction book “Hidden Figures: The Story of the African-American Women Who Helped Win the Space Race”. The screenplay keeps the story moving nicely, while bringing in just enough historical context to understand the political state of Virginia and the rest of the US at the time. The three central women struggle to be given respect and equal rights throughout the film, which is infuriating, but thrilling when tenacity and knowledge win the day. There is a feel that the three central characters are slightly stereotypical – the studious one, the older, stern one, and the loud sassy one – but the three actresses manage to make these attributes part of their characters rather than their defining traits, and save the film from parody.
As director Theordore Melfi makes ‘Hidden Figures’ a light film with a deep message, and the instances of segregation and disrespect throughout the film only serve to underline he battles that these women were tirelessly fighting. As mentioned, enough historical context is given to understand that 1961 was a time of unrest in the midst of the Civil Rights Movement across the USA, but this is not the focus of the film, even as it informs and underlines the tenacity and courage of the women whose story it is. The film is well paced and engaging, and Melfi has coaxed engaging and subtle performances from his cast.
In all, ‘Hidden Figures’ – which of course refers to the maths and the fact that African American women were, and often still are, overlooked – is a light look at the life’s, choices and tenacity of three women that not only changed the Space Race, but made strides forward here on the ground.
RATING: 4/5
Review by Brogen Hayes