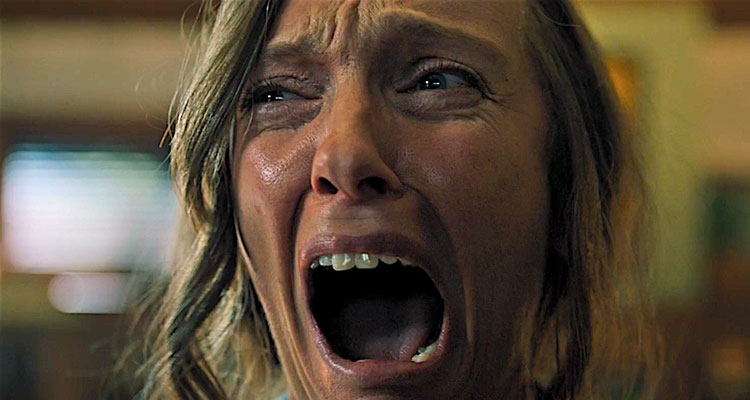 In short: Masterpiece of terror

The Plot: Model designer Annie (Toni Collette) is in mourning. Her mother, with whom she had a difficult relationship, has died at the age of 78. She isn’t quite able to process it all right now, even though she has the support of husband Steve (Gabriel Byrne) and their two teenage kids, Peter (Alex Wolff) and Charlie (Milly Shapiro). Annie withdraws deeper into herself and discovers dark secrets not only about her mother but her hereditary line. The nature of evil courses through the veins of this family. Soon all of them are affected by strange occurrences in and out of the family home. This nuclear family is about to implode in the most ghastly way imaginable…

The Verdict: Strap yourself in for one wild, infernal ride through a family’s own personal hell. Hereditary could very well be the horror film of the year. Describing it as a horror film may not do it justice though. There’s something else, something uniquely unsettling, about this astonishing debut film from Ari Aster that defies description. It transcends the cliched genre trappings of a horror film being about signposted jump scares or a plot involving the otherworldly. If anything, it’s quite Kubrickian in its depiction of a family unit coming under threat and disintegrating through both external and internal forces. The Shining has a new cousin.

After working in short films for several years, Aster concocted this barnstorming idea for a film, wrote the script and then delivered a film that has rightly been gathering acclaim since it shocked Sundance audiences earlier this year. Believe the hype for once. Hereditary is a film that creeps up on you, drawing you deeper into its unravelling story. The less said about the story, the better. It’s an onion plot, so to speak. Aster peels away one layer after another, getting to the rotten core of this deeply dysfunctional American family. More so than the supernatural element, he rams home the idea that the scariest people might be your own family – the people who you know the most.

For a first-time feature director, Aster shows a supreme confidence and sure-footedness that most directors only find after a handful of films. He shoots the house like its own self-contained landscape, as suggested by the eerie opening shot. What terrors lurk in the shadows, barely visible to our characters and the audience? Like any good horror director worth his blood, he favours suggestion rather than outright explanation. This is most evident in what will infamously become known as ‘The Car Scene’, in which he holds back with admirable restraint. The film looks and sounds superb too, with creepy sound design that has scuttling sounds in the rear speakers to make you sit even more uncomfortably.

Collette and Byrne were involved not just in the acting, but also the production of the film. It’s a vote of confidence in the material, which sees the two veteran actors giving different shades to their characters. Annie becomes unhinged, Peter loses control, Charlie sees things and Steve acts as the voice of reason between them all. All four actors give fine performances, but Collette deserves special mention. She goes full throttle with her character, making Annie’s mental collapse all the more horrifying. She’s reminiscent of Kathy Bates in Misery – the kind of performance from a respected actress in a horror film that deserves an Oscar nomination at the very least.

Hereditary is a disturbing psychological horror film with the gloves very much off. Aster isn’t interested in playing it safe here. He wants to scare the living daylights out of his audience, with his film crawling under your skin and making a home there. When so many horror films simply fail to even be scary (looking at you, Truth Or Dare), Hereditary is that rare beast that stands out from the rest of the pack. It’s a modern masterpiece of terror, which will haunt you long after the credits roll and you’re ejected back into the real (safe?) world.