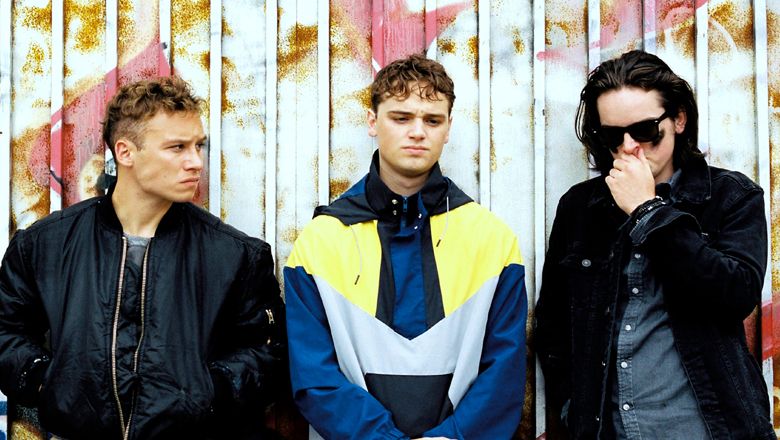 HERE ARE THE YOUNG MEN – Interview with Eoin Macken

Filmed in Dublin, Here Are The Young Men is a fresh and shocking film that tells the story of aimless teenager Matthew (Chapman) and his disaffected friends leave school into a social vacuum of drink, drugs and thrill-seeking in one last summer of adolescence. Matthew romantically yearns after his free-spirited friend Jen (Taylor-Joy) and struggles to maintain his increasingly disturbing relationship with the magnetic but sadistic Kearney (Cole). Whilst their precocious friend Rez (Walsh-Peelo) has started to succumb to paranoia and depression. Matthew and the group are soon led by the deranged Kearney into a world of nihilistic violence, falling into shocking acts of transgression that will irrevocably change their lives.

Here Are The Young Men is based on the acclaimed novel of the same name by Rob Doyle.  The film is directed by Eoin Macken (Cold) and co-written by Doyle and Macken and boasts an all star cast including including Dean Charles Chapman (Game of Thrones, 1917), Finn Cole (Peaky Blinders), Golden Globe™ winner Anya Taylor-Joy (The Queen’s Gambit, Emma), Emmett J Scanlan (Peaky Blinders), Travis Fimmel (Vikings, Danger Close), Ferdia Walsh-Peelo (Sing Street) and Conleth Hill (Game of Thrones).

We caught up with director Eoin Macken to chat about the film.

What was it like working with writer Rob Doyle on Here are the Young Men?
Rob is brilliant, he really is. The reason I wanted to make this movie was because of Rob’s writing also because Rob has similar tastes to me. He probably knows more about cinema than I do. He knows these characters I just wanted to make this a cinematic journey.

What was it like getting your cast together? You have actors who are in for moments, like Travis Fimmel or Emmett Scanlan and they have quite the impact.
We got lucky with the cast, Daniel Hubbard was our casting director and we worked really hard to get people who brought something to every character. When you get someone like Conleth Hill to play Kearney’s dad it just elevates the film. Then you have Susan Lynch who plays Matthew’s mom and it just elevates the material. Just because every character you put into the script had to be there and had to serve an important purpose towards driving the characters so you want to have people that will elevate what you are doing. This allows you then to create the story and allow the cast to do their thing.

And Travis, that character he plays was important for me to have in the film and Travis just brought something so tremendously bananas to the role. He also designed his own costume choices, that’s all I’m saying. It was great because everyone who got involved with the film brought a great energy to it. Everyone bought into what their characters were. You know you can only really make films if the people you’re making them with are on the same page as you. From every aspect of it, from costume design with Aisling Wallace Byrne and hair and makeup and cinematography. If they’re all on the same page you can create something.

Travis was just so committed and so was Dean and Ferdia and Finn. Everyone lived and breathed what they were doing. It was a pleasure to make this film because I was surrounded by all these talented people.

True, now not to make anyone stand out but was there a particular character you wanted to get right? Some people would say it’s Matthew, but there is an argument that it could be Kearney because he is an inciting incident.
To be honest they were all important, not to sound ridiculous. They were all important in their own way. Trying to get the balance from Rez, making sure that Jen felt very truthful and real. That’s why having someone like Anya was so important because she is so strong and embody that strength.

The most important dynamic was the Matthew and Kearney relationship and to allow Finn to create a character within Kearney that is a heightened borderline sociopath but at the same time have him as a real person becomes a reflection of Matthew. Then on top of that, you have to justify their friendship. Everyone I think that they grow up with, who’s a little bit mad and you’re not sure what will happen when people get drunk. With Here are the Young Men we wanted to push that to its extreme.

Is that why you cast Emmett Scanlan? His scenes after all are bite-size but they hold a lot of weight.
Well, I think Emmett is one of the most underrated actors in Ireland and I’ve known him for a long time and when I was writing that character I told Emmett early on before he’d read for that character that he would be playing that character. The reason was that I really wanted that character to be somebody you cared about but was also someone who you were also unsure about. There is a softness to this character that the audience can attach to but then there is a clear danger. Emmett just went with it and you don’t control Emmett, it was great.

There’s a scene early on with the iconic join the dark side line from Darth Vader and it sets the tone for Kearney as a character. Was that deliberate?
Yeah, it was and with that, you also have Travis’ character tempting Kearney even further to the even darker places. And Kearney comes back and tempts Matthews into that. I think everyone has that someone who brings you down a path sometimes where you might not necessarily want to go but it’s always a possibility and so Kearney just takes that to the extreme, where he is pulling them all to that immoral side and that immoral vacuum. I think if you don’t have a guiding force structurally from a family point of view you can easily fall down. Especially with Kearney because he has that kind of charisma that can draw you in.

They are very defined by their family relationships or lack thereof? Rez has no family that we see so the lads are his. So when they’re not there for him he feels betrayed. With Kearney’s father, he’s not abusive but there is a disconnect and with Matthew’s mother she’s not there for him emotionally. Was that important to nail down that dynamic?

These families really embody what these characters are. You really needed to see what relationship Matthew had with his mother, what relationship Kearney had with his father and the fact that Rez doesn’t have familial relationships. He’s very much on his own and I wanted Rez to feel on his own and quite separate and it’s important for audiences to see that the characters do suffer from the kind of relationships they do have. Both Matthew and Kearney suffer emotionally and intellectually and that allows things to happen around them. They made choices and they don’t have any moral barometer to judge it off.

There’s a scene towards the end of the film with Anya. It’s a harrowing scene and though the film is set in 2003 these are elements we are dealing with now. What do you think would have happened if Here are the Young Men would have been released in 2003?
I never thought about that, I probably wouldn’t have been able to make this type of film. I do know what you mean though. The important thing about this movie was to set it in the times of 2002/2003 in terms of how it would look visually and the influences of it but at the same time to bring in a couple of social and moral dilemmas that are relevant right now and so the incident that happens to Jen is something that I think happens quite a lot and so it needs to be addressed.

She has a strong reaction to it and it was really important to allow her character to be able to look after herself but at the same time see how Matthew reacted to that and that’s what the movie ended up becoming about. And whether his reaction was right or wrong, I want the audience to see how they feel about it because if that happened to you how would you react?

You have gone on as an actor in America, but you’ve come back to Ireland as a director and writer. What has it been like doing the circuits for a film that is clearly important to you?
It’s a bit of a shame we can’t do it in person or in a cinema and we were still hoping to release it in cinemas this year. I’m really proud of it and really proud of everyone involved. They all worked so hard on this. I just hope audiences enjoy it and it was important to make a movie in Ireland because this is a movie close to my heart and this was how I grew up, apart from all the mad stuff that happens obviously.