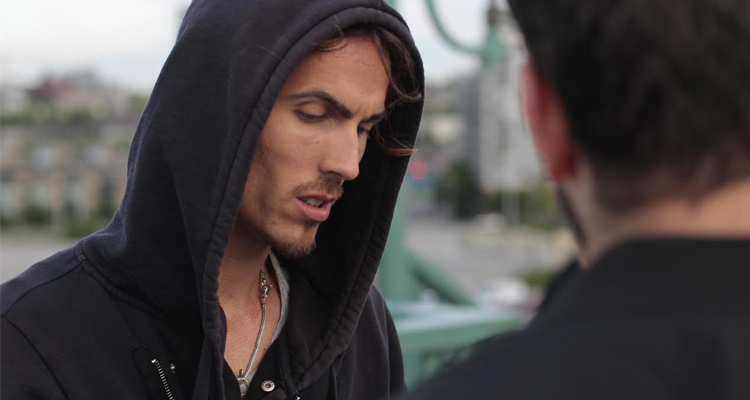 ‘Heart Over Heard’ is the new short film from Dylan Townsend that tells the story of happy-go-lucky yet hapless Edel (Bronagh Waugh) who’s neurotic mind chatter audibly navigates her journey from work to home and the peril of encountering various strangers at dusk and one in particular… will she listen to her heart or her head?  Shot on a state of the art RED Dragon camera with the stunning backdrop of Vancouver city centre, this heart-warming short chronicles the many encounters we face in any city on our journey from work to home and the obstacles we must navigate such as strangers, danger, friend or foe… In this day and age, is it right to question everyone and be hyper aware of potential threat? Should we go with our gut instinct? Or should we open ourselves up to possibilities of brave, new and exciting opportunities? Who knows…. the love of your life may have just passed you by…

Where did the idea for Heart Overheard come from?
In Vancouver, when out with a female friend, she began telling this story of how she felt unsafe on her own when walking home at night and how all these different thoughts run through her head everyday, many of which she would love to say but can’t express. This made me think of the mirrored male experience of how when we see a women on her own, we always try and compensate and think of ways to make her feel more safe, like staying further away from her etc. It also opened up the idea of trust within society, how frayed or strong is the trust between the sexes and do we feel men are guardians or are they sexual predators.

How long did it take to make?
The turnaround was very quick. From script to finished product it will be 5 months.

Was it difficult to get funding for?
The Canadian film funding system is quite good and there are channels to funding. With this project, there is a lot of good will and free time and resources put in to the short. Hadron Films, the Canadian production company behind the short have a full production suite, a large rental division and were prepared to produce the short for very little given the expertise and resources.

What is the plan for getting it shown in festivals and on the big screen?
We are currently creating a festival strategy which will revolve around a global short film festival plan. We will of course be focusing on Irish film festivals also.

How long have you been making films for?
I have been making films since my teenage years with the onset of early digital camera’s. I made some initial shorts then and now for the past 4 years have focused strongly on creating content for Film & Tv.

Some of the best political drama’s would have to include the 70’s film ‘Network’, ‘All the Presidents Men’, 90’s film ‘Wag The Dog’ & more recently ‘Spotlight’ & ‘Our Brand is Crisis’.
In terms of directors, I have studied ‘Sidney Lumet’ and ‘Alfonso Cuaron’ in depth and screenwriter ‘David Mamet’. I also take influences from many of the early modern American writers including ‘Kerouac’, ‘Hunter S Thompson’, ‘Ken Casey’ & ‘Tom Wolfe’.

What films of 2016 have impressed you?
I just watched ‘Swiss Army Man’ which is utterly impressive. Such a level of creativity went into that comedy and I feel the ‘Daniels’ will be a new directing force in the industry. I also really enjoyed, ‘Our Brand Is Crisis’, ‘The Revenant’, new comedy sitcom ‘Superstore’ and a documentary called ‘The Music of Strangers’.

What advice would you give to someone starting out in the world of film making?
When somebody rejects you, which they inevitably will, push through, go deeper and keep producing something of artistic integrity. It’s a hard industry, like any other and persistence is key.

What have you got lined up next?
My comedy series ‘Hipsterverse’ which was shot in Vancouver is now airing in the US. So continuing to persue that project. I am about to shoot another comedy sitcom pilot this month in Vancouver called ‘APT’. It’s a comedic take on 6 young millenial’s, who’s lives all revolve around an apartment in downtown Vancouver. The cast has two males and Four female’s, so the gender dynamic is unique and it should be interesting to see how it plays.