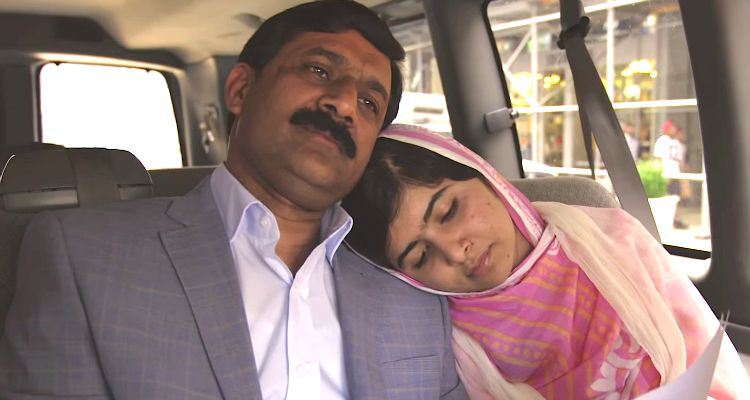 He Named Me Malala

HE NAMED ME MALALA (United Arab Emirates | USA/PG/88mins)
Directed by Davis Guggenheim.
THE PLOT: “There is a moment when you have to choose whether to be silent or to stand up”. So says Malala Yousafzai who, in October 2012, at the age of 15, was shot in the head on a schoolbus, for daring to speak publicly about the rights for young women to be educated, under Taliban rule in her native Pakistan. The world watched as Malala recovered from her injuries, and didn’t give up her crusade. For the first time, Malala gets to tell her story on screen, and audiences get a peek behind the famous face, into her every day life.
THE VERDICT: The first thing that strikes you on watching He Named Me Malala, is just how remarkable this young woman is; not only was she shot in the head and recovered, but she has no problem talking to world leaders about issues she is familiar with, with a unique insight. Ask her to talk about boys, or the possibility of asking someone on a date however, and you are reminded just how young Malala Yousafzai really is, and what an incredible life she has led.
The film begins by explaining its title – Malala was named after a teenage girl named Malalai who, according to legend, encouraged the Afghan army not to give up in their fight against British troops in the 1880 Battle of Maiwand – which goes a long way to pointing out the similarities between Malala and her namesake. This is a subject that comes up time and again and, although many in Pakistan – where Malala’s book is banned – believe that she is a character, or someone who mindlessly repeats the words of her father, the film goes a long way to dissuade audiences from that notion, and stress that everything Malala has done in her young life was her choice.
From here, the film shines a light on the new life that Malala and her family find themselves living; from adjusting to life in the Western world, the effect that taking time off school has on Malala’s grades and her relationship with her parents and brothers. What emerges is a picture of a startlingly ordinary young woman who squabbles with her brothers and struggles to make friends in an unfamiliar world, who is also a world figure, beautifully eloquent and engaging.
Director Davis Guggenheim – who won an Oscar for 2007’s ‘An Inconvenient Truth’ – carefully balances the film to give a greater insight into the injustices that Malala speaks out about, her life as a public figure and her personal life with her family. The tales of the past are told through animated sequences that are beautifully done, with words being shown as light, and this is mixed with documentary and newsreel footage of Malala in her various roles as activist, sister and daughter. There is the feel, from time to time, that He Named Me Malala is a film aimed at teenagers to try and get them interested in activism, but Malala is such a fascinating person, this is hardly an issue.
In all, ‘He Named Me Malala’ is a look behind the scenes of one of the most famous activists of today, the youngest recipient of the Nobel Peace Prize and a young woman who could not be silenced with a bullet. The film is carefully constructed to give background to the public face of Malala, and does so incredibly well.
RATING: 4/5
Review by Brogen Hayes