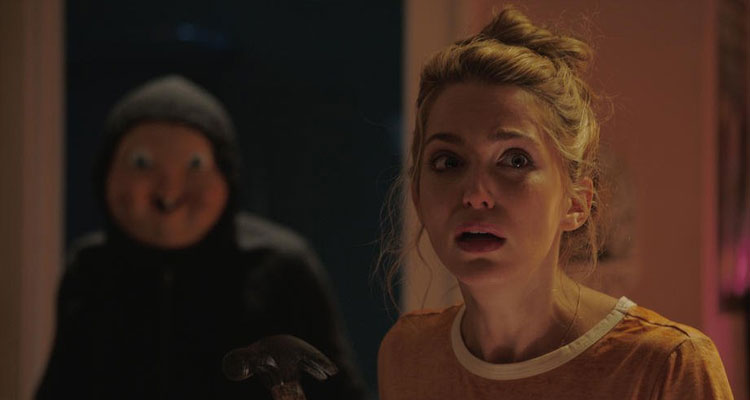 HAPPY DEATH DAY (USA/15A/96 mins)
Directed by Christopher Landon. Starring Jessica Rothe, Israel Broussard, Ruby Modine, Charles Aitken.
THE PLOT: College student Tree (Jessica Rothe) wakes up on her Birthday to find herself in the dorm room of nice guy Carter (Israel Broussard). So far, so normal. Later that night, she’s stalked by a maniac in a babyface mask who then kills her. She wakes up again to live out the same day until she can figure out who the killer is. But with each death, her body is taking a toll…
THE VERDICT: ‘Happy Death Day’ is essentially a horror movie remix of ‘Groundhog Day’. The latter is even name-checked at one stage. Scream, however, is not. It’s as if post-modern, meta horror never happened. So, this could be a film from 1993 then. It runs through the whole horror playbook, from a masked killer, a not-too-bright blonde heroine and enough red herrings for market day. However, it has none of the subtlety of Groundhog Day or its knowing humour. It borrows quite liberally from ‘Groundhog Day’ – even the message of being nicer to people to effect a possible solution.
However, that’s all redundant when it becomes apparent how lame and lazy the script is. It relies heavily on replaying events with little plot progression. Tree is an airhead sorority girl too – the type who usually gets offed in the first 15 minutes of a slasher film. Building a film around her could have been funny (a twist on the genre’s Final Girl), but instead she’s just plain irritating. Director Christopher Landon injected a lot of heart and humour into his previous film, Scouts Guide To The Zombie Apocalypse. He forgets to do the same here, delivering entirely predictable results, even ripping off another film, Urban Legend, in the process. Is that all there is?
Producer Jason Blum has been quite savvy in making effective, low budget/high return horrors. ‘Happy Death Day’ is just horrific though. It’s derivative of a superior film, mind-numbingly boring and entirely predictable. It’s all about the trick here, but it rings hollow. There’s no treat – just an empty wrapper. Dire.
RATING: 1 / 5
Review by Gareth O’Connor

Review by Gareth O'Connor
1
All trick, no treat