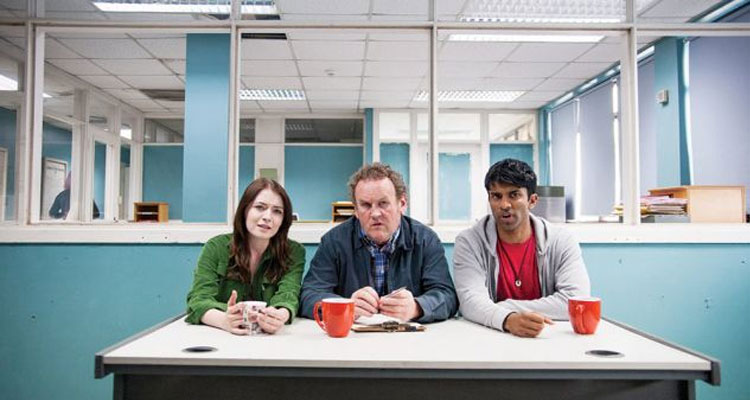 ‘Halal Daddy’ is the new culture clash comedy from Irish director Conor McDermottroe, it’s a classic fish out of water story about a British-Indian Muslim called Raghdan, who moves to the west coast of Ireland to hang out with his surf buddies and Irish girlfriend Maeve. All goes well until his father arrives from England with the peculiar gift of a meat factory. How will Raghdan cope with this poisoned chalice of a present – a career opportunity that he never wanted?

The movie is co-written by Mark O’Halloran, who has previously worked on scripts for acclaimed films like ‘Adam & Paul’, ‘Garage’ and last years Cuban drag movie ‘Viva’.

You co-wrote alongside director Conor McDermottroe, how was it writing as a duo?
This was my first time co-writing and I enjoyed the process. As Conor was directing, this was his baby, and I was delighted to help in any way I could. I very much liked the tone of Conor’s first draft, and part of my job was to figure out what he wanted to change and to help deliver the warm-hearted comedy-drama they were looking for… I’m fascinated by the new ethic mix found in Irish towns and cities – it hasn’t really been written about before and so that made it feel like a fresh idea.

Audiences love comedies about mismatched In-Laws, from ‘Meet The Parents’ to ‘The Birdcage’ to ‘My Big Fat Greek Wedding’, what do you think is the appeal of these awkward family encounters on screen?
I think they are successful because we see ourselves in them. I think we have all lived through the family trauma of an upcoming wedding or the mortifying agony of meeting in-laws for the first time. These are all high drama situations that usually resolve themselves in a party and a celebration. We know these stories because we have lived them.

Where did you look for research?
I think there is no other film in the Irish canon that deals with these issues so we were pretty much on our own and it was that that drew me to being involved. I did watch things like ‘East Is East’ and ‘My Beautiful Laundrette’. Though what Conor had in mind was very different in tone to these examples too.

You play the role of Omar in the movie.  Do you write the character differently when you know it’s your role?
The part of Omar is a very small part really and I was delighted to play it. I might have given myself one very good joke but other then that I was more focused on the writing than on my own acting career.

Deirdre O’Kane steals the show as the wisecracking aunt. How much of that was on the page… or did she bring more to it?
Deirdre brought her own comedic brilliance and a truthfulness to the role that makes the performance very compelling indeed. She and Paul Tylak are an utterly brilliant couple in it.

Talking about the movie, Colm Meany said “I don’t think Conor and the guys here were expecting me to come in and do a highly comic performance – but they’ve kind of got one. It just grew into that.”… Did Colm surprise you in how he brought his character to life?
Colm is brilliant. We all know that. He has all the technique and all of the timing to land gags and deliver laughs. But he is also very touching in it. I did know he was going to be great in the film. But he actually ended up being better than that.

Having written ‘Viva’ and now ‘Halal Daddy’, how do you feel about diversity in Irish cinema? Do you think there should be more?
I think there is great diversity in Irish Cinema already and I hope it continues like that. 20 years ago it seemed that Irish films could only be about nationalism. All that has changed now. I think anything is possible. It is very exciting.