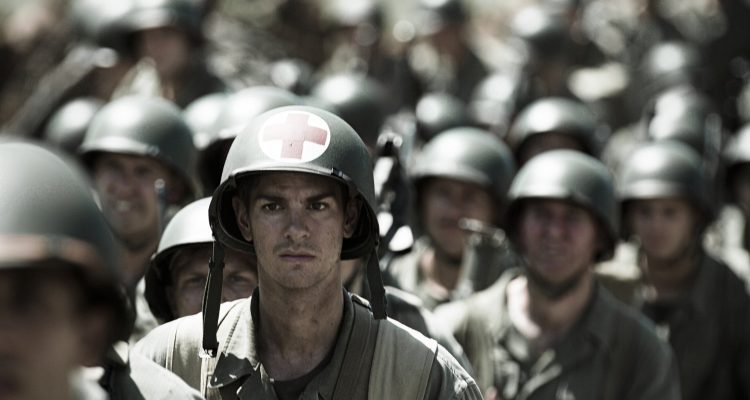 HACKSAW RIDGE (Australia | USA/16/139mins)
Directed by Mel Gibson. Starring Andrew Garfield, Vince Vaughn, Teresa Palmer, Sam Worthington, Hugo Weaving.
THE PLOT: Desmond Doss (Andrew Garfield) enlists into the army during World War II, even though he is, as he says, a “conscientious collaborator”. Doss will not pick up a weapon during his training, which almost gets him court marshalled, but when he is stationed to the Battle of Okinawa as a medic, his tenacity and strength mean that he accomplishes something truly incredible, and becomes the first conscientious objector to receive the Medal of Honour.
THE VERDICT: ‘Hacksaw Ridge’ is Mel Gibson’s first film as a director since ‘Apocalypto’ in 2006, but fans of his style will be pleased to know that Gibson has retained his usual flair for depicting violent events unflinchingly, while telling a story about a most unusual man.
Andrew Garfield leads the cast as Desmond Doss, and although his accent veers a little toward Forrest Gump at times, Garfield makes Doss a charming and tenacious character. Other than his religious beliefs and his love for Dorothy (Teresa Palmer, we do not learn much about the character, but it is just enough for Garfield to make him the heart of the film. Vince Vaughn takes on a strange role as Sergeant Howell, and while he tries to make the character tough and imposing, it is hard to resist the urge to giggle, perhaps Vaughn is too adept at comedy to make this role truly work. Hugo Weaving makes Desmond’s father Tommy a damaged and vulnerable man, who covers his pain in violence and rage. It should come as no surprise that Weaving is tremendous, nuanced and subtle in this role, as is Rachel Griffiths in her smaller role as Doss’ mother. The rest of the cast features Teresa Palmer, Sam Worthington, Richard Roxburgh and Milo Gibson.
Robert Schenkkan and Andrew Knight’s screenplay makes sure to underline the hardships that Doss went through before even getting to the battlefield in Okinawa, from a violent childhood to being constantly berated, mocked and beaten during his basic training. Although these story elements are necessary for the audience to understand the character, there are times when each new element of the story feels drawn out and overly long, and prevents the audience from truly engaging with the character on the screen. The dialogue in the film is fine, although nothing special, and the tension toward the end of the film is carefully built.
As director, Mel Gibson manages to give each of the characters their own charm, even the bullying sergeant and Doss’s alcoholic father get their moments of humanity and kindness, and the performances in the film are well crafted and carefully constructed. The film struggles through the first two acts, since they feel overly long, before getting to the savage, violent and gory battle in which Doss distinguished himself. Gibson seems to take pleasure in flinging body parts are gore at the screen, and showing the realities of combat front and centre, although the more squeamish in the audience may find these images nauseating and overly graphic. The story of ‘Hacksaw Ridge’ is well told, although there are times when brevity could have made the film less of an ordeal to get through, and the manipulative soundtrack could have been dialled back a notch.
In all, ‘Hacksaw Ridge’ is the story of a remarkable man and the extraordinary feat of saving 75 wounded men from a violent battle, but less scattershot gore and a tighter edit could have turned ‘Hacksaw Ridge’ from a good film to a great one.
RATING: 3.5/5
Review by Brogen Hayes