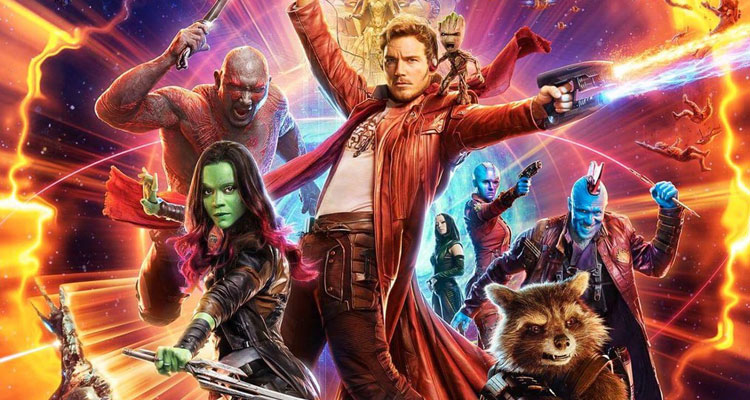 Guardians of the Galaxy Vol. 2

GUARDIANS OF THE GALAXY VOL. 2 (USA/12A/137mins)
Directed by James Gunn. Starring Chris Pratt, Zoe Saldana, Karen Gillan, Dave Bautista, Vin Diesel.
THE PLOT: Not long after the events of the first film, the Guardians are tasked with protecting valuable batteries from attack. Although they complete their mission their employers – The Sovereign Race – are not too happy to learn some of their batteries are missing. When the Guardians are saved from an epic space battle by a mysterious stranger, they realise that this man may have answers about Peter Quill’s (Chris Pratt) true parentage, and be the link to the family that Quill never knew. I am Groot!
THE VERDICT: Three years after ‘Guardians of the Galaxy’ burst into the worldwide box office, capturing hearts and minds of fans and newcomers alike, this lovable band of misfits are back with a more personal story than the one that went before, and some valuable lessons for the audience about the nature of family.
Chris Pratt, Zoe Saldana, Karen Gillan, Vin Diesel, Bradley Cooper and Michael Rooker all reprise their roles from the first film, and the chemistry, comedy and deep emotional heart that they created the first time also returns. Karen Gillan gets more of a chance to make Nebula feel like a rounded character, Vin Diesel makes Baby Groot the cutest thing in cinemas so far this year, and some unlikely pairings throughout the film make for some interesting revelations throughout. The returning actors are joined by Kurt Russell as Ego, whose character is utterly charming, but ultimately lives up to his name, Sean Gunn who finally gets some decent face time in a ‘Guardians’ film- Gunn provided the mo-cap for Groot the first time around – Elizabeth Debicki as the proud Sovereign leader Ayesha and Pom Klementieff as the awkward but sweet Mantis.
The story, written for the screen by James Gunn, has all the comedy and quips we have come to expect from a ‘Guardians of the Galaxy’ film, but since this is a tale of family – both chosen and blood relatives – there is a deep vein of emotion running throughout the film that Gunn is not afraid to mine, and does so in a balanced and engaging way. The set pieces are well spaced throughout the film and, since this film does not tie into the wider MCU as a whole, there is a feeling that ‘Guardians of the Galaxy Vol. 2’ is a film that truly stands alone, without being stymied by trying to fit into a wider narrative.
As director, James Gunn balances comedy, family drama and action very well, and although the final set piece feels a little drawn out, the film as a whole is well paced, with the story moving at a fun and compelling pace. As mentioned, some unexpected pairings of the characters leads to truths and emotions being revealed in a manner that feels organic and unforced. If there were to be complaints about the fun, fast paced and touching ‘Guardians of the Galaxy Vol. 2’; there are times toward the end of the film that the pacing drags its heels slightly, and the lightning in a bottle feel of the soundtrack to the first film is missing, with less recognisable songs being used, and in a less engaging way… Although since ‘Suicide Squad’ ripped off the ‘Guardians of the Galaxy’ soundtrack idea, perhaps this is no bad thing.
In all, ‘Guardians of the Galaxy Vol. 2’ is a rare thing; a sequel that almost lives up to the original. There is tons of fun, heart and action in the film, and James Gunn has managed to make antagonists from the first film those that the audience roots for this time around. ‘Guardians of the Galaxy Vol. 2’ is a gem that is going to keep fans happy and certainly set the box office alight; we can’t wait to see what Volume 3 brings. I am Groot, indeed!
RATING: 4.5/5
Review by Brogen Hayes

Review by Brogen Hayes
4.5
I am Groot!