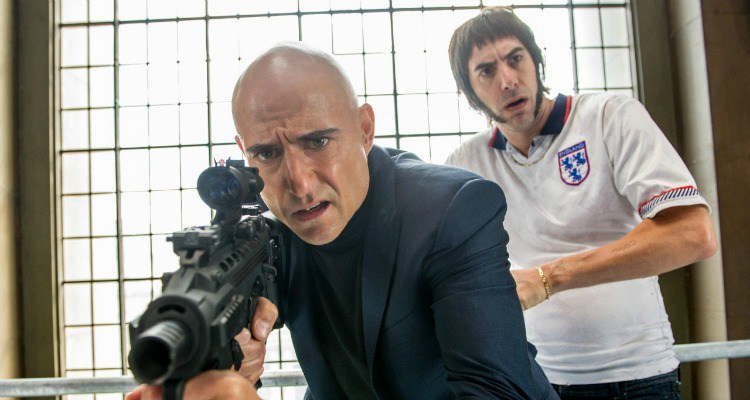 GRIMSBY (UK/USA/15/83mins)
Directed by Louis Leterrier. Starring Sacha Baron Cohen, Mark Strong, Isla Fisher, Rebel Wilson, Penelope Cruz, Johnny Vegas, Ian McShane.
THE PLOT: Superspy Sebastian Grimsby (Strong) quickly wishes that his long-lost brother Nobby (Cohen) had stayed well and truly lost when the chalky welfare scrounger to his cheesy action man hero effectively become a team. Sebasian has spent his life becoming the perfect MI6 agent, a deadly assassin with an even deadlier girlfriend. Nobby, on the other hand, has been shitting out kids – “10 or 11” – with his equally slobbish wife (the omnipresent Wilson) when he’s not unleashing football chants at the top of his lungs.
When the world is threatened by the fiendish Rhonda George (Cruz – one of the few here seemingly having fun), the two brothers must reunite though, and become, well, just like every other crimefighting buddy-buddy duo riding that thin line between loathe and hate.
THE VERDICT: After the disappointments of ‘Bruno’ (2009) and ‘The Dictator’ (2012), Sacha Baron Cohen plays it purely for laughs with ‘Grimsby’ – and thus avoiding any off-putting socio- or geo-politics. Which might make commercial sense, on paper – pale imitation Denis Leary was always going to sell out bigger venues than his unfiltered, if no less ambitious, blueprint, Bill Hicks – but it leaves you with a film that barely manages to keep the fart jokes going for even 83 minutes.
Not that jokes about bodily functions aren’t hilarious, of course, Cohen managing to deliver quite a few penetration and poo jokes that land straight in the middle of the rectum, but the smudge-smudge, wink-wink quickly wears thin here.
Perhaps it’s all to do with the edit, some of ‘Grimsby’’s sharper, nastier jokes that popped up in the trailers missing in action here.
RATING: 2/5
Review by Paul Byrne