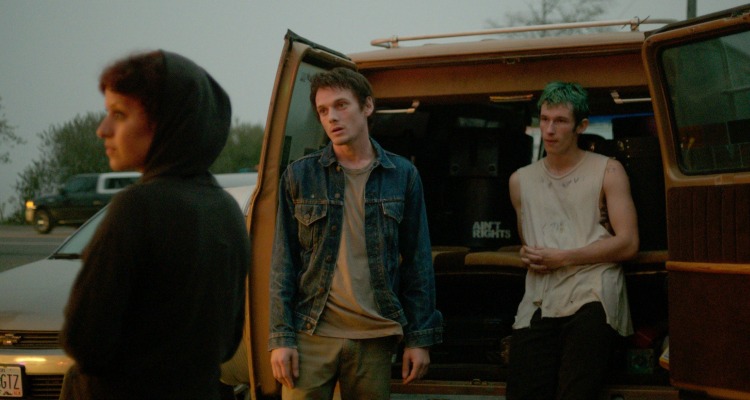 GREEN ROOM (USA/16/95mins)
Directed by Jeremy Saulnier. Starring Anton Yelchin, Imogen Poots, Alia Shawkat, Macon Blair, Patrick Stewart.
THE PLOT: Punk band Ain’t Rights travel the country picking up gigs and making enough money for petrol and food. When a gig is badly managed, the organiser promises a better one at a bar his cousin knows… A white supremacist bar in the middle of nowhere. After the gig, the band stumble across the aftermath of a murder, and suddenly find themselves in an unrelenting and violent fight for their lives.
THE VERDICT: Alia Shawkat, and Anton Yelchin as part of the punk band Ain’t Rights make their characters fearless in that 20-something punk band type of way, but once the action kicks off, Yelchin and Shawkat come into their own, carefully balancing fear and bravado in a way that makes us root for these small, outnumbered underdogs. Imogen Poots plays Amber, a regular of the bar, caught up in the crossfire; her chemistry with Yelchin is sweet, but Poots makes sure the audience knows this is a girl with a seriously dark undertone. On the other side of the barricaded door to the green room Patrick Stewart leads the charge against the young interlopers, stepping away from some of the more comedic roles he has done of late to make Darcy quietly spoken and terrifying. Of course, Stewart gets some brilliantly dry and hilarious lines (‘can you hear me if I speak at this volume?’) and the double act between he and Macon Blair, and their slight push and pull of power, is a joy to watch on screen.
Saulnier’s screenplay for ‘Green Room’ is incredibly simple – often frustratingly so, as we never truly know what spurred the initial murder – but it is also this simplicity that makes the film work. Jokes recur throughout the film, with the cast making spectacular use of the question of who their ‘Desert Island Band’ would be; initially naming the bands that sound cool (Slayer, The Misfits) before recanting as their situation deteriorates to give us an insight behind their swagger (Madonna, Prince, Simon & Garfunkel). While the screenplay is gruesome – often prompting gasps of disgust and shock from the assembled audience – it is also darkly hilarious as it plays with horror movie clichés to wonderful effect.
As director, Jeremy Saulnier plays with tension and fear, allowing both to build before they are dispelled with a carefully placed laugh or a gentle moment. The film feels a little like ‘The Raid’ in places; a claustrophobic, dark and violent fight for survival, but Saulnier never truly allows ‘Green Room’ to be anything other than inspired by other great surviival and war flicks. The action comes in bursts, is often blood spatteringly gruesome, and is definitely not for the faint of heart. This never becomes gratuitous though, and always feels in keeping with the characters and the story being told. The pacing is strong throughout the film, but runs out of momentum a little once the action moves outside the bar, but Sean Porter’s cinematography plays with colour and light, leaving the entire film feeling breathless and weirdly beautiful.
In all, ‘Green Room’ is twisted, massively violent and darkly hilarious. While it may be light on story in places, and suffer some pacing issues, it is also draws the audience into this unfamiliar world, and leaves us to fight our way out with the characters. Shawkat, Yelchin, Stewart and Blair shine in this film. Can’t wait to see which colour Saulnier tackles next.
RATING: 4.5/5
Review by Brogen Hayes