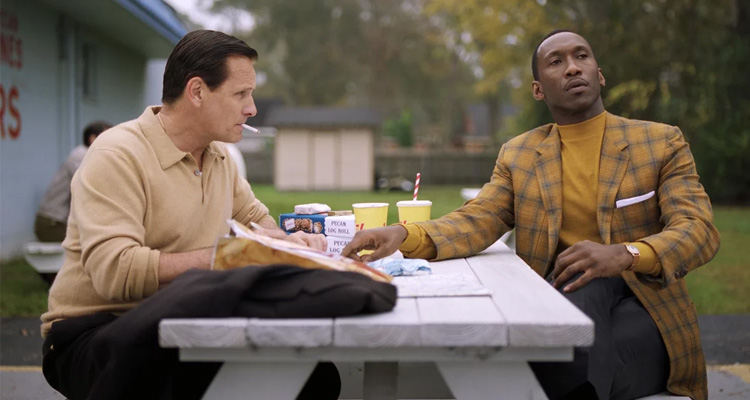 In short: A page turner

The Plot: New York, 1962. Tony (Viggo Mortensen) is an Italian-American wise guy who works at a nightclub. He’s known to be handy when things get heated between customers. With the club shutting down for renovations for two months, Tony goes looking for temporary work. Or rather work comes looking for him. He attends an interview with doctor and noted concert pianist Don (Mahershala Ali). Don is undertaking an extensive 8-week tour of the Deep South, where he’ll be playing at a number of fine establishments along with his support players. He needs a driver and companion to accompany him, someone who can flex his muscles and his brain if trouble comes calling in the segregated Deep South. Tony takes the job, leaving his wife Dolores (Linda Cardellini) behind for now. They hit the road, whereupon they discover that their chalk and cheese personalities have more in common than they think…

The Verdict: Sometimes noted comedy directors can genuinely surprise us when they take on something more weighty and ambitious. Adam McKay certainly did with The Big Short and more recently Vice. Who’d have thought that one half of the Farrelly Brothers had it him to mature from gross-out comedies to a touching and perceptive dramatic film like Green Book? Peter Farrelly has branched out on his own with this true-life story, the kind that Oscar voters will admire for its outstanding performances and powerful message about tolerance in a sadly still racially divided America. However, this is no mere Oscar-baiting film. Instead, it’s a lovely character portrait of two very different men on a road trip who find common ground. It doesn’t need Oscar nominations to prop it up or convince audiences to see it.

The script, by Farrelly, Brian Hayes Currie and Nick Vallelonga (son of Tony) is essentially a two-hander that initially zeroes in on how different these men are from each other. They’re separated by race, class, culture and family status. Tony is a casual racist, who throws out glasses used by the African-American men who work in his Bronx family apartment. He’s a bit of a slob too, regularly stuffing his face with food and using colourful language. He’s a family man of the world, knows how it works and how to use it to his advantage. Don, on the other hand, has isolated himself inside his ivory tower. He’s refined and regal, a gentleman who wants to make a point by travelling through the Deep South to change white people’s perceptions. He also has little knowledge of his own culture’s music and is distant from his family.

That’s a potentially explosive combination for a road movie, but the best road movies are about people changing over the course of the journey. Not completely of course, but enough to suggest that these two disparate characters learn from each other for the better. That’s what so skilfully achieved in this script, which deftly balances out humour, poignancy, strength of character and recoiling horror at the ugly face of institutional racism. It’s done so delicately that one doesn’t even notice the subtle tonal shifts when the script requires it. Mortensen and Ali respond in kind to the script, summoning the kind of well-judged performances we’ve come to expect from them. Then they impress even more by layering their performances with complexity and a warm, fuzzy sense of humour about them.

Farrelly has really outdone himself here. He’s made a message movie that doesn’t feel the need to ram its point home with a sledgehammer. Instead, he uses a pickaxe to chip away at racism, exposing its ugliness enough to make his point that we’re all united by one thing – our common humanity. Along with lots of laughs of course. Green Book is serious when it needs to be, but this is a funnier film than it sounds. It’s sophisticated comedy though, which shows a maturity on Farrelly’s part to move on from juvenile 90s jokes. With two actors at the top of their game, an excellent, nuanced script and sterling direction, Green Book is a page turner that comes highly recommended.