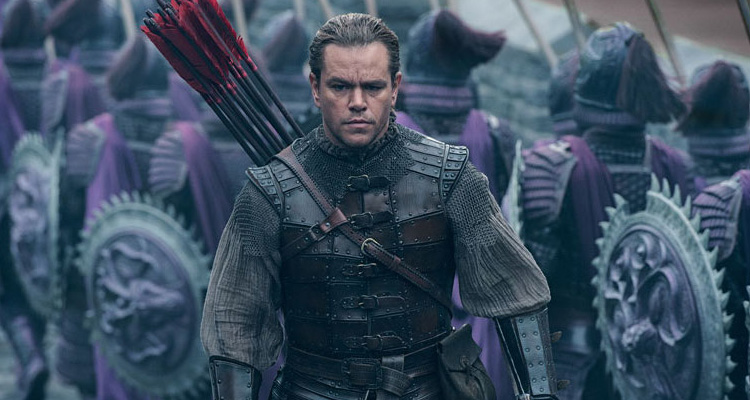 THE GREAT WALL (China | USA/12A/103mins)
Directed by Yimou Zhang. Starring Matt Damon, Pedro Pascal, Willem Dafoe, Tian Jing, Andy Lau
THE PLOT: Mercenaries William (Matt Damon) and Tovar (Pedro Pascal) journeying to find gunpowder find themselves taken prisoner by The Nameless Order at the Great Wall of China, but before punishment can be dealt out, the Wall is attacked by Tao Tie; mythical monsters who attack every 60 years in an attempt to take over the world. William and Tovar find themselves confronted with a choice; fight or die.
THE VERDICT: Only released in Irish cinemas this week, ‘The Great Wall’ has already been the subject of controversy when Asian actress Constance Wu accused the movie of white washing, saying “We have to stop perpetuating the racist myth that [only a] white man can save the world”. Ouch. The fact of the matter is that ‘The Great Wall’ is almost entirely populated with Asian actors, is helmed by Chinese director Yimou Zhang, and is the largest and most ambitious film ever to be shot in China.
Matt Damon leads the show as William, a mercenary who fought for food as a child, and for money as an adult. Damon manages to give William a moral compass and, even though there is a distinct whiff of contractual obligation about the whole thing, and Damon’s accent is a mess, manages to make William a character that the audience can root for. Tian Jing plays Commander Lin, soldier for The Nameless Order and a woman of tenacity and grace. Lin has little to do other than bark orders and follows Damon’s but there are times when the pair manage to have at least a little chemistry together on screen. The rest of the cast features Willem Dafoe, Andy Lau, Pedro Pascal, Hanyu Zhang, Lu Han and Junkai Wang.
Carlo Bernard, Doug Miro and Tony Gilroy’s screenplay seems to have taken inspiration from the feat of engineering that is The Great Wall of China, and then thrown a dollop of fantasy on the top with the monstrous Tao Tie. The dialogue is not all that exciting, and there are attempts at buddy camaraderie between Damon and Pascal that comes and goes, but the ridiculous and over the top fantasy elements of the story are fun that doesn’t need to be thought about, and at least the romance between Damon and Jing is only hinted at, and not shoehorned in.
‘The Great Wal’l is director Yimou Zhang’s first film in the English language, but it is worth mentioning that at least half of the dialogue is in Mandarin. Zhang does well with the Mandarin portions of the film, as well as the pacing and making the set pieces as over the top and mostly impressive as possible, but the timing for some of the scenes in English, as well as the dodgy CGI in the film manage to bring ‘The Great Wall’ down from a daft actioner that’s a lot of fun, to something a lot less sophisticated. Oh, and hadn’t we moved past 3D on these sorts of actioners?
In all, ‘The Great Wal’l is daft, over the top and fun in places, but struggles with balancing the spark between English and Mandarin, as well as making the CGI scenes – of which there are many – look halfway decent or as though they belong in the same film as the beautifully shot live action sequences. Oh and as for Constance Wu’s thoughts on the film; it is true that most of the cast and crew are Asian, but it is still Matt Damon who ends up saving the day, so Wu’s statements are definitely justified.
RATING: 2/5
Review by Brogen Hayes