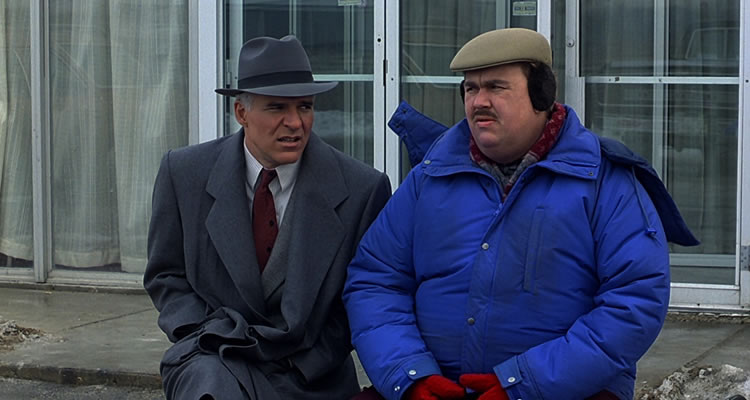 Great movies about Planes… From ‘Snakes on a Plane’ to ‘Planes, Trains and Automobiles’

‘Sully: Miracle on the Hudson’ is released in Irish cinemas this week. Based on the true story of Chelsey “Sully” Sullenberger, the pilot who was hailed as a national hero in 2009 when successfully landed US Airways Flight 1549 in the Hudson River off Manhattan, New York City. The plane had been struck by geese, which damaged the engines, but all 155 passengers and crew on the flight survived.

The film, directed by Clint Eastwood, follows the aftermath of the accident, when Sully (Tom Hanks) learns that National Transportation Safety Board is angling to have the incident deemed as pilot error, a claim Sully strongly believes to be untrue.
To celebrate the release of ‘Sully: Miracle on the Hudson’ in Irish cinemas, Movies.ie has taken a look back at other great movies to feature planes.

SNAKES ON A PLANE
Ten years ago, the director of ‘The Final Destination’, David R. Ellis, brought a whole new meaning to Ophidiophobia with ‘Snakes on a Plane’. Samuel L. Jackson plays FBI agent Neville Flynn, tasked with protecting federal witness Sean Jones (Nathan Phillips) as they fly from Hawaii to LA for the trial. The trouble is that the 0plane is also carrying a cargo of snakes that are deliberately released to kill Jones, causing chaos and panic in the skies.
‘Snakes on a Plane’ garnered considerable internet buzz before its release, and as well as audience members cheering and applauding throughout the film, it was well received by critics. Even though ‘Snakes on a Plane’ is B-Movie perfection, the film did not do as well as expected, so we are unlikely to see a sequel any time soon.

FLIGHT
Pilot Whip Whittaker (Denzel Washington) is a highly functioning alcohol and drug user, but when a plane he is in charge of crashes, the investigation threatens to throw Whip’s entire way of life into chaos.
‘Flight’ is a fictional film, screenwriter John Gatins said the film was loosely inspired by the 2000 crash of Alaska Airlines Flight 261, which was caused by a broken jackscrew. Director Robert Zemeckis made the plane crash in ‘Flight’ utterly thrilling, but this came as no surprise to audiences, since the plane crash in Zemeckis’ 2000 film ‘Cast Away’ was harrowing to watch.

CON AIR
After being honourably discharged, Army Ranger Cameron Poe (Nicolas Cage) is given a ten-year prison sentence on charges of manslaughter for using excessive force on a drunk man who attempted to assault his pregnant wife Tricia (Monica Potter). When Poe is paroled eight years later, he and other prisoners are transported to Alabama on the “Jailbird”, a C-123K transport prison aircraft. Poe is due to be released when he arrives in Alabama, but his hopes for the future are put into jeopardy when the other prisoners on the plane take control of the craft.
Although it was not incredibly well received at the time of its release in 1997, ‘Con Air’ went on to make over $224 million at the global box office, and has gone on to become a cult classic, with fans repeatedly asking director Simon West when ‘Con Air 2’ is going to happen, if ever.

AIRPLANE!
Released in 1980 and starring Leslie Neilsen, ‘Airplane!’ is a satirical parody film, which focuses on ex-fighter pilot and taxi driver Ted Striker (Robert Hays) who has a pathological fear of flying, but tries to overcome his fear in order to win back his ex-girlfriend, by taking a flight on which she is working as a flight attendant. Ted Striker’s day goes from bad to worse when passengers and the pilot of the plane fall ill, and Striker is the only man qualified to land the plane.
‘Airplane!’ is a parody of the disaster film genre, and itself has been parodied many times in popular culture. ‘Airplane’ uses slapstick humour, puns and surreal humour, and has been voted one of the greatest comedy films of all time.

PLANES, TRAINS AND AUTOMOBILES
John Hughes’ 1988 film follows Neal Page (Steve Martin) as he tries to get from New York back home to Chicago in time for Thanksgiving dinner with his family. When a blizzard strikes, the plane is diverted to Wichita because of a blizzard, and Page finds himself striving to get home, with only Del Griffith (John Candy), an eternally optimistic, outgoing, overly talkative, and clumsy shower curtain ring salesman for company.
This odd-couple comedy was a change of pace for director John Hughes at the time of its release, since the writer/director was best known for his teen angst films at the time. ‘Planes, Trains and Automobiles’ was incredibly well received, with critics in particular praising John Candy’s performance as Del Griffith.

‘Sully: Miracle on the Hudson’ is released in Irish cinemas on December 2nd 2016. Watch the trailer below…