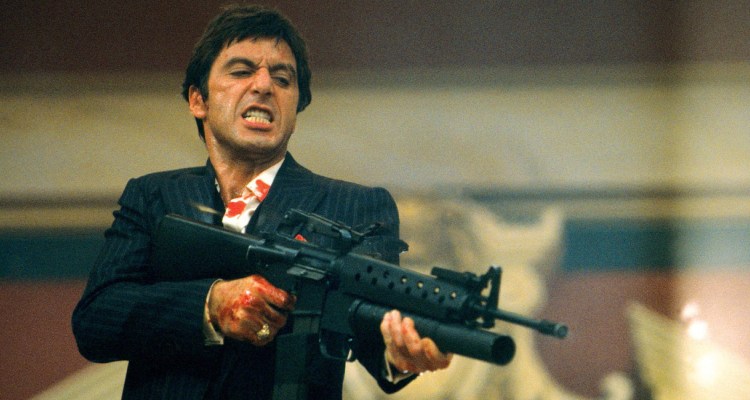 This week, ‘Free Fire’ is released in Irish cinemas. Directed by Ben Wheatley – ‘Kill List’, ‘Sightseers’, ‘High-Rise’ – the film is the story of what happens when an arms deal in a warehouse goes very, very wrong. Boasting a great Irish cast, including Jack Reynor, Cillian Murphy and Michael Smiley, ‘Free Fire’ is a claustrophobic shoot-‘em-up movie, so Movies.ie has taken a look back over other great movies that feature thrilling shootouts. Keep reading to find out more…

HARD BOILED
John Woo’s 1992 classic is the story of undercover cop Alan (Tony Leung Chiu-Wai) who teams up with Tequila (Yun-Fat Chow) to take down a vicious crime syndicate. ‘Hard Boiled’ features several thrilling shoot out scenes, including one in a tea house that kicks the entire film off, but the most exciting, violent and – let’s be honest here – ridiculous scene in the film is the climactic gun fight in a maternity hospital, during which Tequila and Alan must not only take down the bad guys, but save newborn babies and their mothers from the violence that erupts around them. Truly thrilling and just as bonkers as we have come to expect from director John Woo.
‘Hard Boiled’ has inspired many films, including Gareth Evan’s fantastic film ‘The Raid’, and last year it was announced that Ben Wheatley is to remake ‘Hard Boiled’ and last we heard, it looked likely that ‘High-Rise’ star Tom Hiddleston was set to join him.

SCARFACE
Brian De Palma proved that he knows how to direct crazy, violent and bullet ridden action with 1983’s ‘Scarface’, which tells the story of Tony Montana (Pacino), a Cuban immigrant who arrived in the US with nothing, and rose through the ranks to become the head of a drug cartel, building a multi-million dollar empire. Of course, Montana didn’t become as powerful as he was without making a few enemies, and those enemies were bound to catch up with him at some time.
“Say hello to my little friend!” who can forget Al Pacino’s classic line, as well as the violence that ensued when Montana knew that his enemies had him surrounded, decided to go out in a blaze of glory, complete with a machine gun and grenade launcher. ‘Scarface’ has not only become an iconic film, praised by many, including Martin Scorsese, but it has become part of movie culture and has been extensively referenced in music, comic books and video games.

THE MATRIX
Released in 1999, ‘The Matrix’ not only made stars of writer and director duo Lana and Lily Wachowski, but kicked off the trend of movies using the slow-mo technique known as “Bullet Time”. Although the second two films in the franchise got muddled and confused, the first film, in which computer programmer Neo (Keanu Reeves) learns the truth about humanity; they are held captive by machines, and the reality most of the population perceives is a simulation created to keep humanity subdued. Neo and his compatriots rebel against the machines with the view of freeing humanity.
Although the “Bullet Time” sequences in ‘The Matrix’ are a lot of fun, it is the lobby shootout near the end of the film that we are here to celebrate. Neo and Trinity take on a lobby full of agents with a bag full of guns. Carnage ensues, pillars are shot out and no-one who opposes our heroes gets out alive. Slow-mo abounds, and it is clear that Reeves is having a lot of fun taking down the bad guys and showing off his long black coat… And so are we!

GROSSE POINTE BLANK
Since high school, Martin (John Cusack) has thrown himself into his career as a professional assassin. When he is sent on a mission to Grosse Pointe in suburban Detroit, it turns out Martin knows this place well; it’s where he grew up, and by startling coincidence – cunningly organised by his secretary Marcella (Joan Cusack) – his high school reunion is taking place at the same time.
Toward the end of the film, having reunited with Debi (Minnie Driver) the one that got away, Martin realises that his contract is to kill her father Bart (Mitchell Ryan). Of course, Martin abandons the contract, but Martin’s friend Grocer (Dan Aykroyd) takes the hit and lays siege to the house where Martin, Debi and Bart are holed up. During the siege, Grocer and Martin get the chance to talk and finally settle out the issues between them, as Martin takes down the Grocer’s mercenaries, the NSA and finally, Grocer himself. The shootout is full of dialogue and quips and, since this is where the film has been leading all along, is cathartic on a number of levels.

NO COUNTRY FOR OLD MEN
The Coen Brothers’ 2007 film ‘No Country for Old Men’ stars Josh Brolin as Llewelyn Moss, a hunter who stumbles across the aftermath of a violent drug deal gone wrong; including a suitcase containing $2 million. Moss takes the suitcase and flees the scene, sealing his fate. Merciless hitman Anton Chigurh (Javier Bardem) is sent after Moss to recover the money, using his signature method of killing to get rid of anyone who stands in his way; a captive bolt pistol.
While on the run from Chigurh, Moss hides out at a hotel in Eagle Pass, but by the time he realises there is a tracking device in the money he has stolen, Chigurh has already found him. The shootout that ensues goes from the motel to the street, and although both Moss and the man sent to kill him make it out alive, they do not do so unscathed; proving that while the Coens do wonderful comedy, their skill at creating tension is second to none.

‘Free Fire’ is released in Irish cinemas on March 31st 2017. Watch the trailer below…