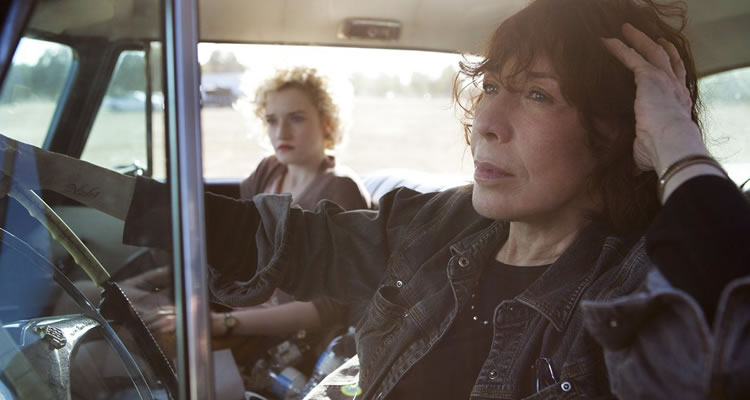 GRANDMA (USA/16/19mins)
Directed by Paul Weitz. Starring Lily Tomlin, Jedy greer, Marcia Gay Harden, Julia Garner, Laverne Cox
THE PLOT: After her girlfriend of four months breaks up with her, Elle’s (Lily Tomlin) granddaughter Sage (Julia Garner) turns up at her door. Still in school and facing an unwanted pregnancy, Sage is looking for money for an abortion, money that Elle simply doesn’t have, after making wind chimes from her credit cards. Elle sets out to help her granddaughter, with a little help from old friends and acquaintances, but the path doesn’t always run smoothly.
THE VERDICT: It is hard to believe that not only is ‘Grandma’ Lily Tomlin’s first lead role in a movie in 27 years – her last was in ‘Big Business’ in 1988 – and that this witty, cutting and honest film is brought to us by Paul Weitz, whose first film was the teen comedy ‘American Pie’.
‘Grandma’ lives and dies on the shoulders of Lily Tomlin as Elle, and she is on wonderful, acerbic, caring and funny form as the lead character. Throughout the film it becomes clear that years of hardship and loss have made Elle a tough woman, but she still has layers of kindness under the surface. Tomlin’s timing – both comedic and dramatic – is wonderful, and she is smart, witty and just a little bit cruel. Julia Garner does well as Elle’s young granddaughter, and doesn’t allow Tomlin’s experience and presence to force her to the background. Marcia Gay Harden turns up as an angry and overwrought mother, Laverne Cox plays a kindly tattoo artist, Judy Greer plays Elle’s recent ex, who doesn’t stand for her shenanigans and Sam Elliott finally gets to play an emotive character for the first time in what feels like years.
Paul Weitz’s screenplay is smart and witty, but it is also incredibly cleverly constructed, allowing the audience to understand the characters, even if we only see them for a moment, and for vital information about Elle and her past to be revealed through conversation, with the audience left to fill in some of the blanks themselves, instead of through clunky exposition. Weitz’s story takes a look at the life of one woman in one day, but reveals much about Elle, the time she grew up in, and the loves and losses she has had along the way.
As director, Weitz allows Tomlin to be both agitator and commentator, and the one around whom the story revolves. The film is incredibly well paced, with the end of the film coming far too soon in this 79 minute movie. The audience could happily have stayed with Elle for much longer, but it is the mark of a well made movie that it does not outstay its welcome.
In all, ‘Grandma’ is funny, tragic and wonderful, with Lily Tomlin’s performance leaving us all wondering just why she has not had a leading role in so long. Weitz’s script is witty and well observed, and the supporting cast are strong in their small roles.
RATING: 5/5
Review by Brogen Hayes