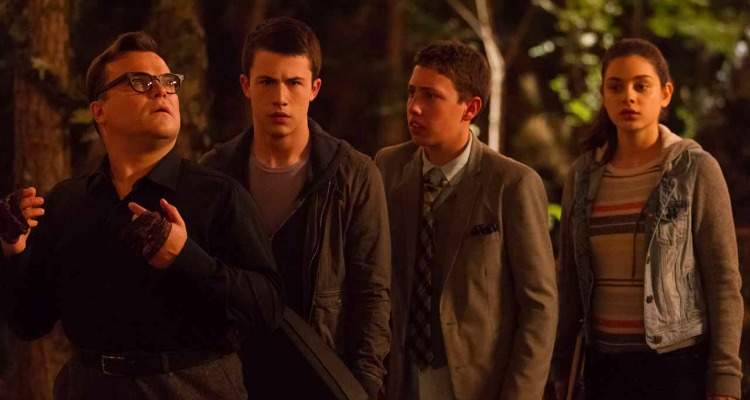 GOOSEBUMPS (USA | Australia/PG/103mins)
Directed by Rob Letterman. Starring Jack Black, Dylan Minette, Odeya Rush, Ryan Lee, Ken Marino, Amy Ryan, Jillian Bell.
THE PLOT: When Zach (Dylan Minette) and his mother move in next door to Mr Shivers and his teenage daughter Hannah (Odeya Rush), it is not long before Zach discovers the secret that Mr Shivers is trying to keep; he is actually the author R.L. Stine and, when the original manuscripts for his famous books are opened, the monsters inside are set free into the world. It is up to Zach, Hannah and Stine to save the day, and put the fictional monsters back between the pages of the books again.
THE VERDICT: There has been talk of a ‘Goosebumps’ movie for many years now, and with over 180 books in the series and a successful TV show in the past, this is not surprising. Although there is a feel of Jumanji 2 about the entire ‘Goosebumps’ affair, the film is surprisingly fun, filled with nostalgia and plenty of scares for the younger ones in the audience.
Jack Black leads the cast as Mr Shivers, later revealed to be the author of ‘Goosebumps’, R.L. Stine, hiding out under an assumed name. For those who fear that Black is in full over the top, high kicking mode, you are in for a surprise; although the actor does get quite a lot of strong one liners, he is unusually subdued, and brings a sense of weight to the film that it benefits hugely from. Amy Ryan doesn’t have a lot to do except play a mother, Jullian Bell has a couple of good scenes as Zach’s aunt Lorraine and Ken Marino turns up for a handful of scenes as the high school coach. As far as the kids go, Dylan Minette, Odeya Rush and Ryan Lee as Champ are all fine in their roles, making each character distinct and charming enough for the film to work.
The screenplay, written by Darren Lemke does not focus on just one of Stine’s ‘Goosebumps’ stories, and instead makes the clever move of making the film about Stine himself and the monsters he creates through his imagination. As mentioned, there is a feel of Jumanji about the film – although this is not a bad thing – and even though the film is never going to be truly scary for anyone over the age of 14, there is fun to be had with this adventure movie about the misfits saving the day.
Director Rob Letterman has created a fun and over the top adventure in ‘Goosebumps’; one that has a nostalgic feel and is not afraid to be a little dark and a little scary – bucking the seeming recent trend that kids films have to be light and fluffy. The film struggles with pacing during the establishing scenes, but once the first book is opened, the film gets a much needed kick into gear. The characters are underdeveloped however, and although there is a lot of fun to be had with the film, there is a feeling of familiarity mixed in with the nostalgia that works against the film as a whole.
In all, ‘Goosebumps’ is familiar but fun, and camp and over the top as you could hope. Black carries the film in a toned down role, but none of the characters are particularly well developed. The Monster Mash is the main attraction here, and it works well as an adventure movie, just don’t expect the characters to be anything more than stereotypes.
RATING: 3.5/5
Review by Brogen Hayes