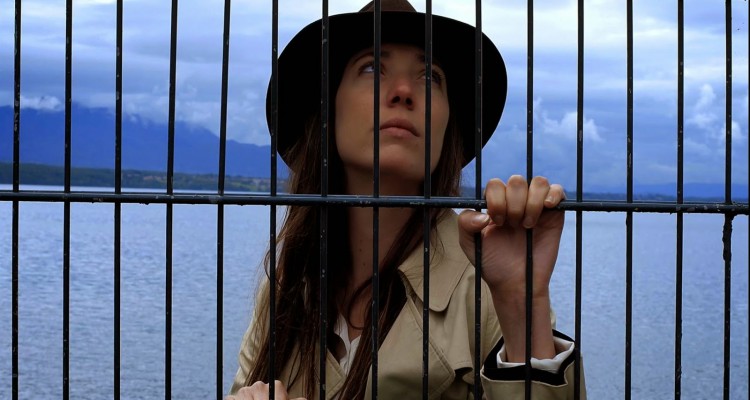 THE PLOT: Legendary director Jean-Luc Godard bids farewell to the spoken word in this examination of how we use words, and a giddy exploration of 3D. Oh and there’s a dog too.

THE VERDICT: I have to admit, I was not particularly prepared to watch a Godard film when I went along to see GOODBYE TO LANGUAGE 3D, but if I was frazzled going in, that is nothing compared to how I felt walking back out, 70 minutes later.

Mercifully, GOODBYE TO LANGUAGE 3D is relatively short at 70 minutes, the bad news is that the audience feels every second of the running time as Godard plays with images, dialogue and 3D to create a headache inducing mish-mash that is as inscrutable as it is disjointed.

Godard embraces the gimmick of 3D with apparent relish, and proceeds to play with it as much as he can; text is laid on both the 2D and 3D layers, and images are framed in such a way that they jump out at the audience. Godard also embraces the fact that two projectors are used to create 3D on screen, and creates a headache inducing experiment from this.

In brutal honesty; there is no story, just a series of existential questions asked and answered; characters talk about sex and death while one of them is using the bathroom, many discussions take place naked and there is a dog, for some reason. Nothing here is coherent, so if you go in searching for an eloquent story – either through images or dialogue, or both – then you are searching in the wrong place. Add to this that a lot of the footage was captured on GoPro and phone cameras, and the audio drops in and out whenever it wants, and GOODBYE TO LANGUAGE 3D becomes a frustrating affair.

In all, GOODBYE TO LANGUAGE 3D tries to play with the separate notions of image and dialogue, while making 3D even more gimmicky – if such a thing is possible. Godard either believes his own myth, or wants to audience to think he’s making a profound statement, when really he is playing a prank on all of us, and this is the material that should have been on the cutting room floor. Either way, GOODBYE TO LANGUAGE 3D is a messy, incoherent and inscrutable affair.