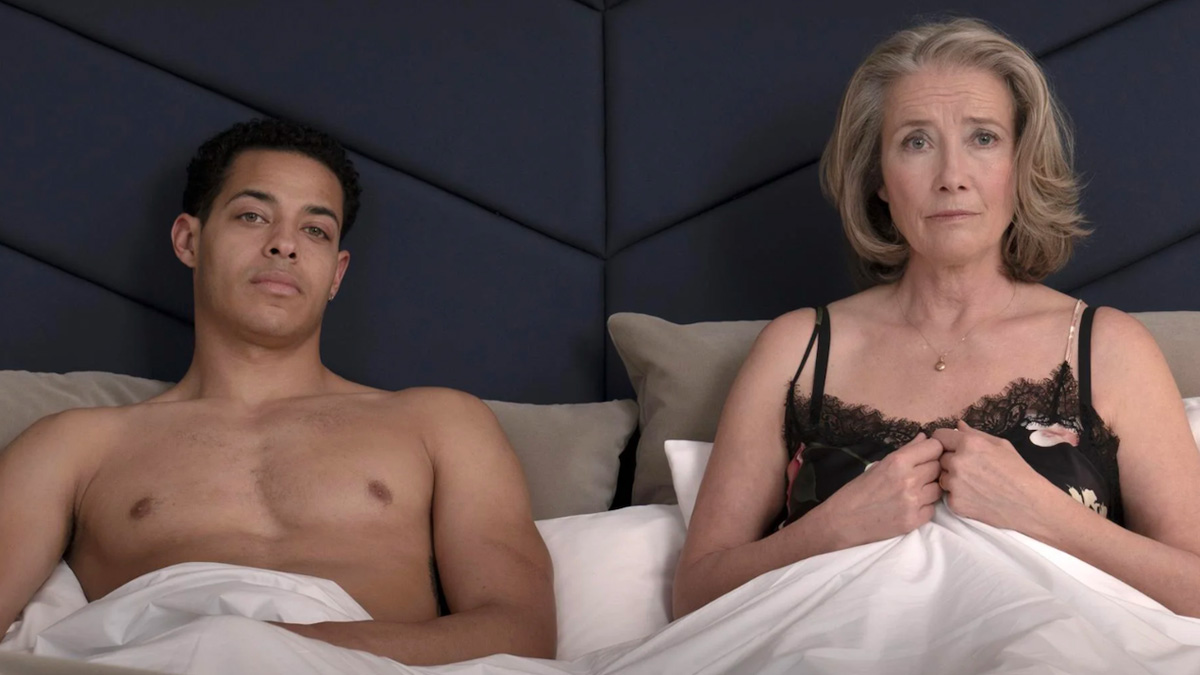 The Plot: Fiftysomething widow Nancy Stokes (Emma Thompson) has lived a remarkably uneventful life. A former schoolteacher who drilled religious education and moral values into her students, she’s lived her life in the slow lane and never strayed from it. That is, until today. She’s booked a hotel room where she meets up with twentysomething sex worker Leo Grande (Daryl McCormack). He’s a charismatic young Irishman who encourages her to just relax and give herself over to absolute pleasure…

The Verdict: At face value, Good Luck To You, Leo Grande has the kind of plot that sounds queasy and off-putting. An older woman pays a young man for chat and good sex in a hotel room where they have several sessions. They get to know each other and decide what needs to be done between the sheets, like some sort of checklist that has to be worked through before it all gets too expensive. So far, so sleazy. Dig deeper though and the film is not what it appears to be. Therein lies the surprise behind this rather charming and mature take on consenting adults enjoying themselves and getting over any guilt complexes that might otherwise undermine their motivations. Pretty Woman (or Man) this isn’t. Although it peddles the fantasy element of what happens in hotel rooms between strangers, it’s also rooted in a recognisable reality – and a melancholic one at that.

First-time feature writer Katy Brand’s carefully considered script is essentially a two-hander between two very different characters. Nancy has lived an unfulfilled life, previously married to a man for three decades who was as regular and unvaried as clockwork – including his husbandly duties. She describes her two grown-up children as a dead weight around her neck and is uptight about even being in a hotel room with a stranger, thinking of the physical act like an ordeal to get through. She wants to feel young again. Her companion Leo puts his customers at ease, working through their nerves and concerns in a pleasant, understanding and consensual manner. He’s not as cast-iron confident as he appears though, harbouring a difficult childhood and hiding the truth from his estranged family. What could these two disparate people possibly have in common other than a financial transaction to be completed? Quite a lot actually, grounded in the power of the human need for connection.

Brand works hard to portray these characters sympathetically, with the majority of the film being essentially two people talking about their lives for just over 90 minutes. And yet it’s quietly gripping and gets under your skin, before shedding the clothes to show some actual skin (hats off to you, Emma Thompson). It’s also light on its feet due to Sophie Hyde’s unfussy direction which simply points the camera at her actors and lets them take over. It’s a more confident and self-aware effort than her disappointing, Dublin-shot previous feature Animals. The Irish connection continues with a star-making turn from Pixie actor Daryl McCormack as Leo Grande – an older female fantasy made flesh, but with a heart and a soul to come with the package too. His natural chemistry with Thompson is evident from early on, the result of spending time together off-camera and not requiring an intimacy co-ordinator to orchestrate what goes where and when.

While McCormack certainly makes an impression, this is ultimately Thompson’s film and she’s a joyous bundle of nerves. Her character arc is so clearly defined that there’s a welcome release in the closing chapter that wraps up the story neatly when it otherwise could have ended up like a messy bed. She’s delightful to watch, a British national treasure as much as Helen Mirren or Julie Walters. Stories about older female sexuality are a rarity even in these more enlightened times, which makes the film a brave attempt to tackle it in a meaningful and fulfilling way. Admittedly, Hyde and Brand conveniently gloss over the more tacky, controversial elements of the plot to make it a more audience-friendly film. It wouldn’t be the same thing if the genders were reversed, would it? However, it is a film that not only has decent laughs but a beating heart. It’s also thoughtful and life-affirming enough to reinforce that it’s never too late to enjoy yourself. It might just surprise you.

In short: Rather charming