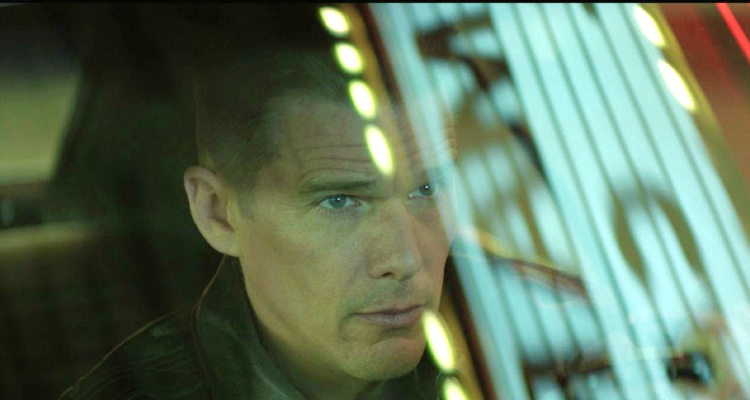 THE PLOT: Experienced wartime pilot Tom Egan (Ethan Hawke) begins to question his reasons for doing his job, when his job evolves into that of a drone pilot.

THE VERDICT: GOOD KILL sees Ethan Hawke reunite with director Andrew Niccol for the third time – after Gattaca and Lord of War – in a tale about a pilot who finds himself grounded behind he controls of a drone flying over Afghanistan.

Hawke does well with what he is given, but his hands are tied with Andrew Niccol’s script, which supposedly planned to have Hawke’s character slowly descend into boredom and loneliness, but just ended up making him a secretive man who is unkind to his fickle wife. Zoe Kravitz takes on the role of drone rookie Vera Suarez and again, has precious little to do. The rest of the cast is made up of January Jones, Jake Abel and Bruce Greenwood.

Andrew Niccol’s script has an interesting idea at it’s heart; pilot placed behind the controls of a drone is bored due to the nature of his safe job, but in creating a film about a character who is bored, Niccol has only succeeded in making a boring film. Much of the screen time is either spent watching Hawke drink or watching him watch people on a video monitor. There is a mildly distracting subplot that sees the CIA step into take control of proceedings, but instead of this galvanising the team, it just leads to some sassy backchat from the soldiers.

As director, Niccol completely fails to make the film engaging after the first 15 minutes, and allows the film to devolve into watching people watching people. There is more than enough of this to prove the point about boredom, and it is not long before this becomes as boring for the audience as it is for the characters. The film’s pacing is a mess, and the final salvation for Hawke’s character is hardly a flag waving moment, meaning thatGOOD KILL goes out with a whimper.

In all,GOOD KILL is a boring film about people being bored. There is very little to engage here, with badly written characters and a plot that feels almost non-existent.