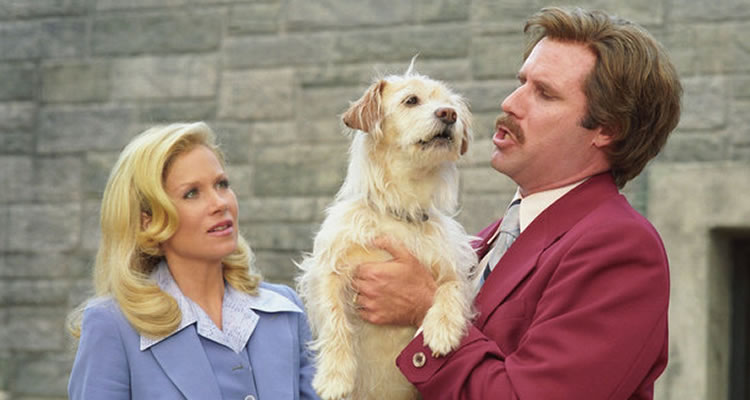 Good boy! – Some of the best movie dogs

ABSOLUTELY ANYTHING is released in Irish cinemas this week; directed by Terry Jones, the film sees aliens grant an ordinary man the ability to do… well… Absolutely Anything, to see if he uses the power for good or for ill.

As well as Simon Pegg as Neil, and the voices of all the surviving Monty Python boys, the film stars the late great Robin Williams as the voice of Dennis, Neil’s dog.

Noted sci-fi writer Douglas Adams looked over the film’s script before his untimely death and declared the scenes with Dennis the dog to be the best in the film, and with this in mind, Movies.ie has taken a look back at some of the best dogs in the movies…

Not only was THE ARTIST a resounding success when it premiered at the Cannes Film Festival in 2011, Uggie the dog walked away from the prestigious event with the Palm Dog Award, given to the best canine performer at the festival.
In the film, Uggie not only performs tricks, and has bags of character and charm, but he also saves Jean Dujardin’s character George, when he accidentally sets his house ablaze. Good dog indeed!

Beethoven – BEETHOVEN
In this 1992 family comedy – written under a pseudonym by the king of the 80s teen movie, John Hughes – is the tail (sorry!) of a St. Bernard dog named after the composer Ludwig van Beethoven, owned by the Newton family.
Beethoven helps the kids in the family overcome their various problems – talking to boys, dealing with bullies, and being unaware of danger – but is wanted by ruthless dog thieves. Interestingly, Buster Keaton’s widow Eleanor, trained the dog Beethoven for the film.

Toto – THE WIZARD OF OZ
In THE WIZARD OF OZ, Dorothy is swept away to the magical land of Oz with only her little dog Toto for company. Toto remains at Dorothy’s side all through their adventures in Oz, and it is Toto that exposes the Wizard to be an ordinary middle aged man. Although this is some good work from the cute canine, Toto nearly ruins everything after he chases a cat, meaning Dorothy almost gets left behind in Oz. Oops!
Toto was played by a dog named Terry – whose name was later changed to Toto – and although this was her only credited role, Terry appeared in 16 different movies, and was paid $125 a week for her work on THE WIZARD OF OZ; more than some of the human actors earned on the film,

Dug – UP
After Carl and Russell land the flying house in the mysterious Paradise Falls, they meet the friendly dog Dug. Dug wears a collar that allows him to speak and, although he is fiercely loyal, he is often distracted by the imagined presence of squirrels.
Dug is a fun loving and loyal creature, who helps Carl and Russell when Charles Muntz turns out not to be the hero that Carl thought he was. Dug also has his own short film, titled DUG’S SPECIAL MISSION.
SQUIRREL!

Baxter is the loyal companion of permanent bachelor and party boy newsreader Ron Burgundy. Although he does not have the ability to speak, his barks are subtitled throughout the film, and it seems he and Ron Burgundy have developed such a strong bond that Ron is able to understand him.
It seems Baxter meets his end in ANCHORMAN when a motorcyclist callously kicks him off a bridge into a river, but he returns at the end of the film to save Ron and Veronica from an angry bear. Baxter speaks wisely to the bear, and convinces her to leave the humans alone. Man’s best friend indeed!

Honourable Mentions to…
Zero from THE NIGHTMARE BEFORE CHRISTMAS, Hooch from TURNER & HOOCH and the hero of all dogs, Lassie who first appeared on screen in 1943’s LASSIE COME HOME.

Do you have a favourite movie pooch? Let us know in the comments below.

ABSOLUTELY ANYTHING is released in Irish cinemas on August 14th 2015. Watch the trailer below…