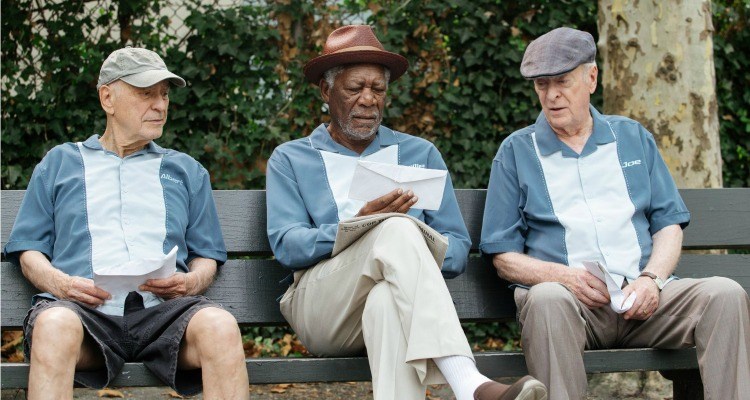 GOING IN STYLE (USA/12A/96mins)
Directed by Zach Braff. Starring Michael Caine, Morgan Freeman, Alan Arkin, Ann-Margaret, Joey King.
THE PLOT: After he witnesses a bank robbery, and learns that not only has his pension vanished, but his mortgage repayments have trebled, septuagenarian Joe (Michael Caine) convinces his lifelong pals Willie (Morgan Freeman) and Albert (Alan Arkin) to pull off a daring heist, a heist on the very bank that dissolved their pension fund.
THE VERDICT: Directed by Zach Braff, and based on the 1979 crime caper film of the same name, ‘Going in Style’ is a charming film that lives and dies on the performances and chemistry between Arkin, Caine and Freeman.
Michael Caine leads the cast as Joe, a man who has refinanced his home, and finds himself in trouble when his pension vanishes and his mortgage trebles. Caine is not afraid to goof around and play up his age in the role, and his relationship with his friends and family in the film is warm and charming. Alan Arkin plays a more curmudgeonly character as Albert, and obviously has a whale of a time playing a cranky man who constantly talks about when he is going to die, and being “too old to hold a grudge”. Morgan Freeman plays Willie, a character with a secret, who just wants to “live better than I am”. The rest of the cast features Peter Serafinowicz, Christopher Lloyd, Joey King, Matt Dillon and Ann-Margaret.
Screenwriter Theordore Melfi – who previously brought us Hidden Figures and St. Vincent – has adapted the 1979 version of the film for this new remake. The story differs greatly from that of the original, making it less of a far-fetched caper, and more of a slightly less far-fetched justice by robbery tale, as well as a story with a warm heart and a decidedly happier ending. There are plenty of laughs throughout the film, and the central trio bring warmth and heart to their relationships with one another and their families. There are times when the warm up to the crime seems particularly over the top and unnecessary, however, and the ending of the film feels longer and more drawn out than it possibly needs to be.
As director Zach Braff steps away from the particular brand of existential whimsy that he is known for, and makes a heist film with plenty of laughs and heart. Braff shoots and directs the film like a crime caper, while adding in music choices that fans may not expect from the director. There are issues with pacing throughout the film, as well as some scenes played for laughs that do not necessarily fit in with the tone of the rest of the story, but with ‘Going in Style’, Braff proves that he is not just a one trick pony.
In all, ‘Going in Style’ is a warm and charming comedy that sometimes struggles slightly with pacing and tone. That said, Arkin, Caine and Freeman are wonderful together, and while it may seem like we have seen films like this before, there are enough laughs and charm to the film to make it an enjoyable ride, where the audience cannot help but root for three men who are obviously at the end of their tethers.
RATING: 3.5/5
Review by Brogen Hayes